Elle Burton is a Guide to Winged Creatures from Fiori

By: Naoki, Cub Reporter for the Fiori Gazette

We are four days into the Blog Tour for Elle Burton’s newest release. “Missing” launched rather quietly a few months ago. Now it’s time to set off some fireworks and share the newest angels and demons confrontations in the Lessons from Fiori series with all of you.

I’ve decided to interview Elle so you can all learn more about her.

Elle lives in Menomonie, Wisconsin on a hill above Lake Menomin.

The area is filled with farms and is close to the Twin Cities in Minnesota, the Wisconsin Dells, Milwaukee, and other “go-to” destinations around the Great Lakes.

Lakes Tainter and Menomin in Dunn County, where Elle Burton lives, have been created by dams, making boating and fishing one of the most common activities in and around Menomonie during the summer months.

Elle, you were only ten-years-old when you were enlisted by the winged creatures from Fiori to help them protect the children of earth. That’s a pretty big responsibility for a little girl.

Sometimes it can be miserably hard, but mostly the Fiorins help me and let me know what I need to do to help the kids. Usually, it’s something as simple as making sure a child watches both ways before they cross the street or to help when the class bully is giving another kid grief. I try to follow all the rules, but sometimes it’s hard.

What kind of regulations do you have trouble with, Elle?

Well, I’m what’s called a guide to the Fiorins. Because I’m a guide, I can use wish travel and go anywhere to help a child. But, we’re supposed to use a very specific address or location to use as our destination. When JJ, my little brother, was kidnapped I wished myself to the Fiorin warrior, Amadeus. Unfortunately, I dragged Jimmy with me, and we ended up in the middle of a big fight with a monster Zorin.

It’s awful that I broke the rules. Because I didn’t follow them, I put Jimmy Backus and everyone else at risk. If it hadn’t been for the magic of the pendant Mother Blue gave me, we could have lost Pegasus too. I put everyone’s life at risk because I ignored the rules. No one ever has the right to break the rules. They are there for a good reason. If you don’t like them, you can grow up and try to get them changed when you’re smarter.

What do you enjoy most about living by Lake Menomin?

That’s easy! I love all the chipmunks. We sometimes tie fishing line around a peanut and put it out on the ground for them. They like to chase the peanut around. Most of the time, we just give them the nuts without making them work for them.

I love to swim, but we usually go to the swimming pool at Wakanda Waterpark. It’s close to my house, and we don’t have to worry whether the water in the lake is turning green again or not.

Poppy, my real dad, asked me to be sure to teach JJ how to fish someday. I’m not very good at it yet, but hopefully one day I can take JJ down to Wolske Bay and teach him how to fish off the dock there. If the water’s green, I’ll probably see if I can’t take him up to Wheeler and let him fish on the Hay River. There’s a place there where Poppy used to teach me fishing.

I understand you lost your father in the fighting in Afghanistan. I’m sorry for that. He was serving in the U.S. Army, wasn’t he?

Yes, he was brave, and he was a hero too.

My mom got a letter from the President of the United States when he died.

I started a collection of Teddy Bears last year for the kids who’ve lost parents in the war over there. I was so excited that the people here in Menomonie were able to donate so many bears for us to give all the kids like me who lost a parent in that awful war.

Is there anything that frightens Elle Burton?

Well, I don’t stick around long if I see a spider or a snake.

What frightens me most, though, are the monsters who try to hurt people. You 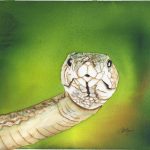 never know when one of them will appear.

The magic pendant from Mother Blue helps protect me from evil, but most kids don’t have anything like that.

Obviously, I’m not the only one who’s afraid of monsters. Most kids are, but some of them won’t admit it.

I’m frightened by all the yelling and stuff on the television right now, too. It’s hard to understand why everyone can’t get along and be kind to each other. Don’t the adults realize how much all the fighting and yelling affects their kids?

How can we go to sleep at night and feel safe when the adults are all fighting so hard?

I don’t know, but that may frighten me even more than the monsters. It makes me wonder if our nation really will be a safe and free place for people to live.

Do you have any hobbies? 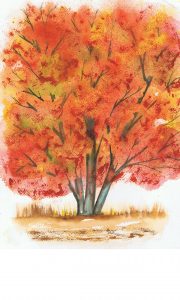 I love to paint with watercolors. My fifth-grade teacher taught me how to draw the picture on paper first and then color it in with the watercolors.

It’s crazy how the color moves with the amount of water you put on the watercolor paper and how it stops if the paper’s dry. Did you know you can sprinkle sea salt on wet watercolor paint, and it will make sparkles? You can do it to make stars in a night sky.

I love all the tricks you can do. My autumn tree won a red ribbon at the Dunn County Fair last year.

Grandma Statler is teaching me how to crochet. We made my mom a dishcloth, but I didn’t get the end finished quite right, and it started to come apart when she put it in the washer.

I started taking ice skating lessons last winter so I can play girl’s hockey in junior high school. There’s no way to guess whether I’ll be good enough to get on the team or not.

That’s about it. With all the stuff I have to do to be a guide to the Fiorins, I don’t have a lot of time for other activities. Maybe I’ll get involved in some other things in junior high school.

I love anything that has to do with arts and crafts, so I know I’ll be doing more stuff as I get older and have more opportunities.

Do you know what you want to be when you grow up?

I understand you can make yourself invisible. That must be fun.

No, it isn’t. I can only use the gift of invisibility to help a kid in trouble, so it’s never a fun time when I become invisible.

It’s impossible for me to use it to play pranks or anything like that. It’s a critical gift, and I’m the only guide who has ever been able to make the magical pendant work to make me invisible. I’m dedicated to doing it right. 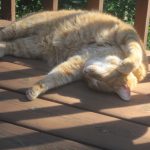 That funny old cat? Why he came to our house a couple of years ago. He marched right up to me on the deck and made himself at home. We don’t know where he belongs, but he wears a collar, so he belongs to someone. He likes to share his life with us, and we don’t mind having him visit.

He gets along really well with all the Fiorins, so that’s a good thing. It would be awful if he tried to eat them or something. 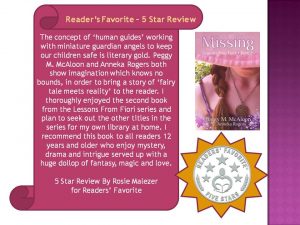 Yes, I’d like to remind everyone that they need to be kinder to each other. Too many 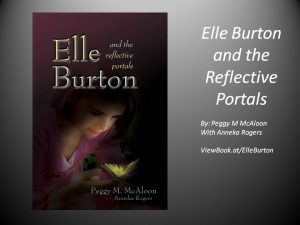 kids are being bullied at school every year, and I think these kids are mean because they have parents sometimes who are bullies too.

God teaches us in Sunday School to ‘Love one another’ and I don’t think he meant we could pick and choose who to love. He wanted us to be good to each other, and somehow we’ve forgotten that along the way. 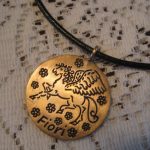 We are giving away copies of both books and the bronze replica of Elle’s magic pendant today. Here’s the Rafflecopter signup

You can learn more about Elle from the Lessons from Fiori series.

Elle Burton and the Reflective Portals and Missing are both on Amazon.

If you’d like to download a copy of the discussion sheet for book 1, you can find it here

If you’ve missed out on the tour, you can catch up at these sites: