How Were the Elle Burton Book Characters Developed?

That’s an excellent question, and I’ve heard it from many people. Who are the characters in the Elle Burton book? Do I know any of them?

So, let’s get started.

Ginny Burton is one of my beloved characters. My mother, Virginia Grimes was born in Missouri. She and her family moved to Washington, Iowa when she and her sister were quite young. I remember her stories of how much she missed her little friends from school in Missouri.

Mom, unlike the character named for her, was an interior decorator. She traveled all over the state of Iowa creating beautiful curtains for people’s windows, selling the paint that covered their walls and helping them choose furniture and accessories.

The doctors diagnosed Mom’s bipolar illness when she was in her forties. As you can imagine, we had some intense moments when she was on a manic high. For the most part, though, the medicines kept her illness under control.

I remember a woman who was more creative than anyone I’ve ever known. She was compassionate and helped others anytime she saw a need. Mom taught me to believe in guardian angels and to memorize bible verses. She was passionate about her faith and unyielding when it came to protecting her kids.

Mom loved to eat, so she had to learn to cook!

Mom loved to bake chocolate meringue pies, devils food cake, chocolate angel food cake, fudge, and chocolate chip cookies. I’ve developed her love of chocolate. I wrote a second book which has recipes that are gluten-free, using the character’s name in the Elle Burton books as part of the title.

Hint: If you add 3 Tbsp of cocoa to an angel food cake mix, you will instantly have created a great imitation of Mom’s cake. She always frosted it with 7-minute frosting that tasted like soft marshmallows.

I’ve known many people through the years who were bipolar, and they have been some of the most remarkable people I’ve ever met. I can’t think of a better role model for Elle Burton than the woman who raised my brother and me. She gave us the best she had, and we miss her dearly.

Tom Burton is, of course, my favorite character. He is carefully fashioned after my grandfather by the same name.

I can’t overstate how kind my grandfather was. He was my hero and my role model in life.

Wherever we went, he would engage strangers in conversations that endeared him to everyone he met.

Why did I kill him off early in the book? We buried my grandfather on the day the first man walked on the moon. It was and still is the hardest day of my life. If you’ve read the two books, you’ll know we have witnessed his angel persona in both books. He also plays a pivotal role in book three of the series, The Sacred Scrolls. (To be released in 2018)

So many of America’s children have lost a parent since the first Gulf invasion. We honor them when they die, but we don’t continue to watch out for the families who have lost a loved one. I needed kids reading the book to understand that everyone is affected by these losses and that sometimes we don’t handle loss in the right ways.

I’ve never heard any man or woman say an unkind word about my grandfather. He was a poor man in wealth, but in heart, he was the wealthiest man in the world.

He worked as a government meat inspector at the Morrell Meat Packing Plant in Ottumwa, IA after owning two restaurants. My brother and I toured the plant right before he retired. It was years before I could eat a hot dog again. That part of the production line still makes me sick to my stomach.

Now, we come to the character of Eunie Mae in the Elle Burton books.

My grandmother’s name was Eunie Mae Burton. She grew up as a Kennedy, and her ancestors came directly from Ireland. I remember how 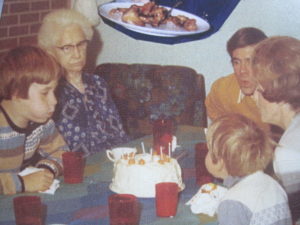 desperately she searched for family records so she could help Mom become a member of the DAR. Eventually, she had to regroup and follow the Burton line back to England.

As grandma’s story went, her great-grandfather arrived in the United States on one of the coffin ships. They were aptly named because her great-grandfather lost both his parents on the voyage across the ocean. She told me from the time I was a small child that there were two other cousins on the boat with him. One went north to Boston, and the other went to Virginia and later Kentucky. It was the cousin who went south to become a farmer who agreed to take the little orphan boy with them.

That little boy never knew exactly how old he was or when he was born. As close as I can tell from grandmother’s stories, he was four or five when he arrived in the United States.

I remember how excited my grandmother was when she received a funeral card and note from Rose Kennedy when JFK died. Grandmother was so proud of the cousin from Ireland who became President.

My grandma was the sweetest and funniest woman I’d ever met. She used to sing to me after the rheumatic fever when my legs hurt so badly I couldn’t go to sleep. That’s why the Fiorin, Eunie Mae, has the gift of song to quiet the babies in her care.

Grandma and Grandpa Burton were both boisterous snorers. Now, don’t ever tell anyone I told you this, but my brother and I still laugh at the solution the two of them came up with to get a bit of rest at night. They decided they wouldn’t be able to hear each other snore if they merely switched ends of the bed. Grandma kept her head at the top of the bed, and grandpa’s head rested at the foot of the bed.

I figure they must have loved each other with a passion, to put up with “foot-stink” for a lifetime!

Elle’s the kid I always tried to be.

I remember the day in PT class when one of my classmates undressed to put on her gym clothes. Everyone, except me, started laughing at 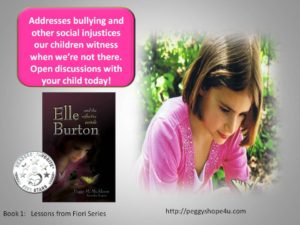 her. We were all wearing our first bras. This poor girl also had on a T-shirt. She had put the bra on over the T-shirt.

I asked her to come home with me (we lived right across the street from the school) during the lunch hour. That’s when I explained to her that the bra goes underneath. I still shudder when I remember that time. She had no idea why everyone was laughing and chose to laugh along with everyone else. What was her mother thinking, not to help her figure it all out?

Mother used to collect clothing to send to the children of Appalachia. I one-upped her by bringing kids home after school who didn’t have clean clothes to wear and giving them everything in my closet that didn’t fit anymore…and some that did.

Unlike me, Elle Burton has always been surrounded by loving and nurturing people. I often wonder if the abuse would have taken place if Grandma and Grandpa lived in the same town. If they’d been around, I’d have escaped to their house, and the truth would have come out.

Some readers think Elle Burton at ten is acting too old for her age. You’d be amazed at how mature an abused kid can be. I lost my childhood when I was only seven. I have no idea what a healthy ten-year-old girl should act like or think. So, Elle becomes what I remember of how I performed at that age.

I’m so proud that our granddaughter posed for the cover of the book Elle Burton and the Reflective Portals. Have I told you her first name is Elle?

I’m not overlooking Mr. Paws.I’ve dedicated a post especially for him.

That’s all for today.

So, the dearest people to my heart have a place in the book and their names will continue on. Are there other characters based on real-life characters? You’ll have to wait for another blog post for the answer to that question.

I hope you enjoyed a glimpse into the heart and soul of a writer. Our stories always have some basis in fact, not fiction. We take what we know and expand on it to create new characters.

I chose to use the real names for these characters because these four people are treasured, and I want their names to continue to bring joy to others.

Before you leave, please visit the books tab, click on Elle Burton and the Reflective Portals, and download the discussion sheet to use when talking about the book with your child..