Roe Didn’t Protect Us Back Then

Friday, as I watched the footage on the overturn of Roe v. Wade, I realized my cheeks were wet. How could that be? I’d know if I were crying, wouldn’t I? Like so many times in my adult life, I was instantly swept back to the past.

I was only seven. He was thirty-five.

To this day, I believe a daddy is a man who would lay down his life to protect his daughter. Is it a fantasy concept?

I was an adult when Roe v. Wade was passed. At that point in life, I believed I was strong enough to fight for myself. But, was I really?

As I sat and watched the television on Friday afternoon, I saw young girls jumping up and down in joy at the news. My God, how I envied them. I knew without a doubt they’d never been raped by a father, grandfather, uncle, or neighbor.

I watched them closely. So, what would it feel like to be that privileged? I couldn’t imagine growing up in a house where I felt safe.

Can You Imagine the Pain?

It’s impossible to forget that little seven-year-old in pigtails. She loved her dog Penny, books, and playing with her dolls. She weighed all of thirty-eight pounds.

I also remember how big he was. His hand was bigger than the side of my head. He weighed two-hundred, ten pounds. Do you know what happens to a kid that small with all of that weight on her? Her lungs cannot fill with that much weight on top of her. She feels like she is drowning.

I was that little girl. When I woke up each morning, I wondered if this was going to be the day I died.

The pain wasn’t only in my inability to breathe. The pain for a little seven-year-old kid was unbearable. I couldn’t understand why he kept insisting, “This is what a daddy is supposed to do for his little girl.”

Let that sink in.

At that point in time, I believed I wasn’t being “good enough” and he was punishing me for it.

Can You Imagine the Shame?

I finally found out what was happening to me when I reached the sixth grade. One of my classmates explained to me how babies are made.

That was the day I realized how intense the shame was I’d been feeling all along. Not only did I feel like I was being punished for not measuring up, I felt dirty for being made to do what my mom should have been doing.

I can’t stop watching all the young girls celebrating the end of Roe v. Wade. They look so carefree as they celebrate with their signs and flashy tops. When was the last time I felt like that? Sixty-seven years is such a long time to feel “less-than” everyone you meet.

Do you have any idea how much I envy your innocence?

Shame is a dangerous emotion. It elicits the worst in others.

There will always be a group of girls who know they can bully you and you’ll do absolutely nothing about it.

Then, there are the pastors who push up next to you when you are practicing the organ for Sunday services.

Don’t forget about the teachers who envision that Scarlet Letter on your chest. Why is my shame so visible they think they have the right to touch me. I don’t want their hands anywhere near me.

I envy your enthusiasm to protect every child.

My big problem is that some children shouldn’t have been created. My grandmother referred to them as the “Spawn of the Devil.” There was a young mother in our church who sat with her little boy way down front every Sunday. She had no husband and I always found that strange. People would nod at her after the service, but no one acted like they might be a friend. She was alone. I heard she was only fifteen when an older, married man in the community impregnated her.

Her little boy was adorable.

I’ve often thought about her. I grew up and moved away. Do they still consider her an outcast in the community?

What would have happened to me if I’d become pregnant?

Would they have forced me to carry a child and die in childbirth at the age of eight?

I know what would have happened. Mother would have visited the good Sisters out at St. Mary’s. We weren’t Catholic, but she had a strong friendship with them. They would have arranged to send me off to a Convent somewhere across the country. I wouldn’t be able to see my family or friends for the entire nine months.

Can you imagine the stories in that tiny community when I suddenly disappeared…possibly never coming back?

Yes, I envy you your position. I would give anything to have had a life sheltered from the ugliness that slides among us. There is an evil so pervasive, it seeps into us in tiny tendrils with each breath we take.

I envy you for never believing you were going to die because you can’t breathe.

Thankfully, life didn’t force you to endure the pain and shame I inherited at a time when I was far too young to make the decision to accept or reject it.

While you rejoice at the overturn of Roe v. Wade, I beg you to be a bit kinder to your sisters. This is not the time to boast of your victory. It is a time to respect the mourning of so many others. Some are people you care deeply about. They are women who have kept a dark secret the majority of their lives.

Would I have an abortion? My heart and soul tells me absolutely not. I’m a religious person, and I can’t imagine being in a position to have to make that choice. I understand how lucky I was as a kid it never happened…but it so easily could have.

I do understand the words of my gynecologist back in the 70’s who told me the abuse of my childhood caused so much damage that I would die if I tried to have another child. He shared that on the day my second child was born, two months premature.

Is it my decision?

I felt so much safer when I knew it was yours, too. 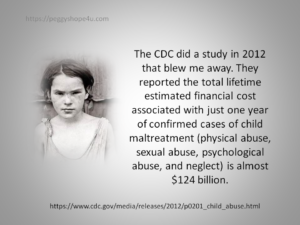 My father was a loud and proud Republican. To understand his ideology and behavior, you can simply look at Donald Trump. The two men are exactly alike. My father consistently repeated that women should be kept ‘barefoot and pregnant in the kitchen.’ He was one of the richest men in town and decidedly the most powerful. He controlled our church as one of the largest donors. There is no safe place for the child of a man like this.