Nettie abruptly turned to her stomach and buried her face in the feather pillow. One sneezing fit followed another. She clutched the pillow with both hands, trying to muffle the sound so she wouldn’t wake the baby. Her head spun as she remembered the promise she’d begged Bertha to make.

Not now, Lord, please, not now!

“Darling, are you ill?” Raymond’s hands gently held her shoulders.

Unable to breathe, Nettie shook off his hands and turned to her back, gasping for air.

Raymond touched his hand gently to her cheek. “You’re burning up, Nettie.”

Raymond jumped up from the bed and gently lifted the cradle, not disturbing the sleeping child. He carried the cradle to the hallway and returned to find Nettie sitting on the side of the bed. Her face was buried in her hands as she continued to sneeze uncontrollably.

Raymond grabbed his shirt and pulled it on over his head. Then, he retrieved the navy straight trousers hung over the chair. Lunging toward the wardrobe, he quickly donned his blue waistcoat and frock coat. “I’ll take the wagon to pick up Bertha and then go back to find the doctor.”

Nettie’s sleep was fitful as Bertha entered the master bedroom. She touched her friend’s forehead with the back of her hand, and her worst fears were realized.

Bertha fumbled with her cummerbund. “Please, Nettie, you’re going to be fine.”

The young mother sat up in bed as the violent coughing wracked her body.

Bertha rushed from the room to gather some wet rags from the kitchen. When she returned, Nettie was struggling to get out of bed.

Gently, Bertha pushed her friend back into the cotton mattress. “Easy, Nettie, you’ll be staying in that bed today. I’m in charge now.”

“Promise…” The coughing began again in earnest. “Promise – you’ll – marry Raymond – and raise – Marta – as your own.” Nettie could barely force the words out between the coughing fits.

Bertha Carlson’s cheeks were wet as she nodded her head. “Yes, Nettie. You know I would do anything for you. I love all of you with everything in my heart. Please, please don’t leave us.” She brushed at the auburn strand of hair that fell across her friend’s eye. She knew Nettie would never rest until she answered this one pressing question.

“Trying….” Nettie said. Her face displayed only the hint of a smile. She settled back on the bed, less agitated than before, and fell into a fitful sleep.

Bertha bathed her face, hands, and arms with the cool cloths.

Dr. McLaughlin quickly approached the bedside and motioned for Bertha to move back. His clothes were rumpled and it appeared the poor man hadn’t slept in days.

Raymond moved to the other side of the bed and took his wife’s limp hand in his own. Tight-jawed, he watched impatiently as the good doctor examined his wife.

“She definitely has all the symptoms of pneumonia.” Dr. McLaughlin stood upright. “I need some more pillows to prop her up to help her breathing. Cleansing her skin as you’re already doing with a cool cloth may help with the fever, but we’re seeing the congestion as the primary concern with the other patients. I’ve heard some practitioners back East are testing oxygen therapy, but I have no expertise in that technique.”

The baby started to cry in the hallway, and Bertha rushed out to tend to her morning needs.

The hours of the morning crept slowly by.

Bertha divided her time between caring for the child and seeing to her friend’s needs. By late morning, Nettie’s nightgown was wet with sweat, and Bertha shooed Raymond out of the room while she bathed her and changed her night clothing.

Nettie was sitting up in bed when Raymond returned with the wet nurse.

It was nearing midday, and sips of goat’s milk soaked in a piece of cloth were all Bertha could feed the baby during the morning hours. She was hungry and fussy.

Raymond didn’t think Nettie’s cough was as violent as it was earlier in the day. He spoke of their plans to go to St. Paul when the weather warmed in May to visit her parents and introduce their new granddaughter.

Nettie’s breathing appeared more labored to Bertha, but she hesitated to make any mention of it to Raymond.

The two of them chatted, overseeing Nettie’s needs until the sun began its decline in the western sky. When Nettie started coughing again, Raymond grabbed a white handkerchief and held it up to her mouth.

Bertha gasped when he pulled his hand away. The handkerchief was stained with mucus and blood.

Candles flickered in the room during the long night.

Raymond reacted as if he had been stabbed each time the rattle in Nettie’s chest escalated.

Numb with fear, Bertha continued to bathe Nettie’s arms and face with cooling water and administered another dose of the opium the doctor left for their use to ease her symptoms.

“Yes, darling?” Raymond leaned in to hear the nearly inaudible words. His eyes widened as he listened, looking directly at Bertha.

“I was going to say something,” she said.

“Please, Bertha. I can’t deal with this right now.”

“You don’t need to ‘deal’ with it Raymond. She was terrified. I made the promise to ease her mind. You don’t have to honor her request. I understand perfectly.” Bertha held her head high as she stood and turned.

“Please don’t leave, Bertha.” Raymond’s voice no longer held the strength it did in the pulpit.

“I need to get some water.” Bertha couldn’t look at Raymond as she left the room. It was difficult enough to try to remain composed.

The wet nurse returned early the next morning.

“I’m going to get a little something to eat, Raymond. Why don’t you clean up a bit before Nettie wakes? You’re beginning to have the scent of the mill workers.” Bertha heard him chuckle as she left the room, closing the door behind her.

The wet nurse was washing dishes in the kitchen when she walked in.

“Please, call me Bertha. It’s bad. I’ve never in my twenty-two years seen her this ill. I so wish her mother was here.”

“You’re doing all you can.”

“It obviously isn’t enough.” Bertha poured herself a glass of water from the pitcher on the wooden sideboard. “I’ve prayed during every spare moment over the past two days, but God isn’t listening.”

“Oh, He listens, ma’am. Sometimes his plan is different from our wishes.”

Bertha pondered that as she walked to the living room and looked out over the snow-covered yard.

Her attention snapped back when a heavy knock sounded on the front door.

She smoothed her skirt as she hurried to the door. One hand brushed her unruly hair behind an ear.

Dr. McLaughlin’s wife stood impatiently at the door. “I’m here to see the patient. The doctor is a bit under the weather this morning.” 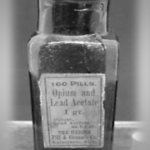 Bertha’s heart pounded in her ears. The doctor was ill.

“She’s in the bedroom. Please follow me.” She led the woman to the door of the master bedroom and knocked softly at the door.

Raymond opened the door, a question in his eyes as he took in the presence of Mrs. McLaughlin.

“My husband asked me to stop and inquire as to Mrs. Henson’s well-being. He also asked me to bring you another bottle of the medicine to ease her discomfort.” Her eyes held resolution, not promise.

Raymond took the bottle of opium from Mrs. McLaughlin. “Tell the good doctor things are about the same. I pray for your family’s well-being.”

The woman nodded as she turned and moved back to the front door.

Bertha followed and showed her out. When she returned to the bedroom, Raymond stood bent at the waist, hands on his knees; his body wracked with the painful sobs of a husband who was losing everything he held dear.

I want to comfort him, but I don’t trust my feelings.

She backed up and left the room.

Dark Before The Dawn

According to Raymond, she uttered only six words during the final hours of life. The first word she gasped as she struggled for breath was ‘Mother.’ As a minister, Raymond found it not unusual that a dying parishioner would call out for one she loved in death.

The second word sounded like ‘blue.’ This confused him, and he would ponder its meaning for years to come.

‘You’ and ‘knee’ were the third and fourth words. He struggled to make sense of it. Desperately, he searched his memory for rhyming words, thinking he misunderstood.

‘Marta’ and ‘Raymond’ were the final two words she spoke in this life. Hearing her speak those names was akin to having a dagger plunged into his heart.

The devoted husband held his wife in his arms as she took her final breath. He refused to let go of her as his body heaved with a cascade of grief.

Bertha stood quietly in the corner of the room, hands covering eyes already swollen from the tears she shed throughout that final day.

She had to nearly drag Raymond away from his wife thirty minutes later. As she washed Nettie’s hair and body, she heard the front door slam. The sound of Raymond’s scream from the yard echoed her similar desire for emotional release.

Bertha dressed Nettie in her wedding dress before wrapping her in a clean white cotton blanket. It was time to fetch the undertaker to remove the body. She shuddered, picturing the stone carriage house at the edge of town where the dead were stored until the ground thawed enough for a proper burial.

She tasted the bile at the back of her throat, barely making it to the bedpan before she vomited.

Bertha held Marta in her arms, singing softly. A fire crackled in the fireplace, giving the living room a warm glow.

The office door remained closed. Raymond had retreated there when the wagon came to collect Nettie’s body, and she hadn’t seen him since.

The wet nurse would return this evening, but before then they needed to talk about the funeral arrangements.

Bertha gently laid the baby in the cradle which had been moved by the chair where she had dozed most of the afternoon away.

Hesitantly, she walked over to the office door and knocked gently.

Some moments later, the door opened. Raymond’s bloodshot eyes stared at her, unseeing.

“Raymond, we need to make the arrangements. I suggest I take Marta to my house for the night after the wet nurse comes. You need time alone to mourn your loss. I mean no disrespect to Nettie’s memory, but we have a child who we are responsible for. Nettie expects us to rise to the occasion. I made a promise to help raise this child as my own. I cannot go back on my solemn vow.”

He simply stared at her.

“Raymond, Nettie lives on in that child over there, and I intend to do everything in my power to give her the life Nettie dreamed for her. Now, I can do this with or without your help, but I’m hoping you can pull yourself together and be the father Nettie wanted for her child.”

“Well, that’s it then. Collect yourself tonight while I give you some space to reflect. The baby will be perfectly safe.”

He barely responded with a slight tilt of his head.

“So, that’s all I have to say.” Bertha returned to the chair as the door closed quietly behind her.

If you haven’t read the previous chapters, you can find them below: