The Dragon and the Scholar Saga, Volumes 1-4 by H. L. Burke

What do you get when you take two scholars, a dragon, three princes, time travel, a rather nasty king, and a dollop of magic? You get an engaging saga from H.L. Burke that will keep you entertained for days.

This four-book series is the perfect solution for those who can’t get enough of the dragon lore from one book. For those who love romance, you will struggle as to whether you want Prince Ewan to regain his human form through magic or whether you wish him the freedom to remain a dragon and forever skim the earth as he floats through the clouds high above.

The Dragon and the Scholar Saga is a story about the most unlikely love, friendship, family fidelity, hope, and integrity in the face of unbelievable odds.

In this period of political upheaval, it’s refreshing to read a story where reasonable attempts to thwart the evil powers that would rule the people with an iron hand and no compassion exist.

I had initially purchased the book for my eleven-year-old granddaughter, but after reading the Kindle version, I’ve decided to hold onto the softcover version for a few more years. There is nothing in the book that is objectionable, but some of the scenes would create too great an imagination for a child her age.

Overall, the book was a fun and fast read. There were a few formatting issues with the combination of the four books on the Kindle, but nothing that would prevent me from enjoying all four books.  I started reading the softcover version. The combined books were too heavy; I decided to purchase the Kindle version to complete the read. (I love holding one book in my hands but four…not so much.) 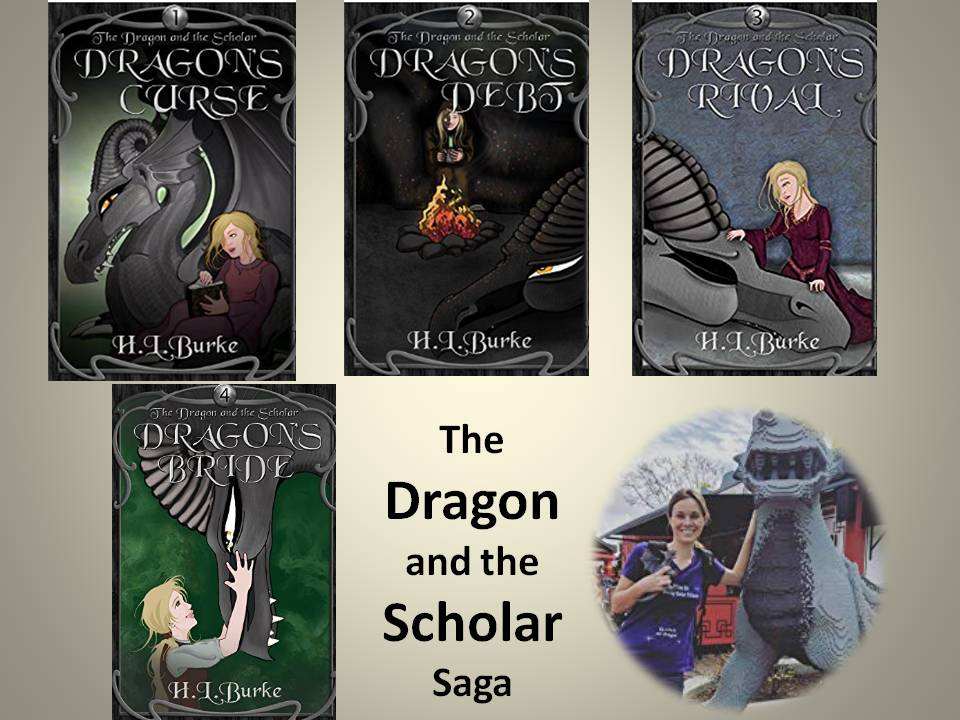 Can a Scholar tame an unruly Dragon?

The Dragon and the Scholar Saga, Book One
Fantasy/Romance

On her first assignment out of the Academy, young healer and scholar, Shannon Macaulay is summoned to the struggling kingdom of Regone to see to the wounds of a young but disabled king. When the unwanted attentions of an aggressive knight and the sudden appearance of a hated dragon turn her world upside down, she decides to take matters into her own hands even if doing so proves dangerous.

Finding herself drawn to the company of the dragon, Gnaw, Shannon must force herself out of her safe world of books and botany to come to the aid of her unexpected ally in a strange kingdom, cursed by a fateful encounter with a dragon and the loss of a beloved prince. Can she learn to put aside her fears, and perhaps sacrifice her deepest desires, to help a friend and restore a family?

The Dragon and the Scholar Saga, Book Two

Scholar Shannon Macaulay and the Dragon-Prince Ewan have been traveling together for a year when their blissful companionship is interrupted by a cryptic message from their friend Martin.

“Come to Westshire. Edmond needs you.”

Drawn to his brother’s aid, Ewan finds himself hunting an elusive monster: a winged beast kidnapping young women and stealing their memories. Its latest victim is the Princess Brighid of Westshire, the very girl Edmond has recently fallen for, to the disapproval of her temperamental father, King Riley, and stoic brother, Prince Ryan.

Ewan is determined to rescue his brother’s beloved, no matter what the cost. But when Ryan’s eyes fall upon Shannon, the dragon realizes the price might be higher than he is willing to pay.

The Dragon and the Scholar Saga, Book 3

Having abandoned his friends and family and taken to the skies, Ewan hides in the Wilderlands, away from humans. However, an unexpected attempt on his life and a warning from another dragon lead him to suspect that not all is right in Regone.

Ewan returns to his homeland to attend his brother’s wedding and discover the source of the bounty on his head. Once there the dragon prince finds that Ryan of Westshire has been using his absence to court the Lady Shannon.

With unknown forces working to undermine his brother’s throne and his own heart torn between his love for Shannon and the desire to see her happy, Ewan must choose once and for all. Is he a dragon or a man?

The Dragon and the Scholar Saga, Book 4

Dragon Prince Ewan has promised his beloved, Shannon, that he will become a man again or die in the attempt. Now he will do anything to make good on that promise.

With the aid of his scholarly friend, Martin, Ewan consults the great Dragon Queen Harviss, who offers him a unique solution: return to the past to find Ewan’s Fey ancestor and beg for her help. Leaving Shannon behind, Ewan and Martin travel to a dangerous past and fall into the clutches of a powerful Fey queen.

Meanwhile, Shannon finds herself alone and awaiting the birth of her first child. Unable to sit still with her husband absent, she joins with Ryan of Westshire in the prince’s desperate search for his young son. King Riley, however, will see Ryan dead before allowing him to find the lost child.

Can Shannon find a way to unite Ryan with his son? Or will the attempt cost her not only her life but the life of her unborn baby?

Will Martin and Ewan ever find the cure they seek or will they remain trapped in the past and Ewan separated from his bride forever?

Born in a small town in north central Oregon, H. L. Burke spent most of her childhood around trees and farm animals and was always accompanied by a book to read. Growing up with epic heroes from Middle Earth and Narnia keeping her company, she also became an incurable romantic.

An addictive personality, she jumped from one fandom to another, being at times completely obsessed with various books, movies, or television series (Lord of the Rings, Star Wars, and Star Trek all took their turns), but she has grown to be what she considers a well-rounded connoisseur of geek culture.

Married to her high school crush who is now a US Marine, she has moved multiple times in her adult life but believes that home is wherever her husband, two daughters, and pets are.

She is the author of a four-part fantasy/romance series entitled “The Dragon and the Scholar,” the Award Winning (2016 Realm Award for Young Adult Fiction) Nyssa Glass Steampunk series, and MG/Fantasy “Cora and the Nurse Dragon,” among others.