#1 in Spanish Literature: All This I Will Give to You

You can love someone completely. And yet, you may never honestly know them. All of us have secrets. After multiple decades of marriage, most people will share their innermost secrets with their spouse. Give Spanish Literature a try with the book “All This I Will Give To You.”  This engaging novel highlights the marriage between two men. Manuel Ortigosa is a prominent novelist and has published one book which was a raving success.

Manuel’s world suddenly turns upside=down when he learns Alvaro has died. Instead of the adoring husband Manuel trusted, Alvaro is a wealthy landowner with an estate and formidable family. Who can Manuel trust to get to the bottom of why Alvaro felt pushed to lie to him for fifteen years?

As the story unfolds, it reveals more and more secrets. From the missing wedding ring to the apparent ability of local officials to cover-up anything controversial within the confines of the elite family, Manuel’s life implodes.

What did Alvaro face during childhood that allowed him to keep his family a secret for fifteen years?

The story location in Spain offers a glimpse into the elite and those who serve them. You will be surprised by the ending of this mystery. The journey of Manuel is unforgettable and reminds us of the dangers of the secrets we keep. The range of characters and deception that ultimately affects everyone is a testament to an author who knows her characters intimately.

Enjoy your journey through the lives of the aristocracy of Spain and the sumptuous Galician Valleys with their crops of grapes and famous wineries. Your adventure begins in Madrid, but you will fall in love with the country before you finish the book.

The award-winning, bestselling international page-turner about the secrets and lies of one man that lead another into a treacherous house of strangers.

When novelist Manuel Ortigosa learns that his husband, Álvaro, has been killed in a car crash, it comes as a devastating shock. More shocks await Manuel when he arrives in Galicia where Álvaro died. The case has already closed quickly as a tragic accident. It’s also where Álvaro hid his secrets.

The man who was Manuel’s spouse for fifteen years was not the unassuming man he thought he knew.

Álvaro’s trail leads Manuel deep into one of Spain’s most imposing and guarded families. Behind the walls of their forbidding estate, Manuel is nothing but an unwelcome and dangerous intruder. Then he finds two allies: a stubbornly suspicious police lieutenant and Álvaro’s old friend—and private confessor—from seminary school. Together they’re collecting the pieces of Álvaro’s past, his double life, and his mysterious death.

But in the shadows of nobility and privilege, Manuel is about to unravel a web of corruption and deception that could be as fatal a trap for him as it was for the man he loved. 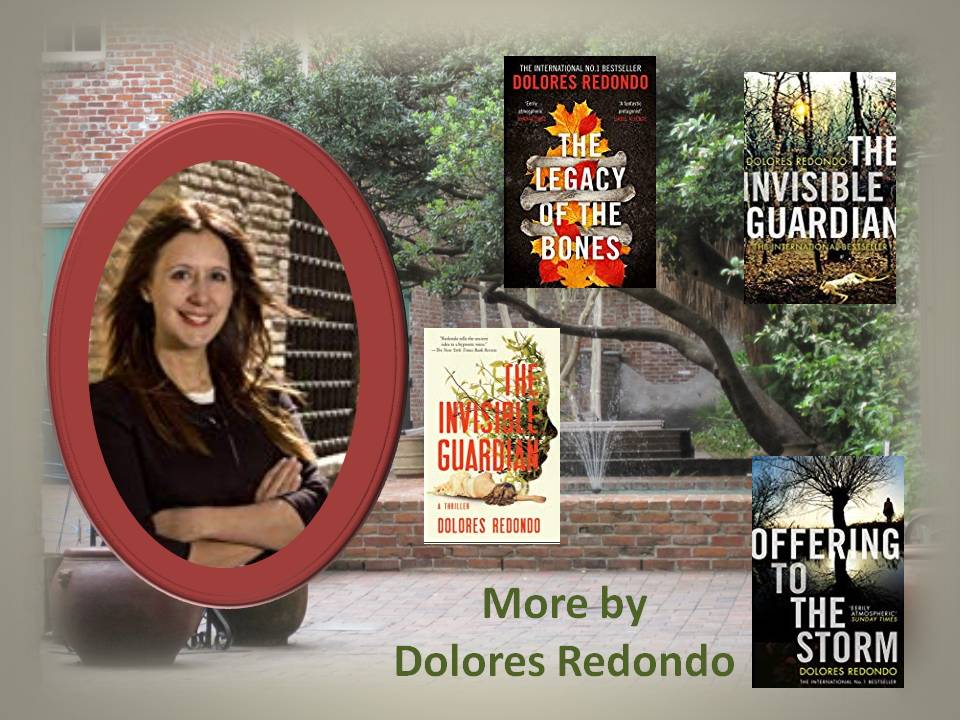 Dolores Redondo studied law and the culinary arts before writing The Baztán Trilogy, a successful crime series set in the Basque Pyrenees that has sold over 1.5 million copies in Spanish, has been translated into more than thirty-five languages and was adapted into a popular film series.

Redondo was twice nominated for the CWA International Dagger Award. She was a finalist for the Grand Prix des Lectrices de Elle. In addition, Redondo was the recipient of the 2016 Premio Planeta–one of Spain’s most distinguished literary awards–for her stand-alone thriller All This I Will Give to You. The book is optioned for feature film and television development and is translated into eighteen languages.