Every child…every adult can remember back to a time when someone inspired them. That inspiration could have been in the form of a small act of kindness that carried you through some pretty tough times. It may have come from an individual who inspired a faith in you that allowed you to blossom as you grew.

My greatest inspiration in life was my own grandfather. Everyone who met him remarked on what a wonderfully kind heart the man had. If I had one wish for every child in the world regardless of faith or color, it would be that they could find a way to inherit his kind heart. That passionate desire to help others was his hallmark and probably the greatest inspiration for my writing.

I was finally allowed to go stay with my grandparents in the summers for a whole week after my fifth birthday. The summers in Ottumwa were magical compared to the tiny town I lived in. We could take a real taxi downtown to a huge Department store. I had never seen a store quite like it before. There were magical things to study in every aisle. It even had a top-notch restaurant if we got hungry as we traveled from department to department, floor to floor.

The circus came to town while I was there that first summer and Grandpa decided to take me. Outside one of the tents they had eight ponies tethered to a center post under a tent top. For a quarter, you could ride a pony for five minutes. Grandpa walked patiently beside me as the pony traveled around and around. He was a sable brown with white spots and he had a white diamond on his forehead.

Grandpa asked me what my pony’s name was. I quickly told him the pony was named Charlie. I have no idea where I came up with the name, but from that summer forward I would ask to make the trip to Ottumwa on the week that the circus was in town. For many years Charlie was there to entertain me as Grandpa handed over quarter after quarter. Grandpa was happy to stand by the outer fence and watch me ride as I grew older and more capable on the pony’s back. He taught me not only to be kind, but to have patience with children.

There was a grade school near Grandpa’s home and he took me there to ride the Merry-Go-Round each summer. I especially looked forward to the trips to the playground because that’s where I first met the Guardian Angels. Grandpa was my most trusted adult. He knew just about everything! I knew I could believe him just as surely as I knew the sun would rise each morning.

As I flew around on the Merry-Go-Round, Grandpa would exclaim: “Look Peggy! Your Guardian Angels are dropping coins for you!” 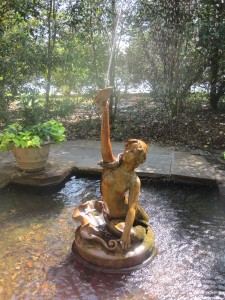 I would jump off the platform and race around the perimeter picking up nickels and dimes, quarters and pennies. I often wondered why my Guardian Angels only threw coins on that particular playground, but I didn’t care. Grandpa explained that they were always watching over me but that there was a special break in the heavens right over that very playground. He said that was where the angels could toss me the coins that would later be used at the circus.

I still believe in Guardian Angels and there is one who I know continues to watch over me and toss a shiny symbol of hope whenever I’m having a hard day. Grandpa never died because he lives forever in my heart. Those kinds of memories are the symbols of love and hope we need to share with children who are hurting.