This is a collection of three books from the award-winning author Judith Lucci. The primary character, Alexandra Destephano, grabbed my attention from the very first pages, and within a week, I had read all three books.

The wife of Louisiana’s Governor is discovered in her hospital bed unconscious and covered with blood, which sends Alex into a battle spiral into the deep, dark belly of the Big Easy, barely escaping with her life.

It’s hot in New Orleans, and crime has escalated all over town. When they discover the body of a hospitalized patient at a grisly murder scene, Alex must find the killer. But, it becomes impossible to differentiate between patient, staff, and friend.
Can anyone help her?

“A gripping medical thriller with numerous evil twists and turns that is unputdownable and highly recommended!”

“Will a deadly virus kill the President of the United States?”

An unknown, rapidly mutating virus kills a Secret Service agent guarding POTUS, and the situation worsens as terror threatens to continue to bring the Big Easy to its Knees.

“A roller coaster ride that never lets up – it’s impossible to put this book down. A gold medal read!”

It’s not often I binge read a trilogy. I think the last time was a James Patterson series. We’re down on the gulf coast right now, and when I saw the special price on this one, I jumped at the opportunity to learn more about Judith Lucci’s writing. Especially since we’re within a few hours of one of my favorite destinations: The French Quarter.

I found the writing to be clear, and the main character was a perfect choice. Alex has her law degree from Virginia, plus she has a nursing degree. She is in an ideal position to get the job of the in-house lawyer at one of the best hospitals in the nation. The fact that the hospital is close to the French Quarter allowed me to picture nearly every scene in my head quickly. I visited one of the voodoo stores a few years ago. It spooked me for weeks afterward. The voodoo threat at the hospital had everyone scrambling, including the police chief. When you add Alex’s new beau and ex-husband to the mix, things became dicey.

The plot was very engaging. If it hadn’t been, I wouldn’t have immediately started reading the second book. Whether you’ve been to New Orleans or have it on your bucket list, this series is a perfect primer for the craziness you can expect to find in every alley and on every street corner. When unknown sources unleash the fear of a voodoo curse on the hospital, Alex needs to employ every asset she can find to stop the panic.

The second book in the medical thriller trilogy brings violence and murder back to the hospital as the psychiatric unit becomes embroiled in the threats to the hospital. Alex Destephano, the hospital lawyer at Crescent City Medical Center, must again work with Commander Jack Francoise to solve the gruesome attacks on staff members and patients in the psychiatric department. With a Hospital Administrator who appears to care more about positive publicity than the safety of his patients and staff, Alex needs to try to resolve the issues and restore the hospital to normalcy. Whatever that might be in a city like New Orleans.

Warning: These books do contain some adult graphic content and may not be suitable for all readers.

The entire city of New Orleans is preparing for a visit from the President of the United States and members of Congress. Unknown sources release a virulent virus in New Orleans. As the cases begin to mount up, Alex is again at the center of the crisis. She leads the effort to work with the CDC, FBI, and Secret Service to determine who released the unknown agent and whether the impending political rally is the target for a large-scale attack.

Again, because we visit the Big Easy so frequently, I enjoyed the behind-the-scenes look at how the different factions of this city work together. From the standpoint of medical thrillers, I would give this trilogy a 4-Star rating. Yes, there are some editing problems, but nothing that caused me to stop reading. For those who like these types of books, you’ll enjoy the mystery and suspense Ms. Lucci weaves throughout her medical thrillers. 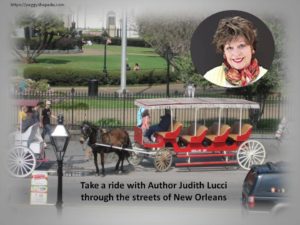 Judith Lucci is a Wall Street Journal, USA Today, and Amazon Best Selling author who loves to kill people – which is opposite what she’s spent her life doing. “I love to think of heinous ways to dispose of people – sometimes a lot of people- but it must be creative. I don’t use guns very often but rather rely on my medical background and research to figure out the best way to get the job done. Bullets are just too easy. I’m sure a psychiatrist would have a ball trying to figure out why someone who spent her life caring for people and saving lives, now spends hours each day in the creative pursuit of murder.”

She’s contributed to numerous anthologies, some of which are currently available on Amazon. Judith has recently claimed the prestigious status of a Wall Street Journal best-selling author. She is also a USA Today best-selling author. Her Cozy Mystery series, Artsy Chicks, is set at Massanutten Resort in the Virginia mountains, where she and several other artists and the local medical examiner, solve mysteries of deaths that occur at the resort.

Born and educated in Virginia, Judith holds graduate and doctoral degrees from Virginia Commonwealth University and the University of Virginia. In addition, she’s the author of numerous academic and health-related articles and documents. She loves to communicate with her readers at www.judithlucci.com.