A Glimpse into the Burton Family Heritage on July 4th

Every family in the United States celebrates the freedoms we sometimes take for granted on July 4th. As a descendant of a family who fought in the Revolutionary War, I have always felt pride in knowing my family helped found this nation. But, I can never forget the very fact they did that places a huge responsibility on my family and me.

Today, I am saddened by the treatment of other immigrants at the border and pray the men who lead this country will learn to honor the spirit of men like May Burton. These original Americans were willing to give up everything for their vision of life, liberty, and the pursuit of happiness in a brand new land.

Published in Chicago in 1884 by Goodspeed: Written by Isom Burton, a twin son of John Pleasant Burton

The Burton Family in the U.S.A. numbering at the present time (1880) over 80,000 are of English and Welsh origin. The first authenic account we have of our family in this country is the settlement of four brothers, John, Richard, Thomas, and Allen, near the present site of Richmond, Virginia in the year 1665.

All purchased large tracts of land in what is now Henrico County. Thomas and all married and reared large families, many of whom became distinguished in the military and civil life, among whom might be mentioned Colonels Robert and Huchins Burton, who served on General Washington’s Staff in the War of the Revolution, and the latter (Huchins) as Governor of North Carolina after the war. Robert Burton served as a member of the Continental Congress in 1787.

The Burtons in Virginia

Before the American Revolution, John Burton, Grandfather of Ambrose Burton, was living in Virginia midway between Richmond and Fredricksburg. Charles E. Kemper, in an article published by the William and Mary Quarterly, Vol. 8, No. 3, page 211 mentioned that John Burton died in 1735 in Caroline County Virginia. He married Susannah May.

John Burton’s son, May Burton (1715-1801) moved to Orange. This new location was southwest of Orange, the county seat. It was about twenty-five miles west of Fredricksburg and about the same distance east of the mountain ridge which now is called the Shenandoah National Park.

May Burton, Sr. served in the American Revolution. He was one of the petitioners of Orange County, Virginia. He died in Orange County in July of 1801.

This is the day we reflect on those who came before us to fight for our homeland. We accentuate our holiday through a feeling of love and devotion for this land that has given us so much. On July 4th we set aside our ethnic, cultural, and political differences to come together as ” one Nation under God, indivisible, with liberty and justice for all.”

We feel our patriotism in our souls. This feeling is different for each of us, but that makes it no less intense.

I can’t be in a crowd singing the National Anthem without finding tears burning at the corners of my eyes. Knowing how many generations of men have not only served in the armed forces of this country humbles me beyond description. The stories I have heard from those who suffered enormously as prisoners of war haunt my thoughts frequently.

On July 4th we come together and reaffirm the dedication to service of our forefathers. It’s a time to show the same compassion these great men and women did as they welcomed each new wave of citizens to the land we toiled to prepare for every man, woman, and child who swore to uphold our ideals and vision of a country we love enough to be willing to die for. 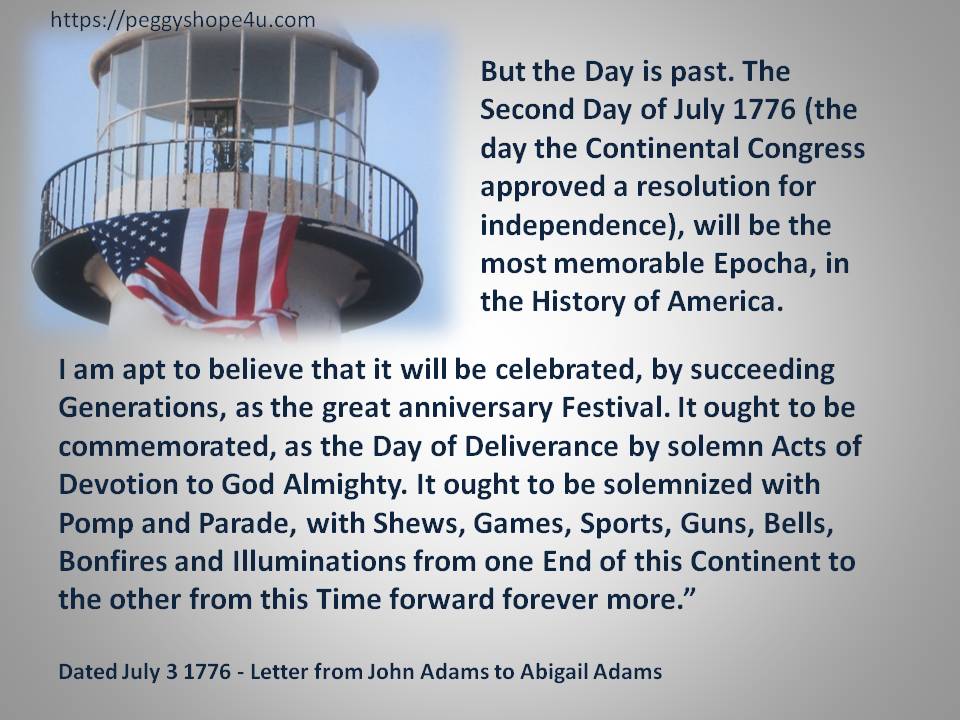 My favorite memory of the July 4th festivities was when the boys were in junior high and we had a foreign exchange student from Mexico. We all attended the Pan-O-Prog Parade in Lakeville, MN, where we lived at the time. The parade was always huge and one of the main events of the year for the community. After watching all the bands and floats for two hours, the parade ended and I began to fold up our chairs to head home.

I reached out and gave our third son a hug. “Ah, Juancho, the thing is, we’re the strongest country in the world. We don’t need to show our strength to anyone. The world already knows how strong America is.”

His eyes rounded, “I understand.”

2 thoughts on “July 4th: Honoring the Patriotism of a Nation”