How Far Can Identity Theft Go?

When I Was You is a terrifying study of the dangers you encounter when victimized by identity theft. It’s even more unbearable when the thief knows you better than you know yourself.

Brienne Dougray has a perfect life. She’s started her own successful business. Also, she has the backing of a fortune left by her grandparents and dedicated friends. That all changed when she was attacked on her way home from work one evening. The injuries are severe, and there are so many things that no longer make sense.

Why have her friends turned their backs on her? Will she ever regain her memories?

The only person who watches out for her is her new tenant, Dr. Niall Emberlin, and even he is adding to her stress and PTSD.

“It never fails to amaze me all the things people do when they think no one’s watching, the things they think they can get away with.” This quote from the book gives us a glimpse into the overwhelming fear that engulfs a victim of identity theft. Typically, this crime involves illegal methods of using the victim’s name and information for financial gain. This case is even more chilling. There is someone else out there who looks like Brienne, dresses like her, and drives the same car. That typically doesn’t happen in a simple case of identity theft. It’s a chilling reminder that something more is going on

The mystery unfolds first through Brienne’s eyes. But eventually, the good doctor shares his vision of what’s happening to Brienne. This change in outlook will make you start looking over your shoulder too. The beginning of the book was a bit slow, but there was a distinct uptick in pace when Niall’s viewpoint added a new dimension.

Reading this book will open your eyes to the dangers that lurk when you don’t keep a close watch on your financial records. This engaging story has a lesson you can’t afford to ignore.

After barely surviving a brutal attack, Brienne Dougray rarely leaves her house. Suffering from debilitating headaches and memory loss, she can rely only on her compassionate new tenant, Dr. Niall Emberlin, a welcome distraction from the discomfiting bubble that has become her existence.

But Brienne’s growing confidence in her new routine is shaken when she stumbles across unsettling evidence that someone else is living as…her. Same name, same car, same hair, and even the same clothes. She’s even friended her family on social media. To find out why Brienne must leave the safety of her home to hunt a familiar stranger. What she discovers is more disturbing than she could have ever imagined. With her fragile mind close to shattering, Brienne is prepared to do anything to reclaim her life if it’s even hers to recover.

Identity Theft Isn’t the Only Topic Minka Kent Writes About 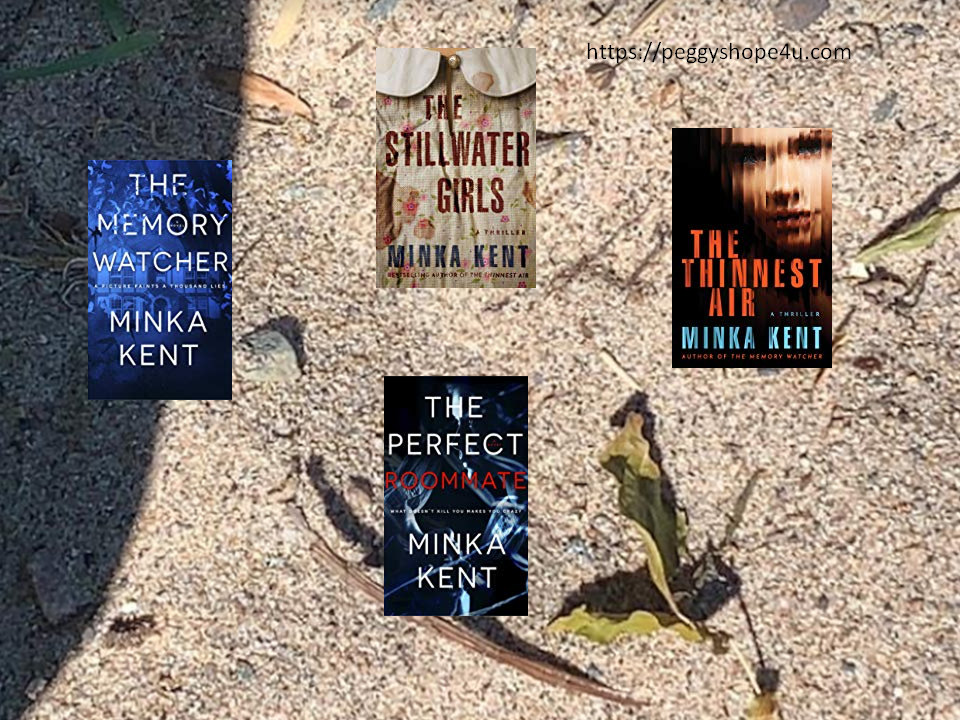 When Autumn Carpenter stumbles upon the social media account of the family who adopted her infant daughter years ago, she finds herself instantly drawn into their picture-perfect existence.

From behind a computer screen, Autumn watches Grace’s every memory, from birthdays to holidays to bedtime snuggles. But what starts as an innocent fascination soon spirals into an addictive obsession that comes to a screeching halt the day the McMullen family closes their Instaface account without so much as a warning.

Frantic and desperate to reconnect with her daughter, Autumn applies for a nanny position with the McMullens, manipulating herself into Grace’s life under false pretenses. And it’s only then that Autumn discovers pictures lie, the perfect family doesn’t exist, and beautiful people? They have the ugliest secrets.

Two sisters raised in fear are about to find out why in a chilling novel of psychological suspense from the author of The Thinnest Air.

Ignorant of civilization and cautioned against its evils, nineteen-year-old Wren and her two sisters, Sage and Evie, were raised in off-the-grid isolation in a primitive cabin in upstate New York. When the youngest grows gravely ill, their mother leaves with the child to get help from a nearby town. And they never return.

To escape, Wren and her sister must break the rule they’ve grown up with: never go beyond the forest.

Past the thicket of dread, they come upon a house on the other side of the pines. This house is where Wren and Sage must confront something more chilling than the unknowable. They’ll discover things hidden from them, what they’re running from, and the secrets that have left them in the dark their entire lives.

A woman’s disappearance exposes a life of secrets in a twisting novel of psychological suspense from the author of The Memory Watcher.

Meredith Price is the luckiest woman alive. Her husband, Andrew, is a charming and successful financial broker. She has two lovely stepchildren and is living in affluence in a mountain resort town. After three years of marriage, Meredith’s life has become predictable. Until the day she disappears.

They discover her car in a grocery store parking lot—purse and phone undisturbed on the passenger seat, keys in the ignition, no sign of struggle, and no evidence of foul play. It’s as if she vanished into thin air.

It’s not like Meredith to abandon her loved ones. And no one in this town would have reason to harm her. When her desperate sister, Greer, arrives, she must face a disturbing question: What if no one knows Meredith at all? For Greer, finding her sister isn’t going to be easy…because where she’s looking is going to get very, very dark.

I know how she takes her tea, how she organizes her closet.

And, I know when she goes to bed each night, what she eats for breakfast, plus the passcode on her phone.

But more important than any of that, I know what she did.

Washington Post bestselling author Minka Kent is a graduate of Iowa State University and the author of The Memory Watcher, The Perfect Roommate, The Thinnest Air, The Stillwater Girls, and When I Was You (2020) about identity theft.