When I saw the above picture on Facebook this morning, posted by my friend Karen Docter, I started laughing. I laughed so hard tears streamed down my cheeks. I remembered the year of the chicken poop project, and everything came back, including the smells.

My display of unbridled emotion spooked the puppy and caused my husband to turn to me in concern. Had I crossed the bridge to insanity?

No one who was there that unbearably cold winter in the ’80s would have questioned my reaction to this picture.

My oldest son was so excited when he came home to announce the upcoming science fair. He fairly flew into the house, brimming in excitement.

“Hey, Mom, we’re going to have a science fair at school! There will be prizes and everything,”

“Sounds like fun,” I desperately stirred the batch of cookies, hoping his excitement would decrease and the horror of the memories of my science fair would flatten like the cookies when I popped them in the oven.

“Can I call Uncle Jay and get him to help me with it?”

My son was so proud of his uncle. Jay had a Ph.D. in microbiology and taught in a real college. Surely, he was vastly more intelligent than the child’s parents.

“Sure, give him a call.” I nodded toward the phone.

The smell of baking chocolate chip cookies filled the house as I listened to him giggling as he talked to his uncle. I’m not sure how long they were on the phone, but I could see my son’s excitement build as the two of them talked.

When he finally hung up the phone, he turned toward the kitchen. His face glowed in excitement and anticipation.

“We need to get some chicken poop.” He turned to head to his room.

“Whoa, young man. You get back here right now. What do you mean we need to get some chicken poop?”

“Uncle Jay said he’d put the instructions and all the stuff I’ll need in a box and mail it tomorrow. I’m going to make methane gas out of chicken poop.”

For the briefest of moments, I nearly laughed. I grew up with that boy. How many times had I told my husband I was going to buy a drum set for one of his kids as a ‘get-even’ maneuver for Christmas? Now, he was going to arm my child with chicken poop and an explosive gas?

I should have immediately said ‘No!’ and made my child call Jay back. What stopped me was the rare excitement I saw on my son’s face about working on a science project.

I watched him hustle down the hallway to share his chicken poop adventure with his brother.

What Do I Do Now?

If there was any word to describe me during the period when my boys were growing up, I believe it would have been “resourceful.”

I knew several farmers, but I have to admit I had no clue who may or may not have chickens in the farmyard. After a few phone calls which elicited hearty laughter, I still hadn’t found a farmer who raised chickens. Friends offered cow manure and goat droppings, but the elusive chicken poop was beyond my reach.

By the time my husband got home from work, I was exhausted from the search.

This blog is not the place to share the expletives my husband used to describe my brother and my intelligence that evening after the boys went to bed. It took forever to calm him down and convince him it might be an idea to create a love of learning the sciences in our son. We agreed to wait until the box and directions arrived from my brother to make a final determination.

Fear of Becoming the ‘Poop’ Lady

As a side-note, this wasn’t my first experience in the community with poop. The summer before, I’d been put in charge of the fund-raising activity for the Lioness Club. I’d recently read an article about a Cow Pie Throwing Contest and presented the idea that our little town could become the “Pie Throwing Capital of Minnesota.”

The other gals thought it was a great idea. Ticket sales went crazy, and before long we had the Mayor and Chief of Police signed up to toss the discus-shaped cow pies at our summer celebration.

It wasn’t difficult to find a pasture where we could gather the dried cow pies, and a group of us set out with pitchforks to collect the product for our contest. We were in the field for a little over an hour. When we got back to the garage where we were going to store them, we discovered one of the gals had been picking up the wet ones. What a mess! We immediately discarded her bags and I found myself going back to the field the next day to gather more dried cow pies. We even made the evening news in Minneapolis with the event.

Everyone involved thought it was the most celebrated and funniest event ever to come to town.

Now, here I was making calls again to gather up more poop.

I could only imagine the whispered comments around town.

True to his word, the Professor’s box arrived a few days later. To say I was relieved when I saw the large glass jars would be an understatement. Somehow having chicken poop in the house in the middle of the winter contained in a glass jar didn’t seem as untenable as I had imagined.

Jay’s directions were complete, including pictures of how to put the connectors and jars together.

A friend called out of the blue and announced her husband had gathered the much-needed chicken poop for us. All I had to do was drive out to their farm and pick it up.

Things were coming together nicely. 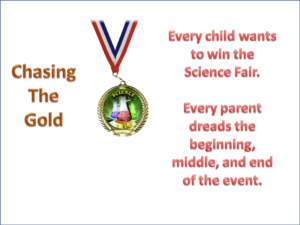 My son’s father rallied after the box arrived. He and T.R. poured over the directions. We erected a card table in the family room in the lower level. Within hours the bottles and connectors were all put together.

We inserted the chicken poop into the bottle. Now, all we had to do was sit back and watch the magic happen.

T.R. was so excited about his project. He and his dad made the trip downstairs each evening to review how the project was going.

I’m not exactly sure how many days passed before I started to smell the stench emanating up from the lower level. It permeated the entire house.

I gagged while fixing dinner.

Then, I gagged in the shower.

Finally, I gagged as I kissed the boys goodnight.

What were those crazy teachers thinking? Didn’t they realize how disruptive the Science Fair was to our household?

My advice: Chicken poop and methane gas do not belong in the house.

I started noticing a long line of kids at the front door each afternoon. Everyone wanted to check out the science project.

In the end, everything worked out perfectly. When T.R. opened the valve and lit the match, the methane gas that had built up inside the glass jar acted like a blow torch.

It couldn’t have been more perfect.

T.R. received an A+ on his science project.

I’ve never been so glad to see a school project delivered to the school in my entire life. The house reeked for days afterward.

I’m thankful we didn’t blow up the house, but I’m still working on the way to get even with my brother!

So, thank you, Susan Messina, for the excellent Science Fair Poster and all the memories it brought back today. I needed a good laugh!