“Why does everyone want to bring me down when I’m feeling so good?” The Lament of the patient with Bipolar Disorder. 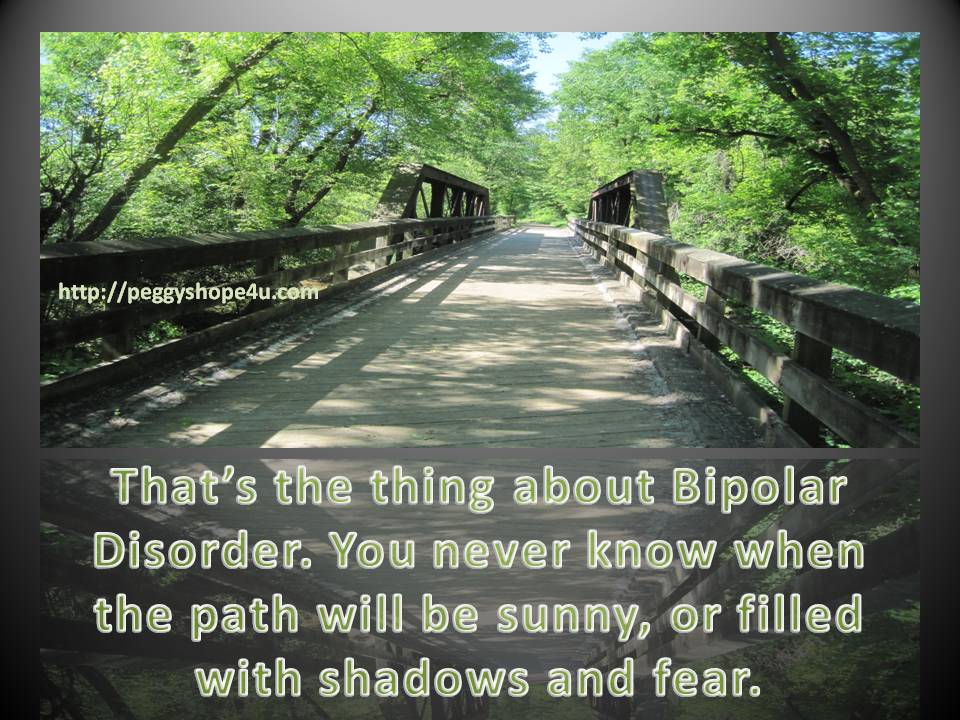 Mother’s words shook me to my core! The doctors diagnosed her Bipolar Disorder when I was in high school. I remember the days, which turned into weeks and months when she was too depressed to get out of bed or eat. Those moments broke my heart. But, when she was feeling good, it was a totally different story. She angrily turned to me one day and spoke the words forever written on my heart:

“Why does everyone want to bring me down when I’m feeling so good?”

I never wanted to see my mom depressed again. My joy in life was seeing her happy and creative but in a ‘normal’ way. I had begun to forget what her normal day even looked like.

Where Does the Bipolar Patient Find Hope?

There is no way to describe the devastation I felt when Mom came up to Minnesota to visit us and became so unmanageable we had to hospitalize her. The boys were little and her erratic behavior in the middle of the night suddenly threatened their safety.

I called the police to dispatch an ambulance. When they arrived, she began to taunt one of the officers. In today’s environment, the results of her actions could have been fatal. Instead, when she lunged for the officer’s gun, he quickly grabbed it and held it tightly in his holster while I tried to wrestle her into a chair.

Let me be very clear, this was not my mother’s normal behavior. I’d have to say that during her lifetime, we had to deal with roughly eight unmanageable manic episodes. She wasn’t my mother at all during those times. This person terrified me and anyone around her when her eyes would glaze over and her actions and words didn’t sound like those of the gentle and loving mother I’d always known.

The Days Leading Up to Her Outrageous Behavior

We’d lived in Minnesota for about four years when I received a call from Mom’s sister. She screamed at me that she couldn’t stand having Mom live in our old hometown any longer. My aunt told me how embarrassing it was to know everyone was talking about my mother. I agreed to invite her up to stay for a few weeks so I could observe her myself.

The first week she was at our house, she played with the children for hours. We laughed and talked about everything under the sun. The only time I objected to her behavior was on a Sunday morning when I came into the kitchen to find my children tied to their chairs with cloth kitchen towels. Her explanation was simple: “They’re all dressed and clean for today’s church services, I didn’t want them to get dirty.”

Okay, you and I wouldn’t tie a three and five-year-old to a chair to keep them clean. I knew that, but I brushed it off as something her generation probably did all the time.

Two weeks later, I was awakened by her laughing and screaming as she ran out of my husband and my bedroom. We both hit the floor running after her to see what in the world was wrong.

My Worst Birthday Ever

Both of us followed her out to the kitchen and found she had one of the boy’s old baby pacifiers boiling in a pan of water on the stove. My eyes were huge as I began to look around my house. It was trashed. Things were scattered everywhere.

She’d found my old wicker baby basket downstairs and had an old doll in it covered up with a towel.

My husband’s wood carving knives were lying on a towel, lined up in front of the television set.

It was about then, my little boys arrived in the dining room. I quickly grabbed them and ushered them down the hall to our bedroom. It was the only room with a lock on the door. I told them to stay in there and not come out for anyone except their father or I. Then, I called nine-one-one and asked for an ambulance.

At that point, Mom stood in the kitchen taunting my husband. I looked at the knives and boiling water when the dispatcher asked if I needed a squad car. There was a hesitation, I stammered that I didn’t know. She asked if I was frightened, and for the first time in my life, I admitted I was terrified of my mother.

It was my birthday.

Several hours later, I arrived at the first Emergency Room they took her to. The staff told me she was so erratic they didn’t even bring her into the ER. I was told the doctor came out and checked her in the ambulance. The decision to transport her to a psychiatric hospital shook me to my very core. They’d put her on an involuntary hold, determined by the doctor who saw her in the ER.

I arrived at the hospital and was escorted through several locked doors to her room.

It was my birthday! My mother lay on a mattress on the floor, her wrists and ankles restrained so she couldn’t move.

Unfortunately, I quickly became nearly as hysterical as my mother. “That’s my mother, you untie her right now!” I yelled.

A nurse escorted me to a private consultation room and asked me to wait for the doctor.

The man who arrived shook my hand and introduced himself. He explained he’d been a trauma doctor during Vietnam. His explanation was meant to make me feel more comfortable in his ability to treat people who weren’t responding normally, I’m sure. How could her current situation be compared to a soldier with PTSD?

I still didn’t get it, and I asked him to release my mother so I could take her home.

An Explanation I Could Understand

The man began to explain bipolar disorder in a voice so gentle I couldn’t stop the tears as they poured down my cheeks.

“I had a patient who was Bipolar. He was a wonderful young man with a family, but there were times when he went off his meds like your mother.”

I looked down at my hands. More ramblings about how my beautiful mother couldn’t control herself wasn’t a conversation I wanted to hear.

He continued. “When he was manic, he drove his car like he drove his body. His wife called me. She was hysterical. He’d gone off his meds again and took the family car. I immediately contacted the authorities, and they set up a roadblock to stop him on the highway and prevent him from hurting anyone else.”

My eyes lifted as he reached forward and took my hand in his.

“Peggy, he hit that roadblock doing ninety-five miles-per-hour. It took weeks to patch him up to the point I could talk to him. When I asked him why he hit the roadblock, his answer seemed simple: “It shouldn’t have been there!” He stopped talking and sat looking at me with eyes so sad, I knew this story broke his heart.

It was like someone turned a light on for me. I could hardly contain myself. For the first time in my life, I finally understood the manic side of bipolar illness. The young man hit the road block because it “shouldn’t have been there.” You and I would have applied the brakes to stop the car.

Suddenly, all the conversations I had with mother made sense to me. When I listened to her explanations of the events my aunt objected to, her responses sounded so logical, I had trouble questioning her behavior.

It wasn’t until I saw her at the pinnacle of a manic episode that I finally understood how very logical she felt her behavior was. Of course, she couldn’t understand why everyone wanted to “bring her down” when she was truly enjoying her life.

Depression is the most horrid thing in the world to experience. You can’t function. Life is all darkness – there is no light. But mania? It gives the bipolar patient a reason to live. They can go for days without sleep or nourishment. They become unstoppable and dangerous to themselves and others. 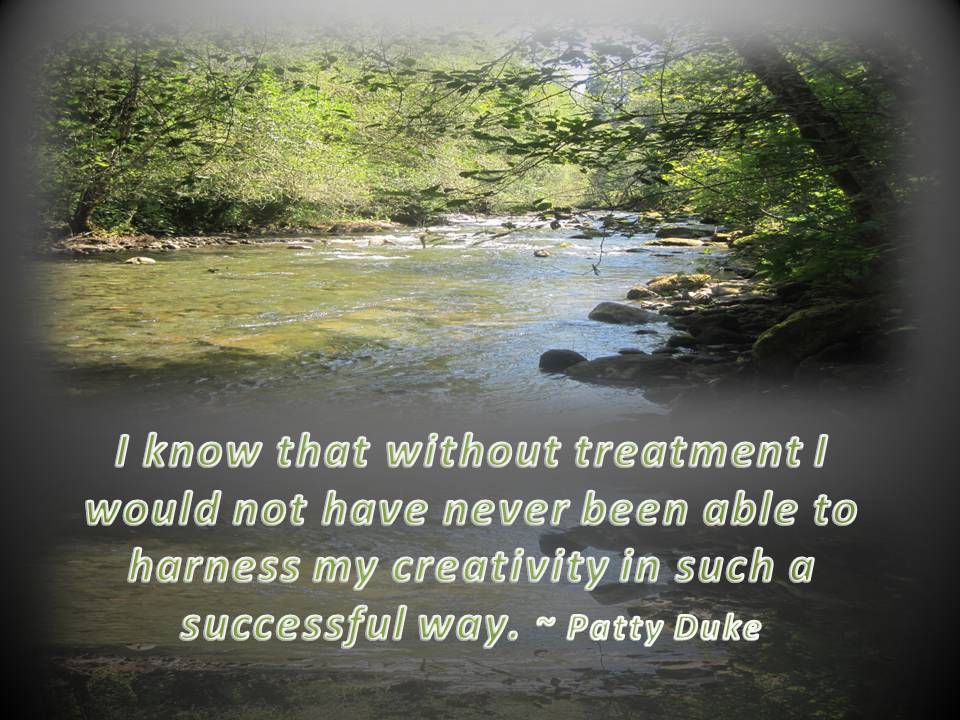 Bipolar Disorder Affects So Many

Singer Demi Lovato was diagnosed when she entered rehab at age 22.

NBC’s journalist Jane Pauley wrote: ‘Sometimes I was raring to go; other times, just hanging on.’

Emmy-winning actress Mariette Hartley fought her bipolar illness and for a long time believed her problem was alcoholism.

Catherine Zeta-Jones has tried to elevate people’s opinion of the disorder by being open about her struggles.

Actress Vivien Leigh was treated with electro-shock treatments because Lithium hadn’t yet been discovered as a solution.

Comedian Russell Brand is Bipolar…Well, of course, he is. I get so tickled when I see him performing because he reminds me of mom with his unparalleled energy when performing.

We can’t overlook Carrie Fisher and her struggles to maintain her relationship with her mother.

Patty Duke is one of my favorite actresses. By going public, she was such a help to my mother.

Winston Churchill is a man we all respected and he, too, suffered from Bipolar Disorder. I don’t like standing near the edge of a platform when an express train is passing through. I like to stand right back and if possible get a pillar between me and the train. I don’t like to stand by the side of a ship and look down into the water. A second’s action would end everything. A few drops of desperation.
– WINSTON CHURCHILL (1874-1965)

What is the Upside of Bipolar Disorder?

I would never give up a day in the life of my mother. She treasured her life and had a huge heart like her father. Whatever the challenge, she rose to it whenever anyone needed help. She arrived first with food when someone was ill or there was a death in the family. Mother adored her family and always made us her first priority.

Some of the greatest minds and talents in our time struggle with Bipolar Disorder. Does that make them less than what you want in a friend, mother, daughter, son, or spouse? One of my closest friends has Bipolar Disorder, and I wouldn’t change one thing about her. She’s a gifted writer and a computer whiz. Her devotion to her family is every bit as deep as my mothers.

Someone told me years ago they never planned on having children because they had a history of Bipolar Disorder in their family and so did their spouse.

That statement has haunted me ever since. How much do you miss by trying to eliminate a disorder that is highly manageable by making this decision? How incredibly talented might a child be who will never be born? This is an illness caused by a chemical imbalance in the brain and there are medications which work very well to control it. I don’t consider it a mental illness. In it’s truest sense, it’s like a vitamin deficiency that needs to be diagnosed in order to treat it properly.

For those of you who do struggle with Bipolar Disorder, please don’t ever give up. Your life is a jewel in a sea of ripples. Everything about you is precious to someone, so when the depression hits, please know there are many of us praying for you, even if we don’t know your name.

2 thoughts on “The “Upside” of Bipolar Disorder”