I know what it’s like to suffer a tragedy when someone drives drunk or on drugs. It happened to me, and my son. This novella documents the torment Brianna feels, what we all would feel when trying to continue life after the loss of a child.

Brianna was driving when the other car slammed into hers. All three of her children were in the car with her, and she was the only one who survived. Can any of us make it through this kind of tragedy and hold our marriage together? Is it possible after the loss of a child to even survive?

How many times did I scream at God in my head? It’s no surprise to me that Brianna questioned her faith. I can’t imagine the pain of the loss of a child, but three at the same time? Again, how can there be a God who would allow such a horrible tragedy to occur?

This novella combines tragedy, hope, and faith into a story that will linger in your heart long after you listen to the story. It’s a perfect audiobook to take to a quiet spot under the shade of your favorite tree so you can watch the butterflies float from flower to flower as you listen. If you like happy endings, you will love this book. But, if you believe in miraculous new beginnings as I do, this book will fill a void you didn’t know existed.

The book takes about an hour of listening time. It’s very much worth it.

Grief for the loss of her children due to a tragic accident causes Brianna to be angry with God. Why was she being punished? Through a series of signs, she is reassured of the love that he has for her.

This feel-good, faith-based story follows Brianna through her grief, anger, doubt and ultimately to her joy.

And yes, after my mother died I wept because I wasn’t able to talk to her at the end of her life. I longed to hear her say, “I love you,” one more time. That day on the deck I sobbed as I tried to voice my frustration that by the time I got there she could no longer speak. And then it happened.

A monarch butterfly flew up and his wing touched my right cheek. It paused and then flew over and his wing touched my left cheek. Again, it stalled in mid-air in front of my face, suddenly flying down and brushing a wing against my hand and then it was gone. I called them “angel kisses” when I blinked my eyelashes against the rosy cheeks of my children when they were little. Like Brianna, the angels appear in the most mysterious ways if we only watch for them.

Ralph Nelson Willett was born and raised in West Michigan where he recently returned after thirty years. He has been married for thirty-six years to a wonderful woman, and together they have three sons and three grandsons.

His writing career began as a hobby, writing short stories that he turned into audiobooks. Several people that listened to the audiobooks encouraged him to write more. Then one summer evening, while walking the Lake Michigan beach with his wife, he picked up a small reddish stone. That small stone was the inspiration for his first novel, The Rose Stone. Ralph explains that inspiration this way: “It was amazing how the story came to be. I can only say that it was God-given. I bent down to pick up the stone and by the time I stood upright again I had the entire story in my head.”

Ralph frequently uses Michigan for many of his faith-based novels. He enjoys bringing readers along for an emotional ride through the lives of his characters, weaving the love of God throughout to bring hope where all hope is lost.

“I try to show how relationships can save lives. It’s the loving touch of one soul to the next that demonstrates the Christian life.” 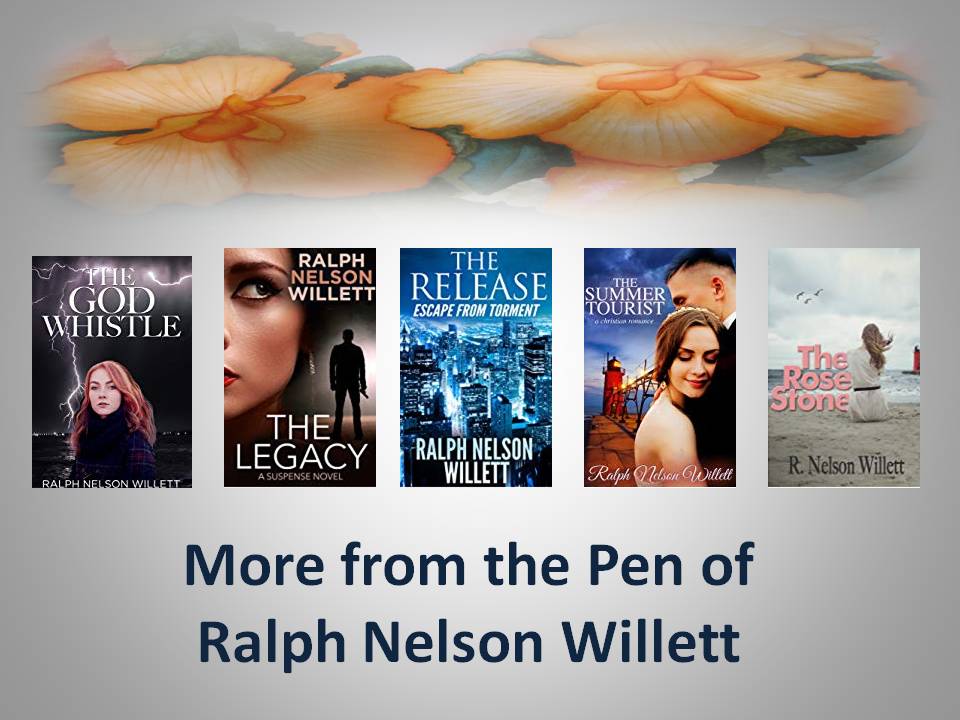 Ralph’s favorite among his books is The God Whistle. It’s a story of misplaced guilt, judgment and condemnation. Through the story, it shows how God can use a tragic event to bring happiness and peace where it was missing before.

“When I began writing The God Whistle, I had no idea it was going to affect people the way it has. Several people have written to tell me that it made them think about their own lives and their relationship with God and others. For a work of fiction, I couldn’t ask for more.”