Patricia Bell is our Guest this First Saturday in December

Patricia Bell is an Arizonian, who has traveled much of the world. Growing up a military brat and joining the Navy herself, at the age of eighteen, has allowed her to see many places and experience the world. She served on Mission trips to Uganda, Africa, which has dramatically changed her perspective on life and living.

She has since settled down and now writes YA and Mystery Novels. She is an Avid reader of Christian fiction of any kind and sometimes dabbles into the unknown world of Stephen King, J.K. Rowling, and John Grisham.

She’s married to the love of her life and has three children who are now grown and facing the world on their own. Years of raising her teenagers have given her plenty of experience in the YA realm. If you read her stories, you may glimpse some of their characteristics.

From House to Home:

Without discussion, Karina is shipped off to a small town away from everyone she’s ever known. And If learning she has an estranged Aunt and Grandmother wasn’t bad enough, she must now contend with an Uncle who is younger than her- and not so nice either.

After overhearing a phone conversation between her aunt and grandmother, Karina suspects that her father, the guy her mother said left them stranded when she was two, could be in this very town. Armed with determination, sharp wit, and her new bestie, Amy, they begin an investigation.

After all the lies her mother told her, Karina is on a quest to uncover the truth. Along the way, she discovers long-held secrets, experiences real friendships, and for the first time in her life realizes what it means to go from house to home.

Patricia Bell, how were you inspired to write “From House to Home?”

To be honest, I was sitting in the emergency room with my daughter when the idea came to me. I don’t remember why she was there, but I had brought my laptop because I knew it would be a while, and it was… I wrote the first five chapters sitting beside my daughter’s hospital bed.

Which character in the book is closest to Patricia Bell’s heart, and why?

Karina is a special friend to me. She has spunk and character with a hint of sarcasm. (okay a lot of sarcasm.)

Which Book was the most challenging of the three, and why?

I would have to admit, it was the second because I had to make a tough decision. I can’t say, or I will ruin the book for you but believe me, it was difficult. 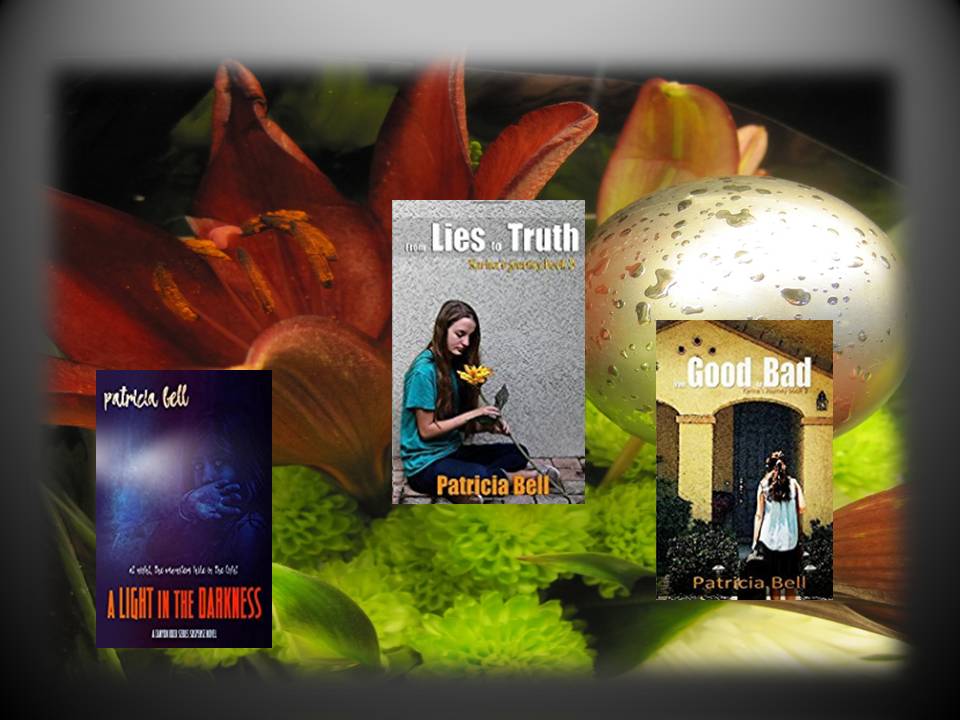 Patricia Bell, you have another book, A Light in the Darkness: A Canyon Rock Series:

Alexis McGregor is an awkward seven-year-old, who doesn’t seem to fit in anywhere. At school, the kids call her “Fat-Lexis,” and at home, her older brother Jake blames her for the break-up of his parents.

When Alexis and her only friend Sierra get into an argument, Alexis finds herself alone, on the streets of her community, after midnight. She’s helpless, frightened and feeling hopeless. That is, until a nice guy, one she recognizes from the neighborhood, happens by and offers her a ride. Tired, and scared, Alexis accepts.

When her family finds out she’s missing, hearts begin to change. Secrets are revealed. Wounds healed. But time is running out for Alexis.
Join Chief Erika Granger as she solves the mysterious abduction, in the first story of A Canyon Rock series. A Light in The Darkness.

What did you have to do to capture the essence of a terrified child?

For the last sixteen years, I’ve been a childcare provider. I am surrounded by children constantly. And it doesn’t take much to terrify a child. But to be honest, Alexis (My main character) is the very essence of me. She is an awkward, overweight, bullied, insecure young girl who has absolutely no self-esteem. Though the story is about abduction, it is also about the self-worth of a young girl and how she learned to believe in herself.

Are there more mysteries to come?

Yes! As a matter of fact, An Eye for An Eye, the second book in The Canyon Rock Suspense Series will be out by the end of the year. I also have another book out called The Surrogate. It’s about a young adult who is offered $100,000 to carry a child for a wealthy couple. Emily quickly runs into a moral dilemma that will change her life forever. And there is a second book coming out to The Surrogate in early 2018.

You went on mission trips to Uganda, Africa. What was the most heart-wrenching experience you had there?

Uganda is a beautiful country. The people were kind, and instead of blessing them, my husband and I went home with a new look on life. Our work was done in an orphan ministry called Watoto. Many children are orphaned there because of wars and disease.  The stories of the child soldiers and what they went through was heart-wrenching.

I have to ask this one because I’ve always been in love with the concept of being in the Navy. Where did you serve?

I served in the Navy for thirteen years and traveled the world. I was on two ships. The USS McKee and the USS Coronado. (both based out of San Diego). I spent two years on the island of Guam, as well as traveled to Japan, Korea, Mexico, Canada, and Hawaii.

Growing up in a military family has more challenges than I can even imagine. What was the hardest thing for you?

To be honest, my father retired when I was five, so I didn’t get the worst of it. Being the youngest of seven children, my parents were older by the time I came along. But the Navy heritage was instilled in me none-the-less.

What did you enjoy most about being in the service of the United States of America?

The most exciting part was the travel, of course. But the best part was what it taught me. Besides learning a trade, the military trained me to be responsible, accountable, respectful, punctual and accountable.

(I love those attributes, Patricia. They are universal among the incredible men and women who serve this country so well!)

Thank you for joining us here today, Patricia! May you and your readers enjoy a beautiful holiday season!

Thank you so much for having me, and I’d like to wish you all a most wonderful Christmas and New Year!

You can Find Patricia Here: