I remember Grandma telling me her story of the beginning of World War II. She and grandpa were running the restaurant when someone raced in to announce that the Japanese had bombed Pearl Harbor. They had a rather “unfancy” radio upstairs in their apartment and brought it down so everyone could hear the announcer. Her eyes became as large as walnuts as she told us how silent everyone was. Customers listened for a few minutes before rushing home to their families. As we remember so many relatives who died in that war, we honor everyone who served on this Pearl Harbor Day.

We flew over the USS Arizona Memorial when we landed in Honolulu a decade ago. Aboard our plane were a handful of Japanese citizens. As the plane flew over the Memorial, this group pointed. One of the men said something in a language I’ve never known, and they all laughed. For a split second, I believe I felt what every American must have felt on Pearl Harbor Day 1941.

Since I’m an author, I thought you might enjoy an excerpt from Background Music, the book my uncle F.A. Gossett, Jr. wrote to immortalize his lifelong love affair with his wife Deloris. This excerpt describes his time in Hawaii:

We landed in Honolulu, Hawaii on a Saturday and were trucked to a city park where tents had been set up for our arrival. The reason that we were placed in a city park was that they did not want us on a regular Army base. The work that our company was trained to do was of a very secret nature and we were kept separate from all Army installations. That work was to intercept Japanese radio, decode the messages, and translate them. Within minutes, that message was in military hands in Washington, D.C. It was very demanding as we were working with ultra-secret documents.

Because of the very nature of our work, our shift was only eight hours a day, leaving us with lots of time on our hands. The Army encouraged us to take outside civilian jobs in an essential industry. Because my eight hours with the army were at night, I was free all day.

Teaching the Kids of Hawaii

Someone said that they were very short of teachers due to the war so I took a job teaching at Kalakawa Intermediate School. The first semester I taught English and social studies and the second semester I had all math classes. It was a great experience. The first day that I showed up at my school and reported to the principal, he gave me all the books and records that I would need and a very large paddle. I told him that I didn’t think that I would need a paddle, and he informed me that it was not to discipline with but as self-protection. That was another reason that they were short of teachers.

One lady that was teaching at the same school had a husband in the “Bataan Death March” in the Philippines and she did not know if he was living or dead. Each morning, she would go to her mailbox at the school and look for the letter that never came. From her home, she would pass right by the park where we were camped each day on her way to school, so she would pick me up and save me the cost of a bus ride. In turn, I supplied her with Hershey candy bars from the PX. Candy was almost impossible to get during the war. I left the teaching job before I learned if she ever heard from her husband. I like to think he was able to return after the war.

The principal sent a memo to my classroom asking that we quiz each of our students as to their native heritage. Our school board was interested in finding out how much of a melting pot our school was. I gave examples of how if your mother was Chinese and your father was Japanese, then you were half Chinese and half Japanese. After a very lengthy explanation, I asked one of my slowest students to give me his parentage, knowing that if he understood, everyone would. His example was: his mother was Chinese and his father was a staff sergeant, therefore he was half Chinese and half staff sergeant.

At the end of the school year, I was so used to working eight hours for the Army and six hours for the school that I was all charged up. I only had time on my hands. So, I went to the bank downtown and got a job in the auditing department. The bank was then called “Bishop’s National Bank.” After the war, it became the “Bank of Hawaii.” What I remember most about that job was that they had their own cafeteria on the seventh floor and their Japanese cook made the greatest cherry pie in the world. Every cherry was candied and I’ve never tasted anything like it since. (Uncle FA loved to eat!)

While working at the bank, my desk was beside a young Chinese man that used an abacus instead of an adding machine. I was fascinated with how fast he could shuffle those beads and come up with the right answer. For the fun of it, I challenged him to a race with me on a conventional adding machine. He had the right answer before I could get started. He tried to teach me the workings of the abacus, but my fingers just could not catch on.

A buddy of mine, by the name of Smitty, was a night cook with the company. He was an older fellow and had a family back home that he needed to send money to. His idea was to start a laundry, as the Army laundry made quite a mess of the uniforms that they cleaned. He saw it as a chance to make a little extra money and asked me to be his partner. The idea sounded good.

He would make the starch in the mess hall at night, and between my jobs, I would wash and starch the uniforms and hang them out to dry. There were no washing machines, you understand. The washing was done on a board by hand. He then would get up from his morning sleep after cooking all day and iron them. We did hats, trousers, and shirts, and we did very well. All the guys were glad to have nicely cleaned, pressed, and starched uniforms to wear on a pass.

The starch we were using was not the kind you normally would use for clothes, but rather it was cooking starch from the mess hall. Now if you let that starch set a few days it gets sour. While it will still do a nice job of making the uniforms look crisp, it will have the worst smell you can imagine when it is put on a warm body. There was a public theatre just a few blocks from our unit. One Saturday night Smitty and I went to the show. The place was filled with men from our company. As the evening wore on, (in this theatre without air conditioning) you could smell that rancid starch all over the place. We went out of the laundry business that night. You might say, “the laundry business was stinking and we were washed up.”

One day as we returned to our unit for lunch, Jerry and I stopped to pick up our mail. As I was reading a letter from home I glanced up, and sitting there across from me was my best buddy Jerry, with big tears rolling down his face. He had received a “dear john letter.” There were many of them during the war, and I am sure in all the wars before and since.

Jerry and I went daily to our office which was a few miles from the park where we lived. The building in which we worked was surrounded by high fences and MP guards were at all entrances. We were the only ones from our company that worked at this office and as a result, we were on what was called “detached service.” This was both good and bad. The good being we never had KP (kitchen police) or guard duty. In this company everyone but commissioned officers pulled both duties. The bad was we were never able to get a higher ranking with the company. As a result, I stayed a private until the war ended and I returned home. 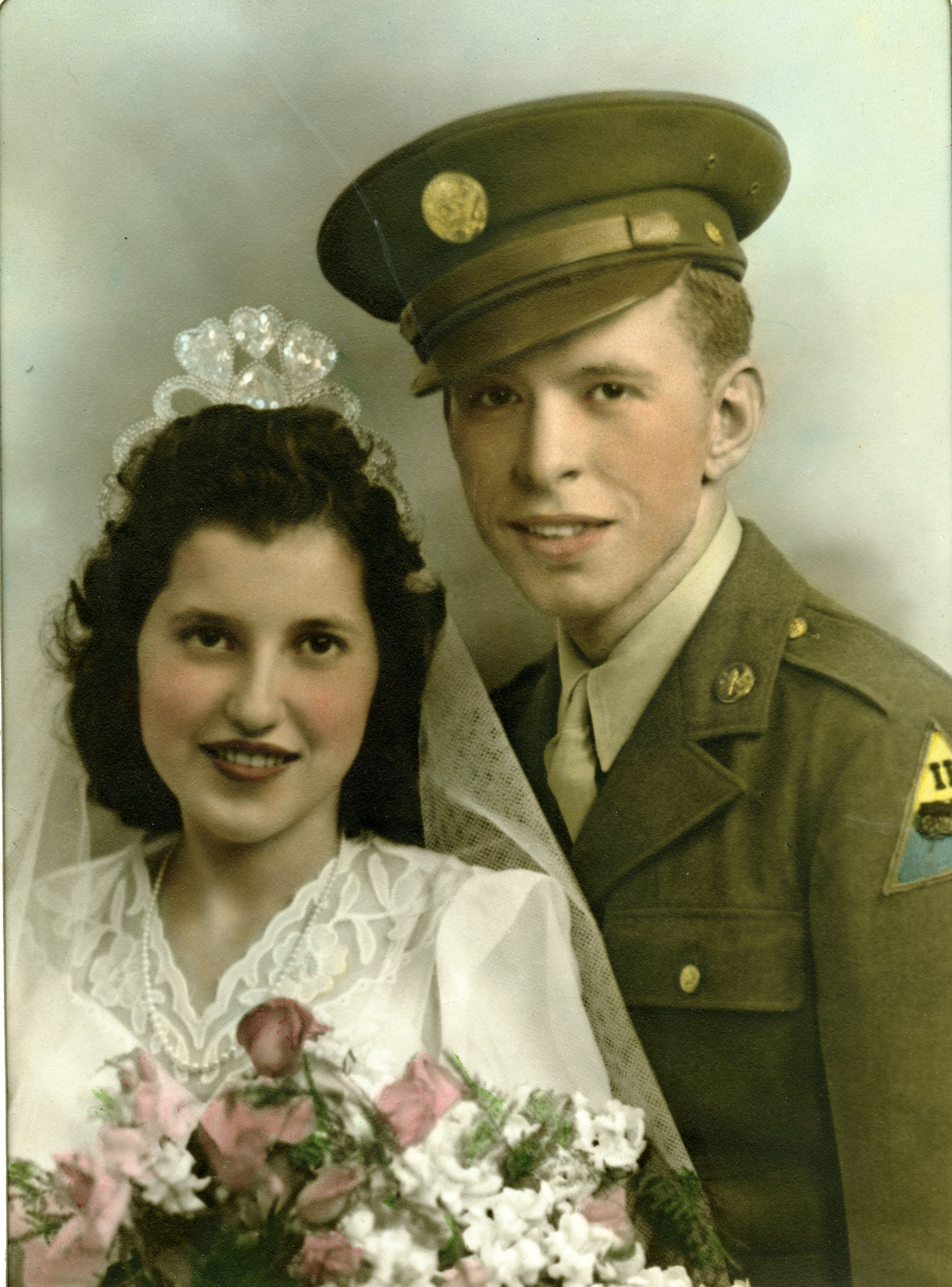 All this time, Dolores and I were exchanging letters daily. Sometimes the mail would pile up. After missing a few days I would receive a whole heap of letters. When there were pictures in with the letters, that was the best letter ever. Like everything else, film was hard to get. So when you received or sent pictures it was very special.

Jerry had a little camera and we took pictures whenever we could get the film. The company had a dark room that we used and could enlarge and tint our pictures before sending them home. There was no color film back then. Tinting was the only way that you could get a picture to look real. Besides, it was something to do and we both became very good at it.

During the twenty-two months, I was in Hawaii, Dolores was going back and forth between her home in Columbus and my folks’ place in Fremont, NE. Our baby was much in demand at both grandparents. Dolores was so warmly welcomed at my home that she felt like a daughter. The love between my wife and parents grew into a very wonderful thing. They saw to it that there was nothing she could want for, except the return of her husband from the war. Over the period of twenty-two months I spent in Hawaii, I sent home twenty-seven hundred dollars. Dolores banked the money and we used to help buy our first business.

One Saturday afternoon in August, I was in a theatre in downtown Honolulu enjoying a movie when they put a slide on the screen that Japan had surrendered and the war was over. The entire theatre rose as one and headed out into the street. Never have I seen so much celebrating. Soldiers, sailors, and marines were everywhere screaming and throwing their hats into the air. It was really over, but we all knew that according to our papers, we were to serve as much as six more months. We were all sworn in for the duration plus six months. At least, we now had a date to look forward to.

We bid farewell to Uncle FA this year. He was an honorable man who placed his wife above all other responsibilities in his life. He didn’t see the horrendous battles that the other men in my life witnessed in WWII, but I feel better knowing his intelligence work helped end the war and bring our boys home. F.A. brought laughter and joy everywhere he went.