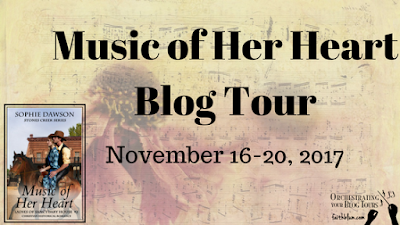 Sophie Dawson is back with a new book! Just published on November 16th! It’s all about music and a marriage forced on them by circumstances. Can Red and Gema make things work?

Red Dickerson is shocked to see a young woman running
through the woods in the freezing rain. He’d gone to the far end of Hawk’s Wing
Ranch to think after his engagement was broken by the woman he planned to
marry. Recognizing her as Gema Volkovichna, one of the women from Sanctuary
House, he spurs his horse to go after her. Finding she’s escaped after being
kidnapped by the infamous King Gang, he vows to keep her safe.

Gema Volkovichna is one of the newest women to come to
Sanctuary House in Stones Creek, Colorado. She came to find work and possibly a
husband. When a spring blizzard forces them to spend three days alone in a line
shack, there’s only one conclusion. She and Red must marry to salvage her
reputation.
Can Gema and Red learn to be husband and wife? Will love
grow from this forced marriage? Will the King Gang return to reclaim what they
lost? Can Red and Gema learn to dance together to the MUSIC of HER HEART?
Buy on Amazon here: https://www.amazon.comdp/B076MBLXMJ

Sophie Dawson has made up stories in her head all her life.
It wasn’t until 2011 that she began writing typing them out. 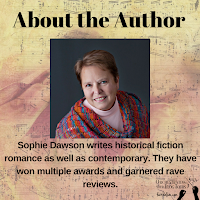 Her first books were all historical fiction romance. In addition, they’ve
won multiple awards and garnered rave reviews. Now, Sophie has branched out
into contemporary romance though she plans to continue writing historical and
hopes to add more books in her popular Cottonwood and Stones Creek series.
Sophie lives with her husband and very old cat on a farm in
western Illinois. She’s an avid seamstress and was a professional quilter for a
several years before the writing bug bit. She’s just thankful it’s not fatal.
Sophie’s Amazon Author Page

What was your inspiration for this newest release?

The Stones Creek Ladies of Sanctuary House is a spinoff series from my Stones Creek. Also, a lot of readers like mail-order bride books. This series is a different take on that trope. Rather than write the same old thing, I have my Ladies be from rather challenging backgrounds. They’ve all come West from Nugget Nate’s Sanctuary Place to start new lives and hopefully find husbands in women starved Stones Creek. They’ve been rather successful at this.

Several of the women found their loves in Chloe’s Sanctuary. Laura found hers in Laundry Lady’s Love. The hero for Music of Her Heart, Red Dickerson, was the loser of the Lady’s affections in the earlier book. Red wasn’t a bad guy, just a typical man who thought he knew everything. I liked him enough that the young Russian immigrant, Gema, became his bride because they had to ‘do the right thing’ after spending three nights alone in a line shack.

I’ve got several more books planned, but they won’t be released until sometime in 2018. That gives everyone a chance to get caught up in all the Stones Creek books.

If you had to pick one character in the book most like you, who would it be and what primary characteristic came from you?

I’d have to say, Leah, who doesn’t appear but in one short scene in Music. Her story is told in the first book of the series, Leah’s Peace. I’m not that much like her in many ways but I love to sew and she is a seamstress. If I’d lived back in that time, that would have been my profession.

In Music, Gema’s my favorite. I’m not anything like her. She’s tall and thin. I’m the opposite. Plus she’s young. I’m not. What I like about her is she forges through the challenges she’s faced, being orphaned at age 16, in a foreign country where she doesn’t know the language, moving West with another woman who’s suffered tragic loss. She’s unsure of herself but keep plugging away.

What about this book will grab the hearts of your readers?

The woman and children from the King Gang. They’ll tug your heartstrings. Especially Mae, I think. Tadpole is going to get into some scrapes in the upcoming books I think. He’s a bit of a scamp. These women and children have suffered greatly and most readers will feel for them. I’m not telling any more about them. I’ve not mentioned them in any promos or interviews, and they don’t appear in any snippets. You’ll have to read the book to find out. 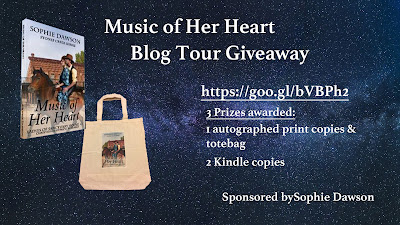 In honor of the Music of Her Heart Blog Tour, Sophie is
giving away one print copy of Music of
Her Heart along with an autographed tote bag. Also, two Kindle copies will
be awarded. Winners will be notified by email – keep your eyes open for an
email from Sophie Dawson. You can enter here: http://sophiesgiveaways.com/giveaways/music-of-her-heart-giveaway/

You can learn more about Sophie Dawson here: