Are We a Nation of Lost Hope? Is There No Room in the Inn?

Lost hope is a state of mind a child can’t begin to comprehend. At least, not until something tragic rips the joy from their life and leaves them in turmoil.

One of my earliest memories is of a man I don’t remember. What I do remember is how white everything was that day. I remember how white the sheets on the bed were. His handlebar mustache and messy hair were white. The walls in the room were white. It all terrified me. I must have been quite small, probably two or three. That room is one of two early memories. Both of them caused me to feel terror.

I struggled when Mom picked me up and leaned me down over the man, telling me to kiss his cheek. Tears ran down my cheeks, and my feet swung around in desperation. I wanted to escape from the fear of the whiteness. It was a place of lost hope for the wrinkled old man. I tried to run away.

Eventually, I would learn that hope filled this man’s heart when he left Ireland as a child with his parents. This old man was the boy who arrived on the shores of America an orphan.

He wasn’t the only orphan who arrived from Ireland. The attitude toward the Irish in New York was less than welcoming back then. My grandmother descended from the Irish. It was definitely a struggle for them in America.

My grandfather’s family immigrated from Great Britain. Americans welcomed the Brits with open arms, unlike the welcome the Irish received.

There Is No Lost Hope When We Follow His Word

What I also remember, is the Bible verse above. Mom drilled this one into me. I knew in the depths of my soul that to degrade or hurt someone else was a sin. It didn’t matter if they were destitute or wealthy. What I did to harm another human being was transferred to Jesus. That lesson has never escaped my conscious or subconscious mind. I believe in its truth today as I did as a child.

I remember the times Mom used the green stamps she collected from Kent Feeds to purchase Christmas gifts. These weren’t gifts for us. They were gifts for farm families who had a rough year. Many of the recipients were Catholic families. These were some of the kids at school who tormented me that I would go to Hell because I was a Protestant.

I learned the lessons of sharing hope from my mother. She placed no restrictions on who would receive her generosity. She sent boxes of clothes to the children of Appalachia every Christmas. I watched as she spent the year gathering clothes and begging for discards from everyone she knew.

I remember like it was yesterday, the night we received the call from the young father begging us to take in his family. He and his wife had three young children, and he didn’t want to raise them somewhere he believed was filled with sin. He was terrified of the world of drugs and alcohol. Truly, he believed Sin City would swallow these children he loved with all his heart.

By then, I had two young sons. To take in a family of five was crazy. We were barely getting by as it was.

I thought about Mom and immediately responded that we would be happy to take them in.

It would be a lie to tell you it was easy. I had to make food for four people stretch enough to feed nine.

There were times I had to cringe and walk away from parenting skills I didn’t agree with when the young father corrected the children. There were more times when I stepped in and showed him how to handle his children’s misbehavior than those when I turned away. But, it wasn’t enough.

The young father’s parents may not have planned for him, but my God doesn’t make mistakes. I held him in my arms as he sobbed that night. He was only eight-years-old.

The story of this little family continues. The young boy and two little girls are grown and have their own families now. We helped save them from the temptations of the big city. Their father wasn’t as lucky.

We overlook how the trauma of childhood never releases its hold on young minds and hearts.

Our young father wasn’t able to overcome the drugs and alcohol that were so readily available to him before he moved in with us. How many nights when his wife was at work did I tiptoe in to change the baby’s diapers and give him a bottle while his father was passed out on the couch?

The young parents eventually saved enough money to make a downpayment on a home and move out. They should have had a wonderful life.

But, this world can be cruel. No matter how much of a break we gave the young father to start his life again, he was still that little boy who would always believe he was a ‘mistake.’

No matter how many times I demanded he stop drinking, I still found bottles hidden in my home.

How many children coming across our borders now believe they don’t matter to Americans or their parents? Are they any different from the young father who learned early that his life didn’t matter?

Lost Hope Prevails When There Is No Room in the Inn

I read a young immigrant mother’s story yesterday. Officials took her tiny son from her at the border.

This young mother has no idea where the Americans kept her 14-month-old son all those months.

What she does know, is that the child had lice when they finally returned him to her.

The little boy was a shadow of the son his mother brought to America. The weight he’d lost was frightening.

What made the story so heartbreaking for me is the fact that the child wouldn’t stop crying when finally returned to his mother.

How many nights did I cry myself asleep as a child? Who are these people who don’t flinch at the pain they inflict on a child?

Make Room in the Inn

I am a mother who would fight like a lioness to protect my sons. Does that make me an animal?

My roots were not of America. Does this make me an animal?

We have lost sight of the ideals and human dignity of our forefathers.

Many of you may believe this is a political statement.

That is the furthest thing from my thoughts today.

I weep for myself and for all the children who have been traumatized.

A wealthy white man was able to destroy my childhood. Did anyone, anyone at all, know what was happening to me?

Why didn’t someone come forward to protect me?

How can anyone stand by and allow an innocent child to suffer damage a lifetime can’t correct?

Are there more people who just don’t care about innocent children than those who do.

Otherwise, how can we continue to allow the abuse of innocent children?

I don’t believe God differentiates in color or creed when he admonishes us to protect those who can’t defend themselves.

I haven’t lost hope. Have you? 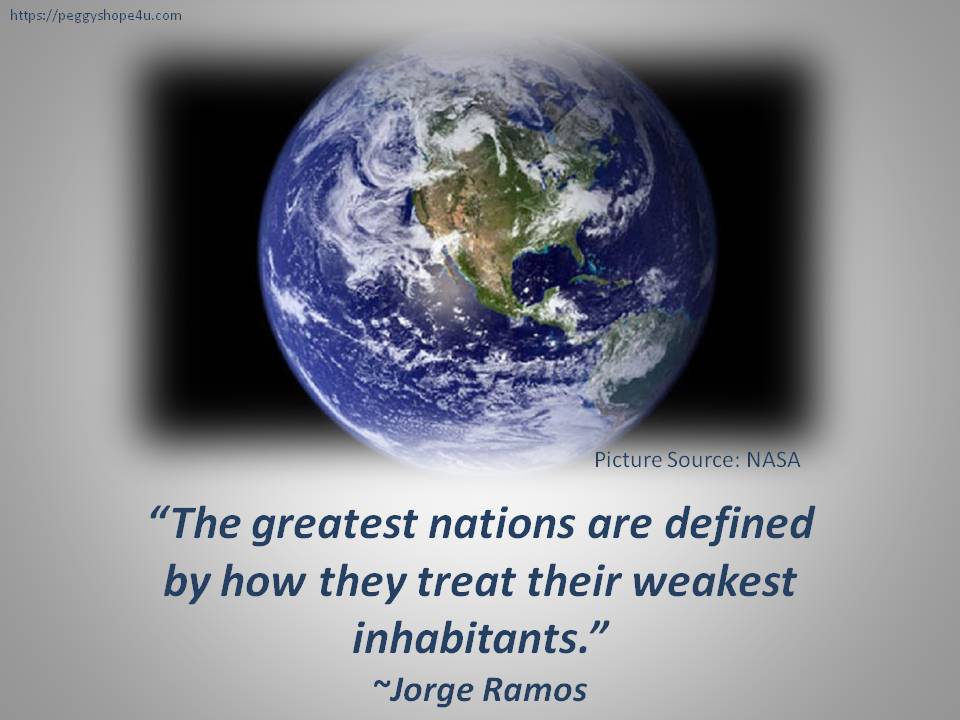 Here’s an article from the Miami Herald regarding children’s efforts to deliver letters to immigrant children being held in detention. Click Here