Can We Protect the Stories? Create a Journal of Lasting Memories

I grew up in a family of story tellers. From Grandma and Grandpa Burton to Uncle F.A., the stories were plentiful and told over the dinner table. I miss those days but try to share as many stories as possible with my children. The lasting memories of the stories told will stay with me for a lifetime.

My challenge was to make sure I was able to protect the stories I’d already heard and those not shared.

I decided to interview my mother. There were tons of questions I wrote out, but we ran out of time. She answered many of them, but there were more.

So, today I want to share some of those questions. Hopefully, it will give you some ideas so you can create your personal memory journal.

What did you enjoy doing as a child?

I enjoyed playing with my dolls and cutting out paper dolls. It was fun to play school with my sister, but I was always the teacher.

I loved eating watermelon. Dad always brought them home from the store where he worked.

Riding my bike was a favorite pastime, but I also loved making quilts with my Grandmother Kennedy. She lived with us. I made the most beautiful flower garden quilt that I used on my two kids, but I threw it away eventually when it was threadbare.

When I was little, I loved to have lemonade parties. I played the piano and the violin. There wasn’t a boring moment in the day.

I loved to play house in the summer kitchen with all the beautiful things Auntie Gossett gave us. (She was a school teacher at that time.) I also liked to work in the little garden Dad helped me tend.

How did you get your name?

My parents named me after my two grandmothers: Martha Newton and Virginia Belle. My nicknames were Ginny, Gin, and Ginya. Jay’s kids always called me Gamma, and Peg’s kids called me Grandma Ginny.

My bedroom in Higbee, Missouri was in the back of the house. If you looked out the window, you could see the garage and the garden. On the west of the house was a miniature golf course.

We had white braided bedspreads, but there were no curtains on the window. Of course, we also had quilts.

We kept all of our toys in the summer kitchen. It was a place where you stored things. So, we had it fixed up like a room. My sister had the prettiest thing. It was a small dresser from Auntie that even had real glass.

That was the place where Mom told us to be Christians first and ladies second. Those were the important lessons she taught us as she cooked in the summer kitchen.

Did you ever do something goofy?

I cracked an egg on my husband’s head when I washed his hair to make his hair shiny. My friend told me it worked well to do an egg shampoo. I loved his wavy hair and thought I could make it even better and bright. Everything got worse when I tried to put hot water on it to wash it out. It took about 20 minutes to get all the cooked egg out of his hair. He was on his way to a meeting in Des Moines and wanted to look especially good. We used hot water, vinegar, and soap to get it all out. It was a mess! He wasn’t happy with me.

What were some of your routines during the week?

Every Sunday we went to church. When we came back home, we got in the car to take tours. I liked going to Hannibal, Missouri best. It was where I got to see the river and Mark Twain’s. The best attraction, though, was Grandma’s Basket Dinner!

Grandma and Grandpa Burton lived fifteen miles away. We went to see them once a month. The roads were mud, so we had to watch the weather. Grandpa so missed them when we moved to Iowa!

On holidays and birthdays, we had big dinners. During the week, we didn’t have huge meals because the folks were working. That’s why we went out on Sundays. (Note, that was a tradition Mother brought to our family. She and Dad worked Monday through Saturday. So, on Sunday we went to church and then drove all over the state of Iowa to some fabulous restaurants for Sunday dinner.

Since we were talking about food, I asked her what her favorite foods were: Fried chicken, potato salad, sliced tomatoes, and chocolate cream pie with meringue.

Where did Grandpa Burton work?

He worked in the meat market at Burton Grocery and Market in Higbee, Missouri. Then we moved to Salisbury, MO and he and Mother managed the Temple Steven’s Grocery. They always said that was the best job they ever had.

When we moved to Washington, Iowa, we bought Uncle Charlie’s place, called “The Kennedy Inn.” We changed the name to “The Burton Inn.” To keep the business running, they put everything they had in it. They lost all their savings. Dad became ill and went down in bed, losing all his teeth. Back then, meals were twenty-five cents and a piece of pie cost five cents. They couldn’t make a go of it. The Great Depression hit, and they were losing money. Mom found a (secret) recipe for fly spray, and she drove around the country selling it in quart jars to the farmers in Dad’s Model-T Ford. It put food on our table.

With the failure of The Burton Inn, the folks moved to Keota, Iowa to manage Oetjen’s Market. Oetjen’s liked the way Dad cut meat. He worked there for awhile and then got a better job at Leinen’s Market before finally going to Ottumwa, IA to work as a government meat inspector for Morrell Meat Packing after Pearl Harbor. He finally made a decent wage and stayed there until he retired.

Mother stayed home until we moved to Salisbury and then she was forced to go to work and help run the store. That’s when Grandma and Grandpa Kennedy came to live with us.

Can you describe your house where you grew up?

The home was very different in Higbee. There weren’t radios or televisions yet. We had pink linoleum on the floor. Mom had a rocking chair. There were two straight chairs and a little table. We didn’t have a sofa until we moved to Washington. We played games, like Rook on the table.

Everyone had a chair, but it was very barren. We didn’t have much until we moved to Salisbury. On election night, Mom would make popcorn, and then the neighbors would come in and listen to our little radio. The folks called it a crystal set.

We used Mrs. Alec Miller’s furniture when we moved to Washington, IA. She was the first Secretary of State, and we even had a canopy bed. We were so excited to have such a fancy bed. It was much different from the folding bed we had in Salisbury.

The restaurant was downstairs, and Mom and Dad worked very long hours. We girls were on our own. When we were really young, Mom would come up and help us say “Now I lay me down to sleep…”

There was a water pipe we were supposed to pound on if we needed something while Mom and Dad were working in the restaurant. Mom and Dad took turns tucking us into bed. 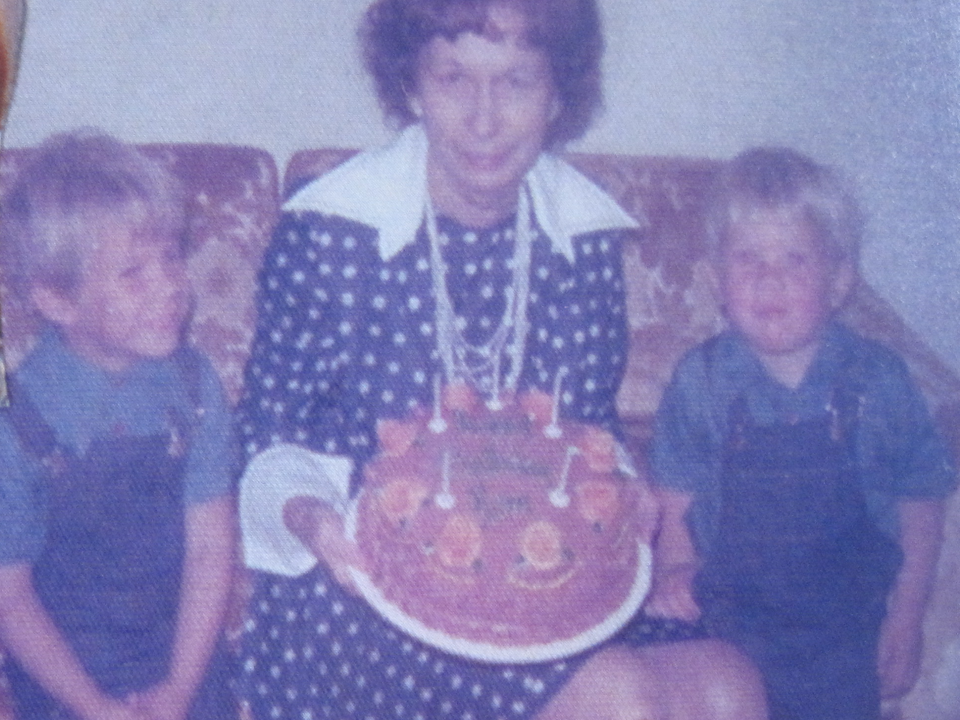 Grandma and Grandpa Burton had a two-story log cabin. They lived in that until 1916. Then, Grandpa built a new house on the farm. It was very nice and had a lot of things others didn’t, like a leather sofa and chair. The buffet had a mirror and long matching table. There was also a library table in the living room. Grandma had a pie safe in the kitchen and a special room off the kitchen for baking with a door that separated it from the kitchen.

Grandma and Grandpa Kennedy lived in Armstrong, MO. Grandpa lost everything when the cattle prices went down, and they were forced to move in with us. My grandma had an embroidery piece above her door when I went there to visit. I always saw it (The Sampler) and wondered what it meant. When I was older and knew what it meant, I felt it was an excellent lesson to live a good life. (And here, I’m kicking myself because I didn’t ask her to repeat the words on the Sampler!)

Did you have a favorite book when you were little?

Someone got me a book of Bible stories when I was a child for my birthday. I loved the book so much that I bought the same book for my kids: Hurlbert’s Bible Stories.

I suppose we were so poor that we didn’t have any other books, except for the Bible and Mom read to us from that.

As I got older, I kept reading that book of Bible stories until all the gold on the front cover was gone, and the book was threadbare.

What is your favorite Bible verse?

John 3:16 has always been my favorite and my strength in the toughest times of life. I have always shared this with my children.

I began asking Mom one question each day when I called her. She was in a nursing home in Minnesota when she died, and we’d already moved to Wisconsin. I loved those conversations and the journal I kept with her stories.

There are many more questions, but my goal was to give you the idea of how to make your journal. You don’t have to be an author to capture the stories your family needs to preserve.

Let me know in the comments below if you’d like to see more of the questions and answers. It was truly a labor of love, and I’m so thankful to have these memories now that she’s gone.