Despair: When All Hope Is Lost

A true short story from the pen of Peggy M McAloon

My body floats upward through the black void towards the light. All hope is lost. I struggle to determine where I am in the black liquid that envelops my body.

Pain! A pain more intense than anything I have ever experienced. I try to fight the ascent but continue to move toward the intense pulsating light beyond my eyelids. I struggle to escape, but there is no control over my body. I float closer to the white light and my head nearly explodes in agony.

Voices! Who are the people talking? They talk about a body in the fetal position and the need to tie arms and legs down. I hear them call each other by name.

I am floating higher and the light becomes even more brilliant. The light blasts through my closed eyelids and explodes deep inside my head. The intensity of the pain reaches a climax beyond my comprehension. I try to scream at the voices to turn the light off, but my mouth doesn’t respond.

I look down at the fathomless black hole below me and dive quickly back down to that place where I was safe only minutes ago. The horror ends.

One Life Ends – Another Begins

This is what I remember of the time I was in a coma. I floated toward the light many times, but the pain forced me back into the depths of minimal human existence. When the brain swells as a result of an injury, the body responds by providing a protective cocoon-like environment. Life is put on hold as the healing begins and swelling subsides. Otherwise, you’d go completely insane from the pain.

We had taken our little boys on an outing and were heading home when the truck crossed the center line. I have heard people discuss situations like this as “happening in slow motion,” and that was my reaction. I was in the passenger seat as I watched the truck moving directly at us. I twisted around in the seat, pushing my son’s faces into the backseat cushions. Back in the ’70s, there were no safety seats for toddlers. In that slow-motion moment, I visualized the boys flying through the windshield.

My body was twisted on impact and my head smashed into the windshield. 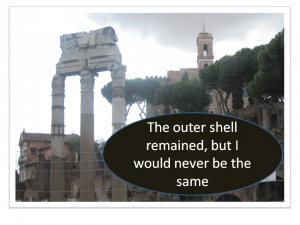 The ER placed a collar on me and told me I had whiplash … that was all. One week later I collapsed. I had developed meningitis of the brain lining. The doctors speculated that a virus had entered through the fracture in my skull. The deep coma that resulted kept me hospitalized for several weeks. I was finally released to return home, but not to a normal life. Days turned into weeks and months as I struggled with constant migraines and difficulty with movement. I couldn’t tolerate more than two or three hours of activity a day.

Everything Changed – The Losses Were Unbearable

I had been the sales manager of a Century 21 real estate office in Minnesota when the accident occurred. My husband and I were in the process of purchasing the business. In a heartbeat, I went from being an award-winning Realtor earning a medium five-figure salary to an invalid. I was unable to take care of my children or myself.

The sudden loss of income and mounting medical bills depleted our bank account quickly. We were forced to use credit cards to purchase groceries. The financial stress only intensified my inability to function. We were forced to tap the equity in our home.

The words coming out of my mouth were upside down and backwards, even though I heard them correctly in my head. My husband became so frustrated that he began to play a game with the children. He encouraged them to talk backward, too. I was humiliated at being made fun of in front of the boys. Yellow sticky notes appeared all over the house to remind me to feed the kids, wash the dishes, and, most embarrassing, go to the bathroom. My children could read, and inside that part of my brain that still functioned, I worried about what they must think of me.

Life didn’t improve much over the next couple of years. The doctors decided to 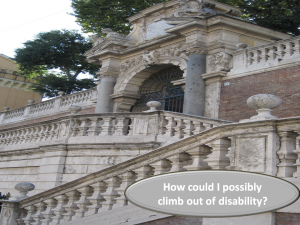 send me to Sister Kinney Institute in Minneapolis, where I would participate in the Pain Center program to “learn to live like this.” Those were the words the doctor used that day.

I cried all the way home. All I knew for sure was that I didn’t ever want to learn to live like that.

Was There Anything Left Of The Old Me? 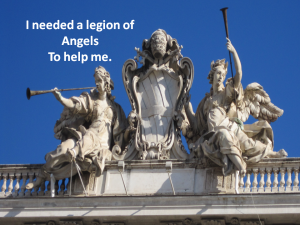 The damage done to the right frontal lobe of my brain created problems with left body function. There were days that I couldn’t use my left arm. I had problems controlling my left leg too. Drugs further complicated my life. Every specialist I saw prescribed narcotics to diminish the debilitating pain, and they paralyzed what little functionality I still possessed.

After my family doctor confirmed that I would go to the Pain Center, all I could think about was dying. I had been that low once before in my life. After years of unspeakable abuse as a child, I had tried to commit suicide at sixteen. This day was no different. If I were gone, my husband could remarry and my children would have a mother who could take care of them.

I collapsed in a chair and the tears wouldn’t stop. I remembered the doctors so many years ago when they told my mother it was too late to pump my stomach. It would be several hours before they’d know whether I would live or die. When I heard that, I suddenly wanted to live more than anything. I begged God to let me live.

He had answered my prayers that day thirteen years earlier. Was I really willing to give up again? I called a friend instead of reaching for the pills. Her husband had died recently, and she was probably the only person I knew who had lost as much as I had. We talked, we cried, we tried to just make it through the day.

God, Why Have You Abandoned Me?

The next morning I woke up angry. It was a fury, unlike anything I had ever 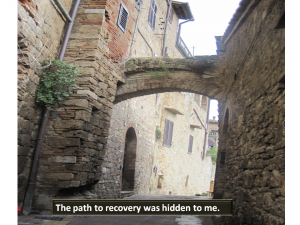 experienced. God had brought me to my knees the da before, but now I was willing to let him guide me.

After the boys headed off for school I was drawn to a closet where I had stored boxes from my childhood home. Those boxes had been there for years and I had not bothered to look inside them. I had no idea what I was searching for. I had more energy than I had experienced since the accident. It was as if a force much larger than I was pushing me forward. As I dug through the second box, my hand felt a cold, round object. I pulled it out of the box and held it high.

In my hand was an old metal vegetable can. It contained pencils and a ruler. I made it when I was five with the help of my grandfather.

I had been a prisoner in my own home for months as a result of rheumatic fever, and Grandpa found me crying at the window as I watched all the other kids playing on the school grounds across the street. I was sobbing that I couldn’t do anything. Grandpa led me into the kitchen, found the old can and some additional supplies, and guided me through the project. When we were finished he held up the decorated can and asked, “What do you think this is?”

“I don’t know, Grandpa.” I laughed. His joy and excitement were catching. His kind heart could make even the most damaged child smile.

Grandfather’s Hope for a Broken Child

“This is an I Can!” he explained to me lovingly. “Look closely at what we cut out. It is the letter I in all different colors, shapes, and sizes. I don’t ever want to hear you say you can’t do something again. You can do anything in this life that you want to. You just have to believe in yourself, your talents, and your strengths.”

It was one of the most important gifts an adult could ever give to a child … the gift of unwavering faith in oneself.

It wasn’t an easy journey, but over the next five years, I embraced the message of the I Can and regained most of my abilities. I played with an electronic memory game called Simon for hours each day. That helped me reprogram my brain. I demanded that the doctors treat me with exercise, diet, meditation … I made the rules.

The marriage didn’t survive the frustrations of my inabilities, but I did thrive 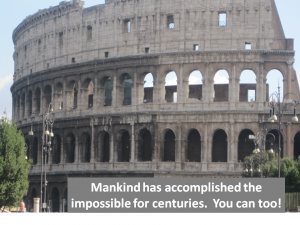 again. I entered a new field that provided set hours each day rather than the sporadic hours of real estate. I had a long and extremely lucrative career until I retired a couple of years ago.

Life Continued based on Grandfather’s Hope

The boys grew to adulthood and are the most amazing people. I am a loving wife, mother, and grandmother, and I am living my dream in retirement, writing a fantasy series about a little girl who is recruited by winged creatures from another dimension to help them protect the children of Earth. Through my protagonist’s adventures, I hope to encourage children who are being hurt to find the courage to seek help and motivate other young readers to help people who are in trouble.

My goal is to inspire children to reach their highest potential and to protect themselves from the dangers that exist in this challenging world. 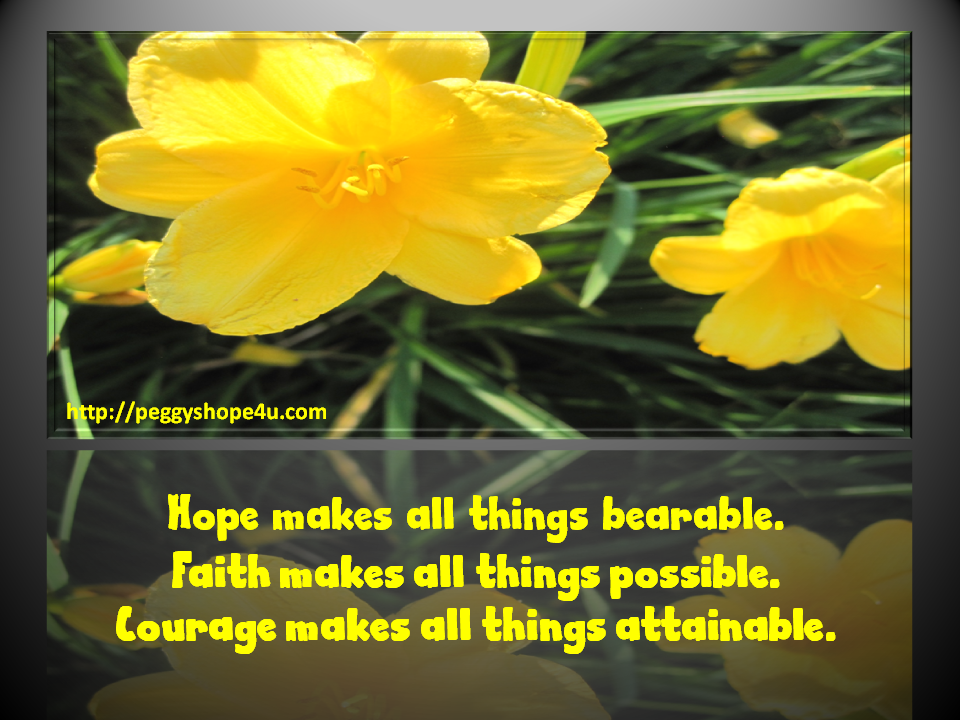 We all face obstacles in life. There are days that I wonder how I managed to survive everything. The answer lies somewhere between believing in myself and having the courage to face the challenges I encountered on my journey. The message I share with you and children everywhere is to never give up. Faith and perseverance will lead you through. I would not have believed in 1978 that I would ever write a book, but that was my childhood dream and I refused to give it up.

The “I Can” sits in a prominent place in my home. It signifies the best that humanity can offer as a symbol of hope to any child.

My grandfather gave me the faith to believe in myself. My God had never forsaken me. I had simply given up on myself for far too long. My prayers were answered when I was humble enough to listen to the answers. I was finally able to see beyond myself and understand that my two sons were my finest achievement in life. Their future was worth fighting a nearly impossible battle for.

What would this world become if every child made their very own “I Can” witha loving adult who helped them to believe their dreams can become their reality?

This story appeared first in Joel Comm’s “So What Do You Do?-Vol. 2” and also on my old website http://peggymcaloon.com