Writing About The Little Dog Who Inspires So Many

Yesterday became a big day very quickly. Not only did we celebrate Palm Sunday, but it materialized as the ‘Accidental Release Day’ for Cosmo Is Adopted.

Having the book release on Palm Sunday is definitely an accidental occurrence. I’ve learned after struggling with my traumatic brain injury in 1979 that it’s best to chuckle and move on when things like this happen.

Unfortunately, I’ll never know what happened. The ebook launched in spite of my intentions yesterday morning. I’d placed it in Kindle at the end of March with (I thought) a hold to keep it sleeping while I struggled to format the softcover.

When I woke up, I puttered around for awhile, did my daily devotions, and finally sat down at the computer to check something. After checking email, I went to Amazon to check on something. Suddenly, I sat there unmoving, stunned to see that Cosmo Is Adopted not only available for sale but holding the position of #1 in its primary category (Children’s Books – Adoption).

Gulp! Okay, this is a good thing. Quickly, I jumped into action to make marketing posters and start promoting the book.

As the day progressed, the book remained #1 in the Adoption category, #5 in Family Life, and #22 in Animals.

Let’s Start at the Beginning

We adopted Cosmo from Shih Tzu Rescue of Central Wisconsin in 2012. I have to admit; I fell in love with his picture on their website immediately. After calling the rescue, we discovered his availability still open. Rhonda suggested she could bring him by to see us. She planned a camping trip to Chippewa Falls that weekend, and she could work it out.

Then she dropped the bomb. Cosmo is blind.

Okay, I’m disabled too. Where is it written that I don’t have the heart to take on such an enormous responsibility?

When they arrived that weekend, Cosmo quickly began to pace around the living room to familiarize himself with his new surroundings. My heart nearly exploded when he hustled up the stairs and put his head through the railing spindles at the top. Was he smart enough to know it could be deadly if he wiggled through?

We did adopt Cosmo and immediately fixed Plexiglass inside the stair railing so I wouldn’t have to worry about an accident.

Without thinking, I began to say the word “careful” when he rammed into a stationary object. It wasn’t long before I discovered that I could yell “careful” as he approached something and he’d immediately change direction. (Nope, I purchased a “halo,” and he hated it! He’s a ‘do it without help’ kind of guy.)

Cosmo is one smart little dog!

A few months after we adopted him, we took him to the University of Minnesota to see if we could do anything to restore his eyesight. (The vets surgically removed his right eye before we adopted him, and he was blind in his left eye.)

That little dog is amazing in his ability to get around, manage the deck and steps to go outside by himself and maneuver around solid objects. I believed he could see light and dark or shadows, at the very least.

Wrong! His severed optic nerve showed up clearly in the examination, and there is no chance of us being able to do anything to restore his sight short of stem cell research.

Then the first storm hit.

I’d never seen anything like it. For whatever reason, Cosmo determined he could go high and avoid the danger. He launched himself like a missile from the floor to the sofa and over to the end table, en route to the recliner and bookcase.

Okay, this wasn’t even remotely funny. There was a huge possibility Cosmo could get seriously hurt in his state of panic.

We tried everything. Then, we leashed Cosmo to the table leg and sat on the floor with him; we tried a collapsible playpen with a zippered roof and anything else we could think to do. That little dog was Houdini revisited. He managed to get out of everything we attempted.

I was inflexible on the position not to put him in a cage. We’d already discovered he’d broken half his teeth when trying to chew his way out of the cage at the dog pound in Milwaukee when his owner died. All those teeth had to be cut out.

We tried medicines, a thunder shirt, herb aromas, and more. Nothing worked! I tried holding him close. His back legs were like a kangaroo and left me bruised as he desperately tried to get away.

The only solution was to monitor his movements. Mike and I began to take turns when it stormed at night. I usually took the midnight to four, and Mike took the four to eight shift.

It’s crazy, I know. But, if you could meet Cosmo and fall in love as we did, you’d make allowances too. Cosmo Is Adopted, and his problems become mine.

It was during one of those storms that Cosmo proved his worth. Unfortunately, it was nearly three in the morning when I got up to get a cup of hot tea to keep me awake until four.

As I started to walk away from the sofa, a huge clap of thunder and lightening hit. Out of the corner of my eye, I saw Cosmo launch from the floor toward the love seat. With one bounce, he headed for a table holding a huge glass vase.

I twisted around quickly, grabbed him in mid air, and went to the floor. You see, it wasn’t just the head injury I suffered from the car wreck. I also have massive damage to my back and neck. The twisting motion did some significant harm, and the instant agony took me to the floor with the dog held close on top of my stomach. He was unhurt.

Then, I began to panic as I let the little dog go.

Except, he didn’t go.

He brushed his nose against my cheek.

Suddenly, I realized I was having an asthma attack. I couldn’t breathe, and I couldn’t get up to find my inhaler.

Panic set in quickly as I gasped for breath.

Cosmo Is Adopted to the Rescue

Our ‘cowardly lion’ little dog immediately brushed off his terror as the lightening and thunder intensified.

He used his little stub of a nose under my neck to try to help me lift my head. Over the next few minutes, he made multiple trips to the closed bedroom door, throwing the entire weight of his body against it.

The noises he made in the kitchen could wake the dead, but not my husband.

I gasped for air. Still, I couldn’t get enough oxygen in my lungs to be able even to yell out.

Cosmo kept running back to me, trying desperately to lift my head from the floor. His efforts were well-thought-out and methodical.

At some point, I heard the metal can in the kitchen tip and hit the floor. I could hear the top pop off and the dry dog food as it scattered across the wood of the kitchen floor. That is the noise that awakened my husband who came running. He immediately realized I was struggling to breathe and ran to get my inhaler.

Life has remarkably changed since we adopted Cosmo. Most of it is for the better, but he is a challenge. He’s terrified to be left alone, so at the young age of seventy, I’m hiring teenagers to babysit again.

So, I simply chuckle and realize this dog came into our lives for a reason. Ninety percent of the time, Cosmo’s one of the greatest dogs I’ve ever had.

But, he presents more than a few challenges.

What I find remarkable is that his journey to becoming a family member involved all the things our children experience. Kids have to face the challenges of learning new information, adapting to new situations, depending on friends to help them and needing love.

I wrote the Elle Burton books to help older kids, but the little ones face challenges too.

Two years ago, my son and his wife adopted two beautiful children. Their backstory is heartbreaking, but they know they’re loved. Actually, I wrote this little book just for them for Easter. They loved it, and their mother begged me to publish it for other kids.

The Story Cosmo Is Adopted Grows 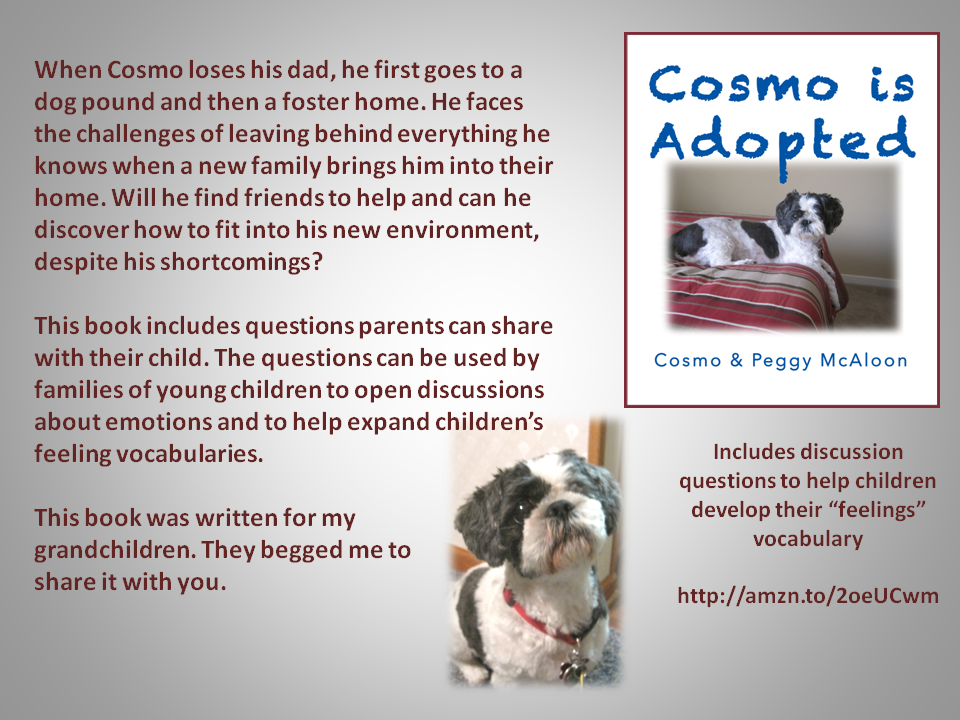 So, the original Cosmo Is Adopted started out as Cosmo’s story only for my grandchildren. As I thought about how to present this as a published book, I immediately turned to Catherine Gruener, an award-winning Psychotherapist, and Encouragement Parent Educator. Then, I sent her a copy of the original little book and asked her to prepare a list of discussion questions for this book. She’d done that for my middle-grade Elle Burton book.

I was delighted with the two pages of discussion questions she provided, but the book still wasn’t long enough to make a marketable product.

My editor suggested I add a segment at the end on the Shih Tzu breed and foster homes. It was a brilliant suggestion, and I ran with it. Then, I added pictures of Cosmo and his new little sister Hailey at the end of the book for the young children to color as their parents go through the discussion questions with them. 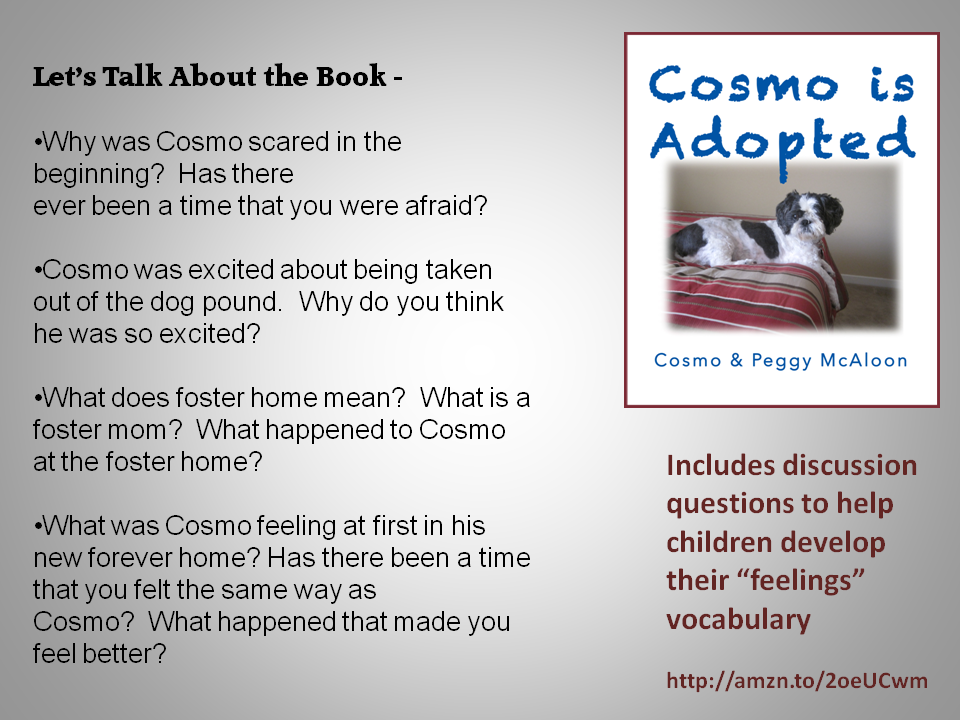 The review copy of the softcover book Cosmo Is Adopted should arrive next week. I wish I’d finished the project before I launched the ebook. But, you know what? I truly believe everything happens for a reason. Furthermore, I simply wasn’t willing to pull a book in the #1 position yesterday.

Perhaps a young child out there, who was struggling, needed this book on Palm Sunday.

I’ll never know, but I’ve learned to adapt and enjoy each moment as it happens. Some of my best successes were of an ‘Accidental Nature, ‘ and I’ve discovered that’s perfectly fine.

You can click here to get to Cosmo Is Adopted. The book is targeted to children ages 6-9.