Today’s Saturday’s Pick is Author Christy Jackson Nicholas. Christy, also known as Green Dragon, is a creative spirit who loves to engage in digital art, beaded jewelry, writing, and photography. In the real world, she’s a CPA but her passion for the arts was born of a mother, grandmother, and great-grandmother who were also artists.

Christy loves to draw and create her own art. For her, it’s more of an obsession than a hobby. Her passion for art comes alive under a crimson sunset, beside the waves of a remote beach, and when holding a beautiful flower in her hand. She reacts to these powerful stimulants by creating a new piece of jewelry or by taking pictures.

Christy participates in local art and craft sales, combining her love of beauty with her financial background, turning it into a perfect business. She also sends her art to various science fiction conventions here and abroad.

Congratulations on your new release, Christy. It looks so intriguing.

For readers who haven’t yet seen this new release, I’m sharing the Book Synopsis for The Enchanted Swans:

In pre-Celtic Ireland, Fionnuala was a fae princess, born to a life of luxury. She knew her duty and loved her family. She missed her mother, who died in childbirth when Fionnuala was but ten years old. Still, she had hopes and dreams of love and a full life.

All her dreams were stolen from her, ripped away in a torrent of envy and magic.

Now she must care for her three brothers while learning to live under an evil curse. Will she find a way to break the spell, or would they remain swans, tethered to three places for nine hundred years?

We traveled in Ireland a few years ago, and you can feel the magic throughout the land. My head spun with story ideas as we toured Dublin and traveled the countryside. Swans appeared in the waters as we looked out the window of a hotel situated on an inlet. What was your inspiration for writing this novel?

I read a book by Juliet Marillier, Daughter of the Forest. In it, she novelizes another fairy tale, one about a girl whose six brothers were transformed into swans. She was cursed with silence for two years while she knit shirts for each brother from nettles. It’s a fairy tale I remembered as a child, so I wondered if I could do something with another fairy tale.

How did you come to pick swans as the result of the curse?

It’s actually based on an ancient Irish fairy tale, the Children of Lir. I tried to stay as true as possible to the original tale, but I added in some details to make it a richer story.

What one character trait allows Fionnuala to cope with the challenges she faces under the curse and allow her to protect her brothers?

She has a well-developed sense of duty, having been born the eldest child of a king. With that sense of duty, she marshals despite the length of the curse. 900 years is a long time to attend ones duty!

You have written two travel guides to help travelers traverse the Emerald Isle and the landscapes of Scotland. Can you share a few travel tips?

Always plan a trip with the idea you’ll return. There is just so much to do, you can never see it all; certainly not on one two-week trip! Concentrate on a few areas and stay 3-4 nights in each. This way you’ll get to know those areas better and get a true taste of them. Don’t do the ‘green blur tour’ or ‘plaid blur tour’ so many people feel they must.

If you could spend a month in either Ireland or Scotland, which country would you choose and why?

I would have to choose Scotland, simply because I’ve been to Ireland more often. There are more places in Scotland I’ve not yet sampled!

You have three books in the Druid’s Brooch Series. The first book, Legacy of Hunger, takes us back to the potato blight of 1846 in Ireland. In the book, the young heroine, Valentia McDowell travels from her father’s prosperous farm in Ohio to a land where people are struggling to come to the United States before they perish. Her goal is to find a lost family and missing heirloom. Why did you choose an American girl to follow this quest instead of a young Irish girl?

During the Great Hunger, millions of people left Ireland for a better life elsewhere. I wanted to tell the story of someone who made the opposite journey. So, I based many of the details of Valentia’s background on my own family tree, including her last name, the location of her father’s farm near Alliance, Ohio, and some of the other family names.

In Legacy of Truth, the second book in the Druid’s Brooch Series, young Esme is struggling in 18th century Ireland to protect an heirloom left by her grandmother. When her parents leave for America, she’s forced to learn to live on her own and avoid a treacherous sister who is intent on stealing the brooch which is said to contain mystical powers. Please tell us more about Esme’s sister and how the family dynamic influences Esme as she tries to protect the brooch.

Growing up with a twin has an odd dynamic both for the twins and for the rest of the family. Her sister is ambitious. Not evil, per se, but definitely doesn’t qualm at hurting others to get what she wants for herself and her children. Esme resents her sister’s ambition and the lengths she goes to get what she wants. Their parents are pretty ineffectual in this conflict, as they are struggling just to keep the family farm sustainable.

Legacy of Luck is the third book in the series. The book is about an Irish Traveler Éamonn, who loves gambling, women, and drinking, not necessarily in that order. But he’s entangled in a true mess when he falls for fiery redhead, Katie. When she’s married to a Scottish Traveler, Éamonn travels to Scotland to find her, with the help of Katie’s sister and cousin, and the magical brooch gifted by his father. Their quest takes them across the Irish Sea to the Isle of Skye, encountering war, betrayal, death. What human characteristics help Éamonn to make his own luck?

He’s stubborn. And by stubborn, I mean, flying in the face of all that is logical stubborn. Everyone tells him he’s on a fool’s errand, but he doesn’t care. He knows what he wants and is willing to do anything to get it. 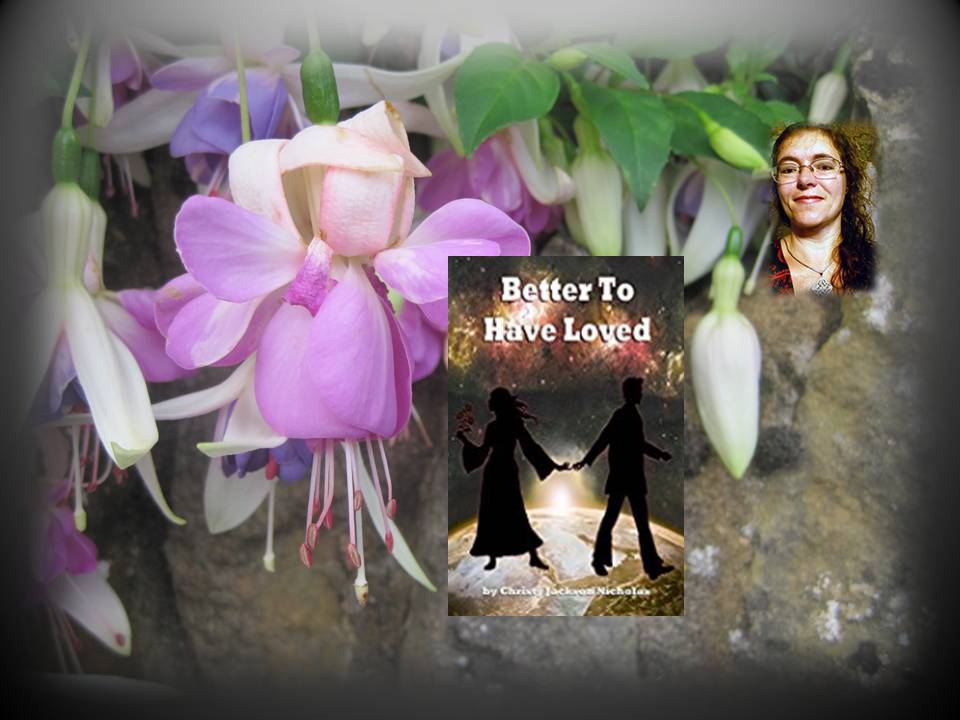 I’m told Better To Have Loved is in part based on your own adventures in life. What part of the book drew in your heart and soul and left you struggling to continue?

Better To Have Loved is the story of my parents’ 30-year search for love, and my own efforts to find a father who didn’t realize I existed. It was the first novel I wrote, and what inspired me to start writing novels in the first place. I felt that story had to be shared with others, so I did.

You take our protagonist, Julie, to multiple destinations, including the psychedelic lifestyle of San Francisco’s Haight-Ashbury. I spent a month there in 1966, so I’m very familiar with the times. Were you there too?

I went in 2000, but my mother went in 1967. I did a lot of research into the time, the ‘scene’ and of course, asked my mom about her impressions. Om the end, I had to make up a lot to fill in the details!

Of all the destinations Julie traveled to as she experienced new romance, which was your favorite?

Definitely Edinburgh, Scotland. I’ve been there a couple times, and the city is simply beautiful. There is so much history, architecture, and of course, men in kilts. (We loved Edinburgh too!)

Thank you so much for sharing some insight on your books with our readers today, Christy. It has been delightful to meet another author who enjoys some of the same forms of art that you do. I believe the Creative Spirit lives in everyone if they can simply discover how to unleash its powers.

To Connect with Author Christy Jackson Nicholas, use the following Links: