Celia and the Fairies by Karen McQuestion

If you liked Elle Burton and the Reflective Portals, you’ll fall in love with Celia and the Fairies. Like the Elle character, Celia exhibits kindness and positivity. Well, most of the time she does. Like any child, she has moments when she doubts her strength. That’s a good thing for everyone to remember.

When Celia Lovejoy’s grandmother moves in with her family, she tells her granddaughter magical stories of fairies living in the woods behind the Lovejoy home.

Ten-year-old Celia believes they are just that-stories-until the day she receives an unexpected visit from Mira, a real, live fairy.

Mira needs a favor in a matter of the utmost importance. It seems that Celia’s house and the adjoining woods are in danger of being demolished to make way for a new highway.

The person behind this horrible plan? Vicky McClutchy, a spiteful woman who holds a childhood grudge against Celia’s dad. Fairy magic can counteract this evil, but it will only work with Celia’s help. Aided by neighborhood friend Paul,

Celia begins a danger-filled quest that takes her out in the woods at night to face her greatest fears. This magical tale of a plucky girl combines an entertaining story with an underlying message about the power of ordinary kindness.

Celia Lovejoy is ecstatic when she discovers her grandmother will soon be moving back into their home. Celia didn’t know her Grammy had the same room she now inhabits when she was growing up.

She couldn’t have even guessed that her grandmother climbed down the vines from the balcony of her bedroom at night to frolic in the Watchful Woods with the fairies.

You see, Celia’s father has an old nemesis in town and her name is Vicky McClutchy. She wants nothing more to humiliate Celia’s dad for withholding friendship and acceptance when they were kids. Her revenge will be to destroy the only home Celia’s ever known and take the family business, Lovejoy World.  Not only is their highest selling game, Trixie-Dixie the Good Deed Game at risk but so are the employees they have treated like family through the years.

Celia and the Fairies is a story of the remarkable courage a ten-year-old child can muster when everything they love is threatened. It’s a lesson in friendship and loss. While children may have nightmares about the shadow things that whisper fear into their ears, they will be empowered to believe in things that are far greater than themselves. For any child who has faced adversity or bullying, this book will give them hope to make the changes to improve everything.

Addendum to the Review

This is just for my readers. I have to tell you when I closed the book, a cold chill went down my spine.

This book is about a ten-year-old girl (just like Elle in Elle Burton and the Reflective Portals).

The author also lives in Wisconsin. Funny, that’s where Elle and I live.

And, there’s a character in this book named JJ. (Just like Elle’s little brother, who was named after a childhood neighbor of mine in Iowa.)

So, I’m guessing the same fairies of the woods whispered the story into Karen’s ear that shared Elle’s story. Now, if I find out that Karen McQuestion lives next to a lake, I’m going to lock the doors and never go out again!

The bestselling author of Hello Love, Karen McQuestion writes the books she would love to read–not only for adults but also kids and teens. Her publishing story appeared in the Wall Street Journal, Entertainment Weekly, and NPR. Karen has also appeared on ABC’s World News Now and America This Morning. She lives with her family in Hartland, Wisconsin.

Other Books by Karen McQuestion: 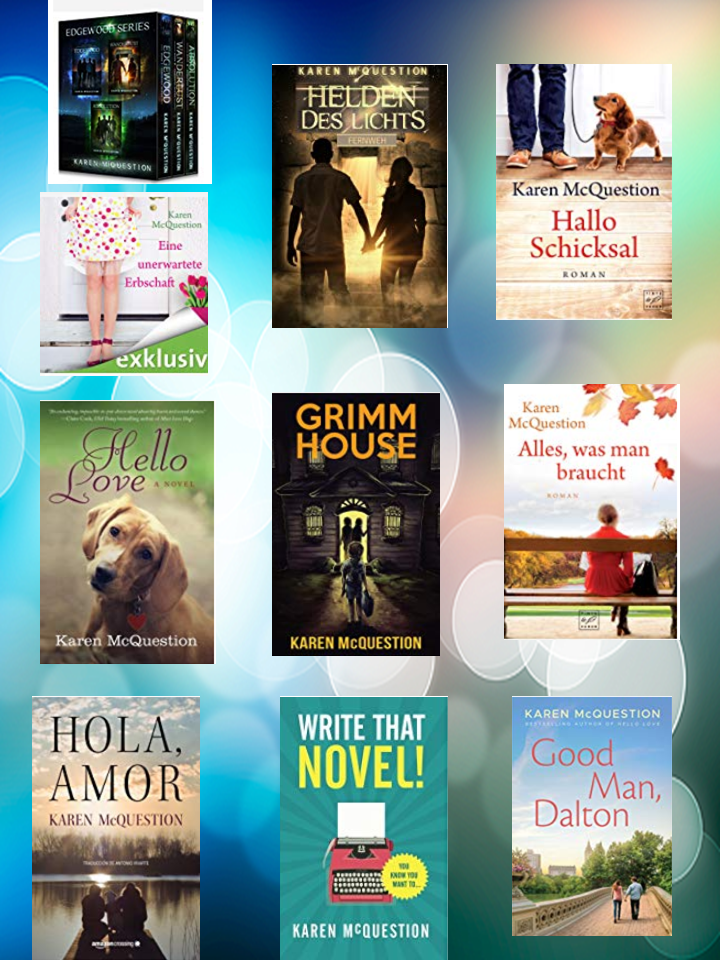 You can connect with the Author

A new chapter will be released each day up to and through Christmas. Happy Holidays!