The Adoption of Cosmo — Hope for New Beginnings

I have two grandchildren who had a pretty rough beginning in life. When my son and his wife adopted them, I watched as they struggled to trust and love. I can’t begin to imagine the tragic circumstances of their early years, but I wanted to find a way to help them adapt to their new life. It suddenly occurred to me that their struggles paralleled much of our little dog’s struggles. The adoption of little Cosmo occurred about a year after we lost our companion of fifteen years, Shansi. Cosmo belonged to an elderly gentleman in Milwaukee who passed away suddenly. Someone took him to the pound and he lost half his teeth trying to chew his way out of the cage.

I’ve often wondered how terrified he must have been in that cage. Without his eyesight, he had no idea what had happened. That gave me an idea last spring. We have tons of pictures of him, so I decided to write a little book in PowerPoint for the grandchildren. They were so excited when they read it that my grandson ran around the house yelling over and over, “Cosmo is Adopted!”

My daughter-in-law asked me to turn the little story into a book so other kids could enjoy Cosmo’s story. With the help of an award-winning child counselor in Chicago, we built an entire book around the original story. A portion of that book is below. I can’t think of a more uplifting holiday story.

The Loss Before Adoption 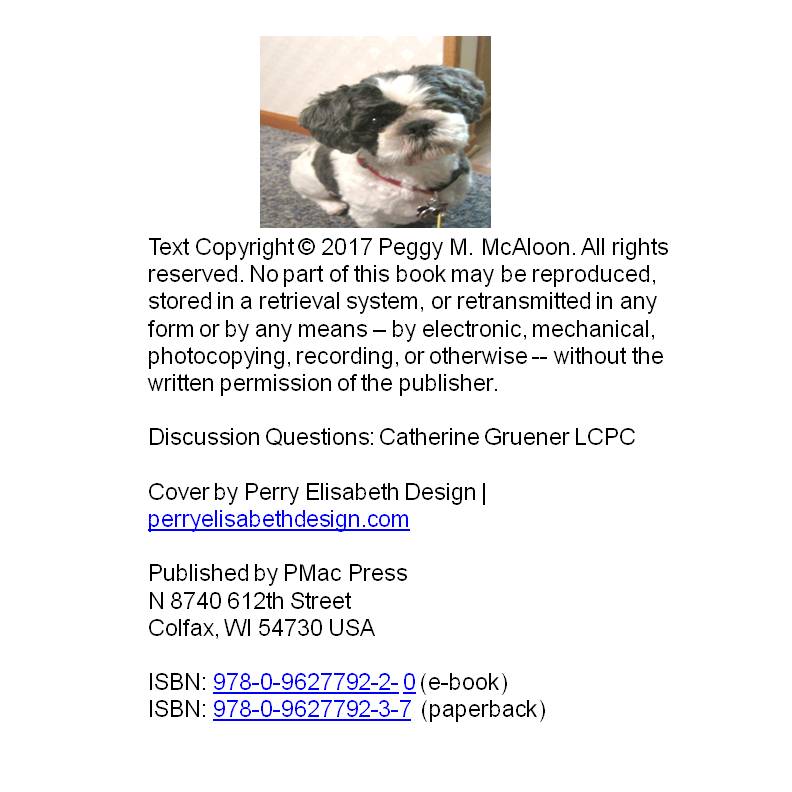 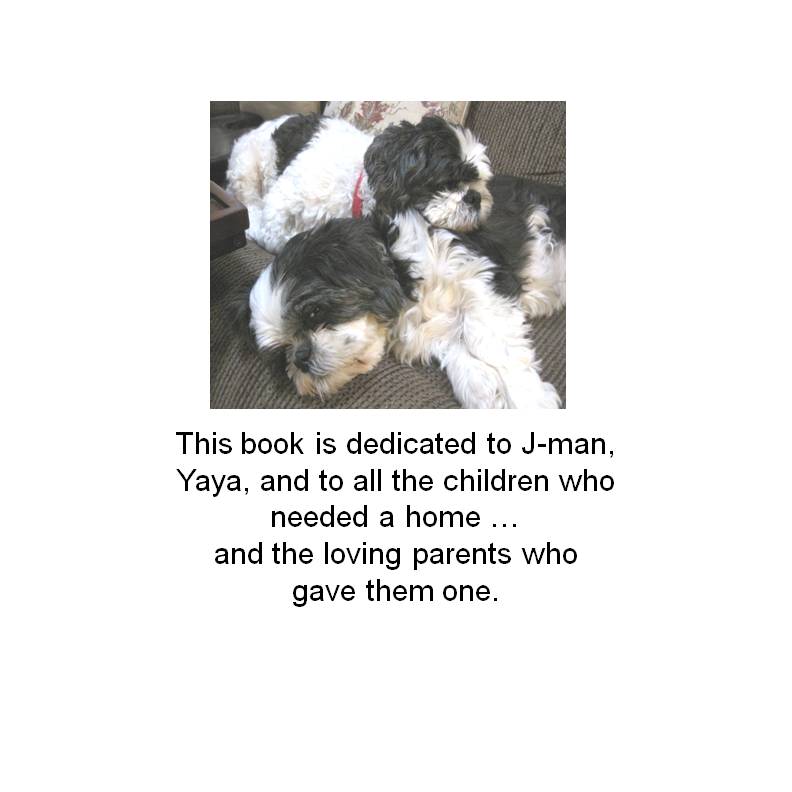 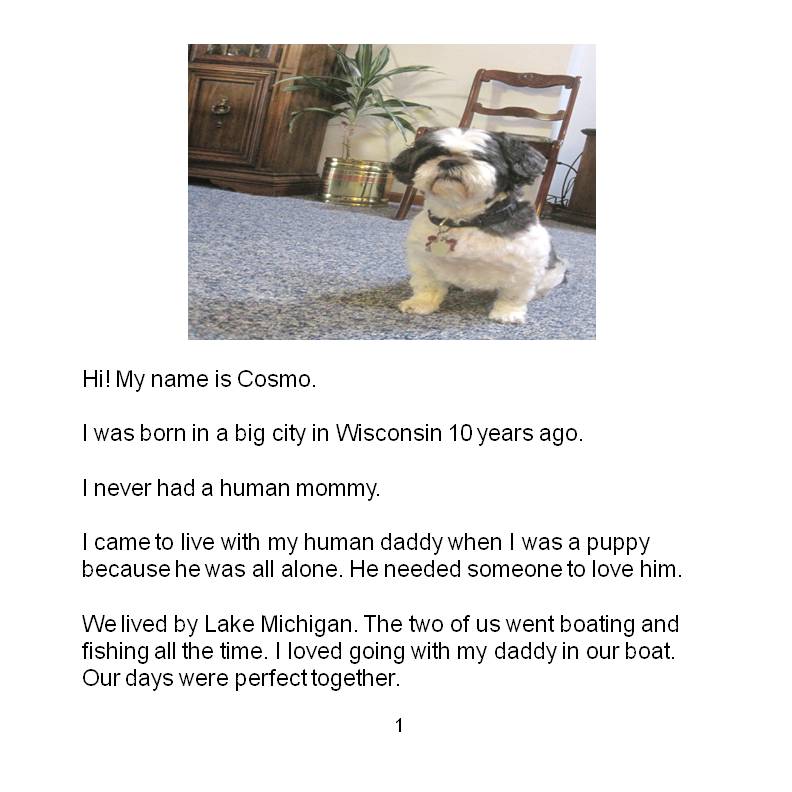 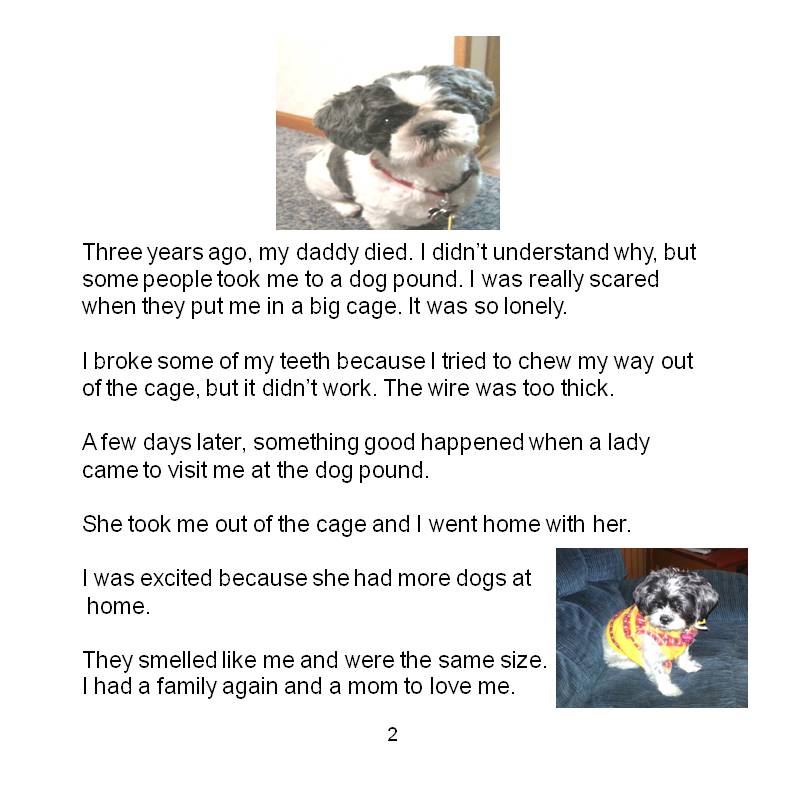 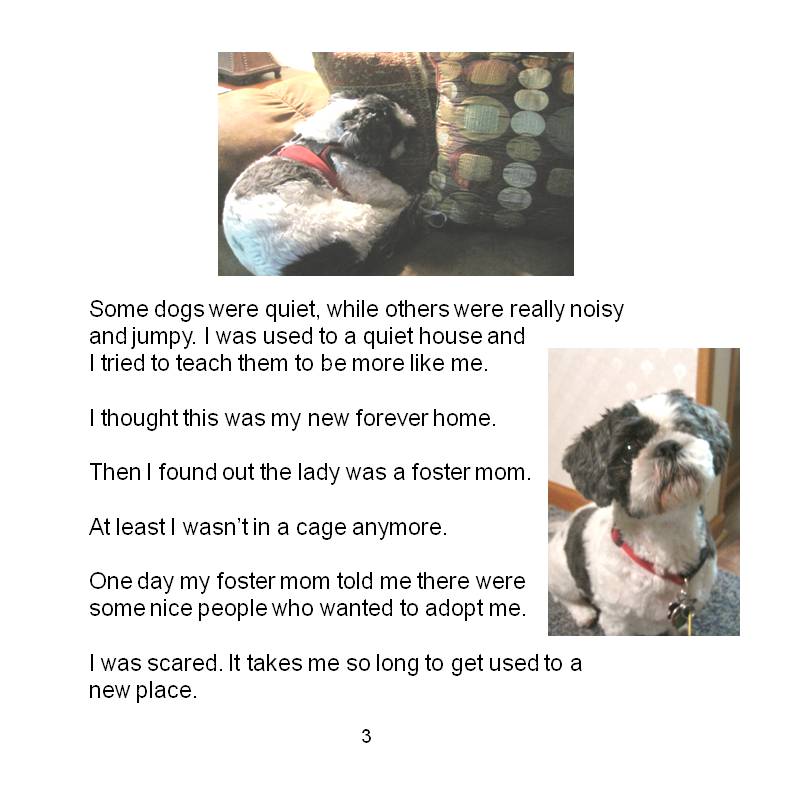 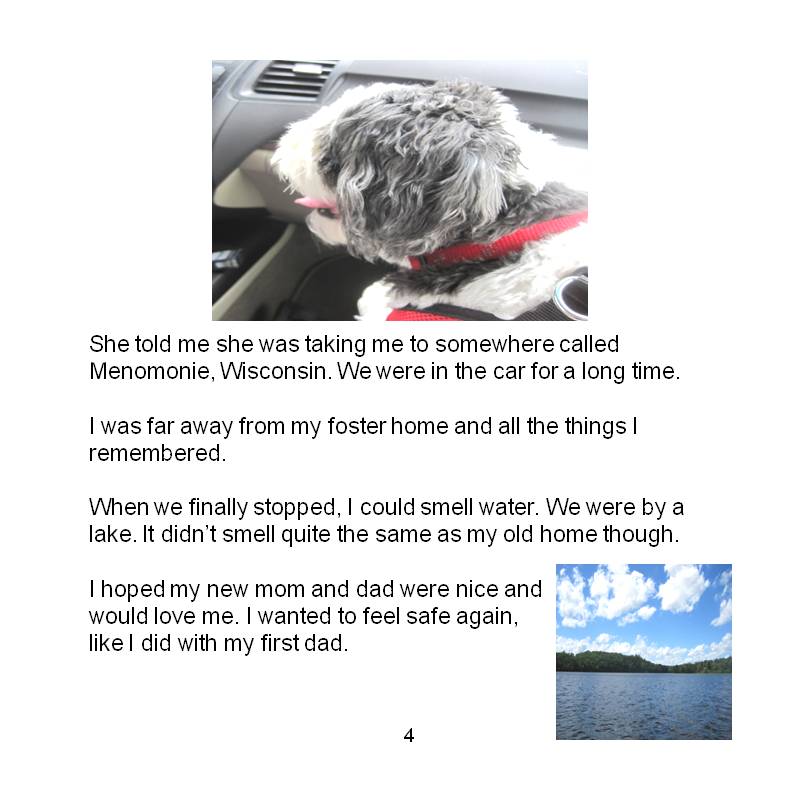 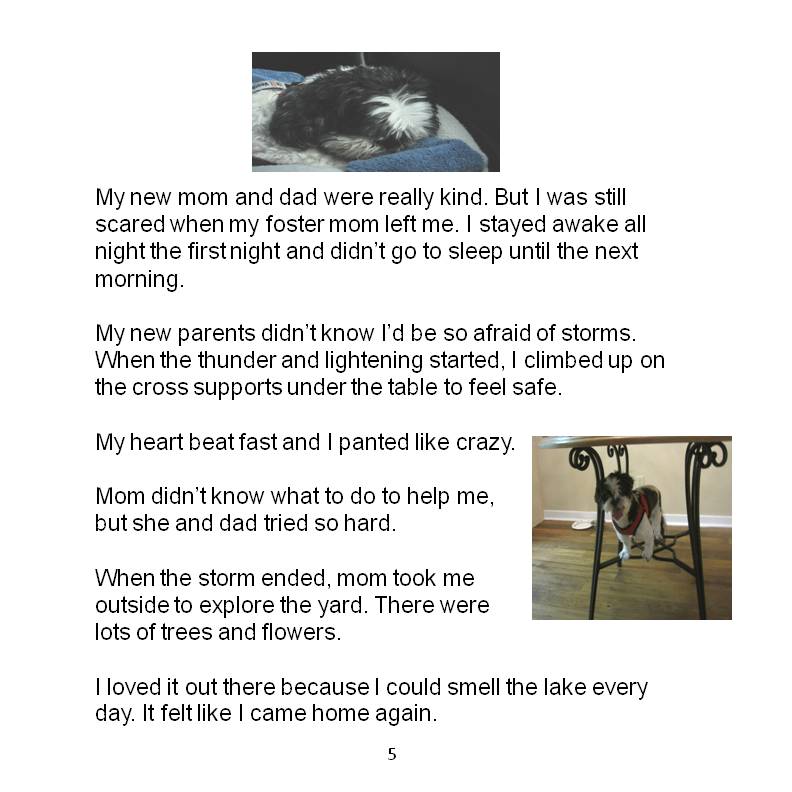 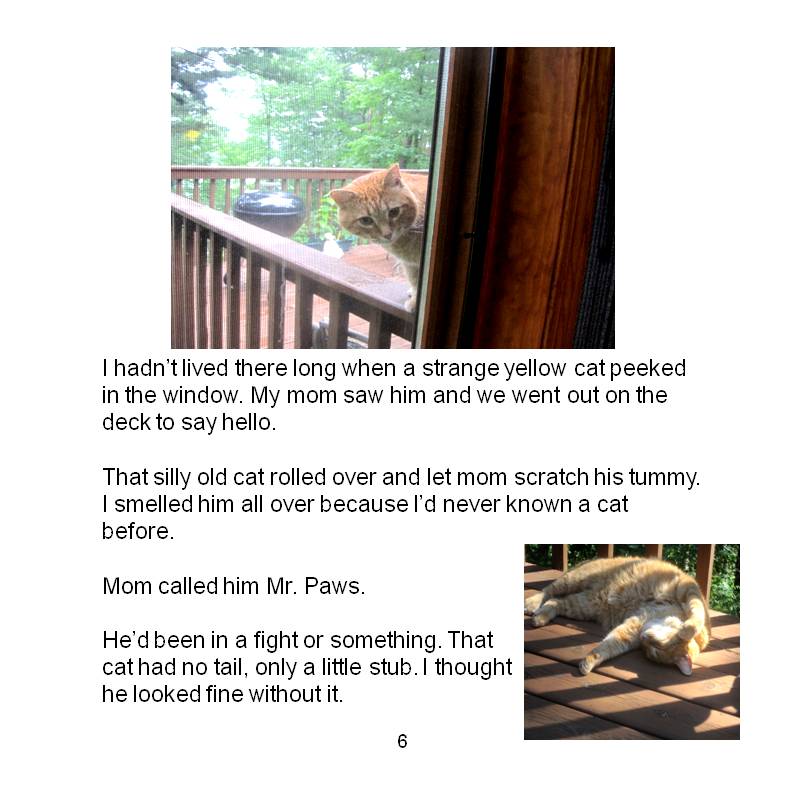 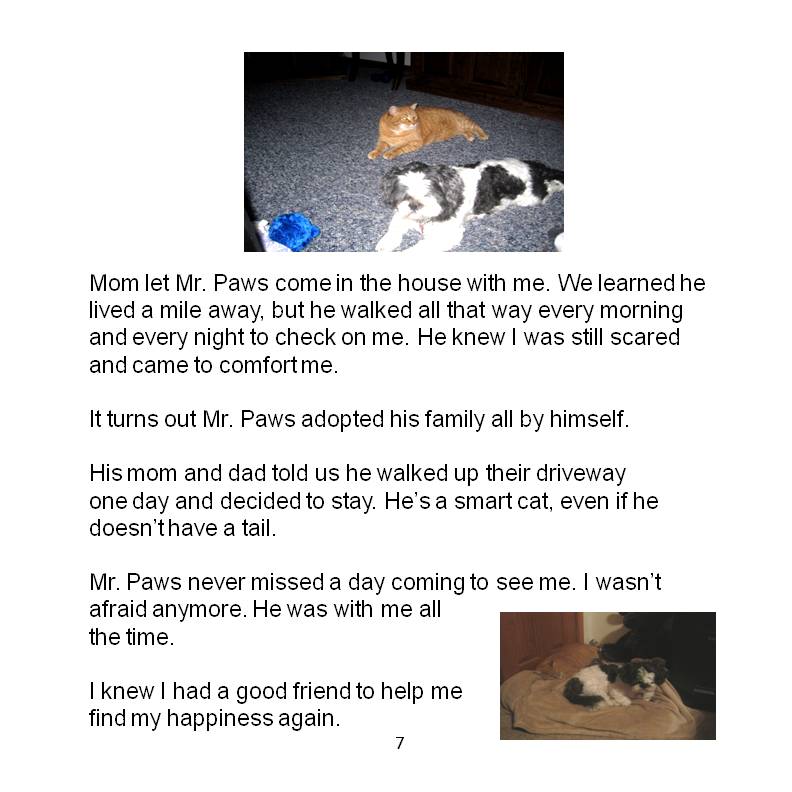 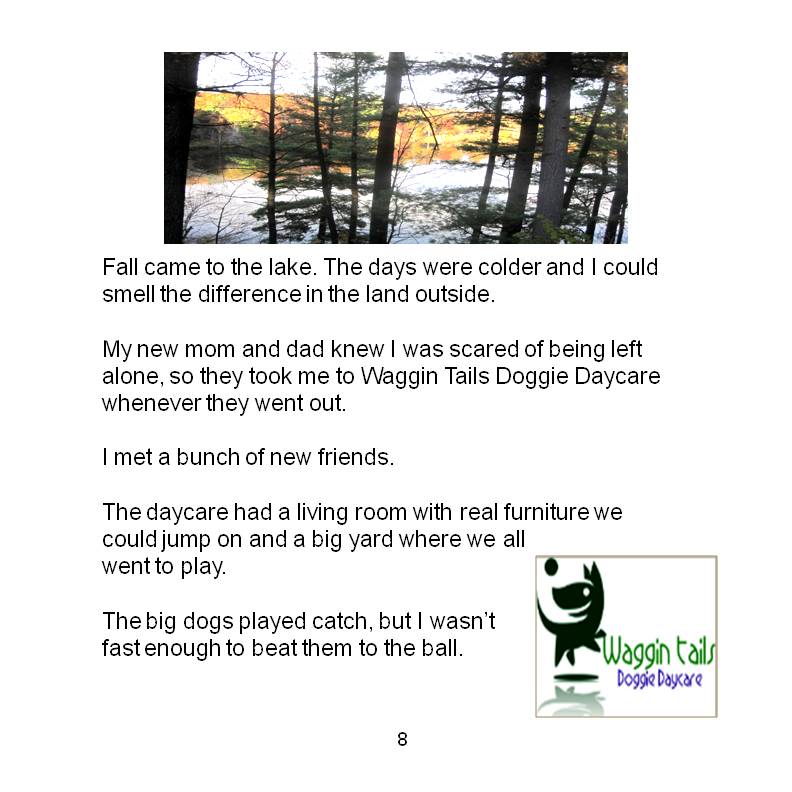 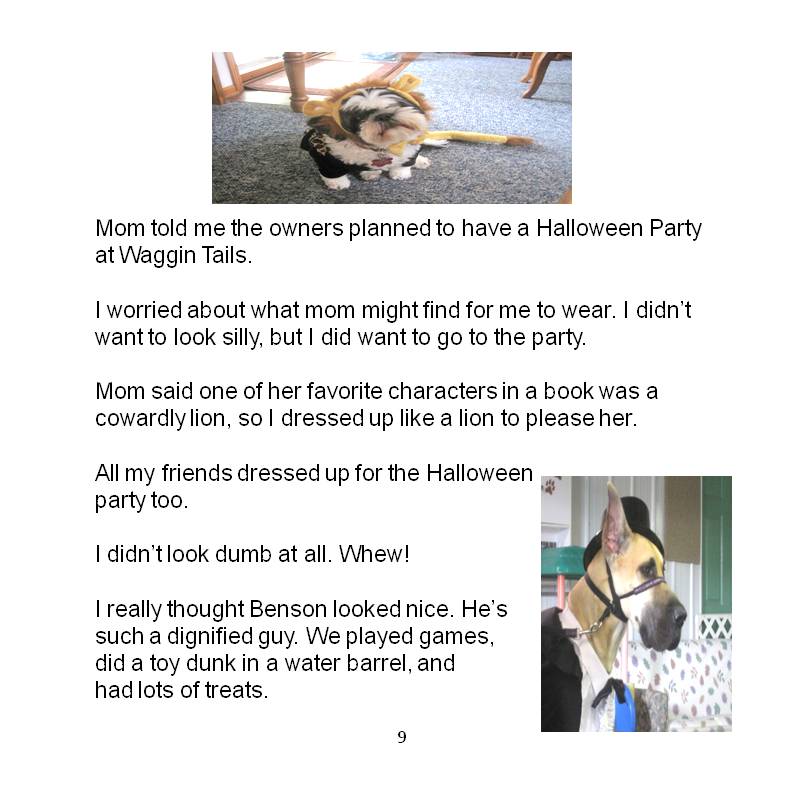 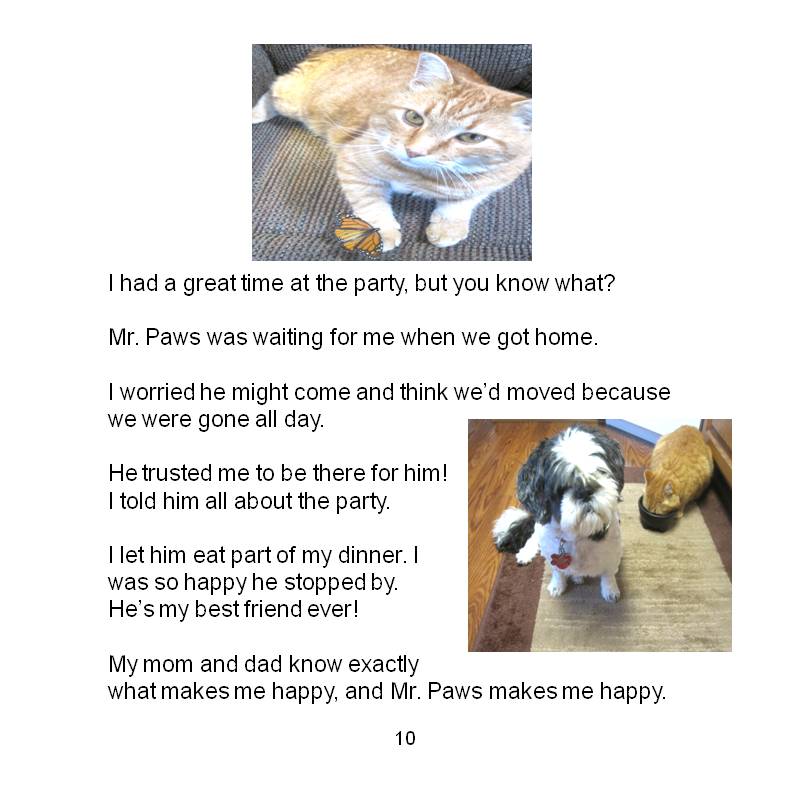 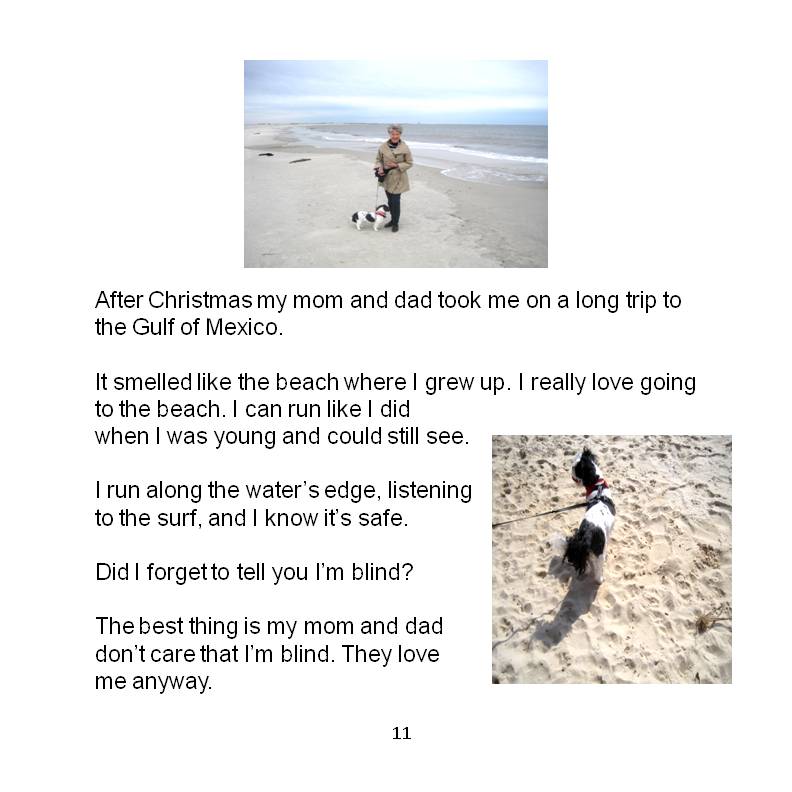 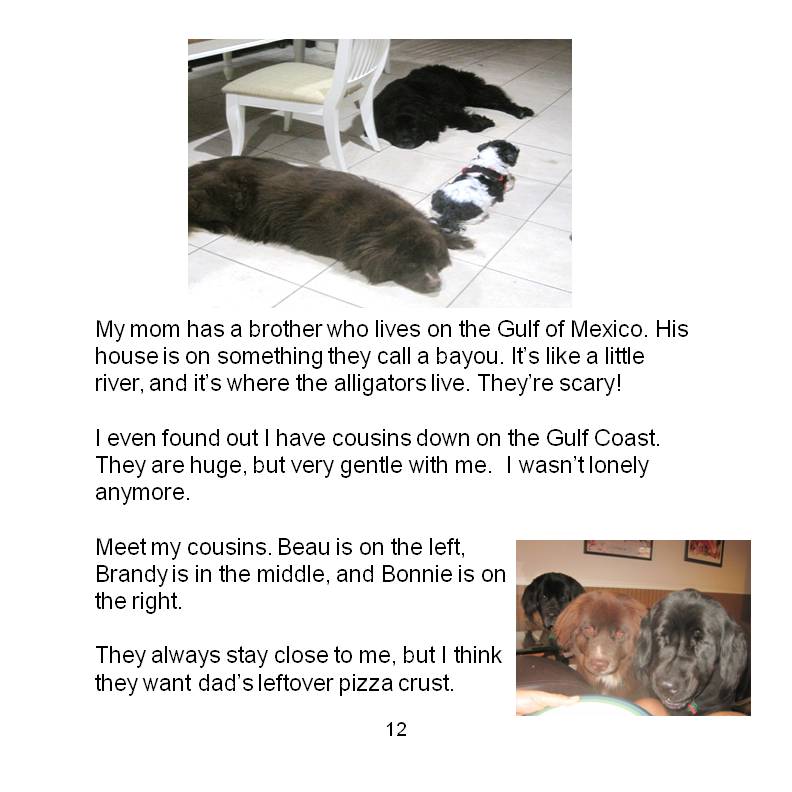 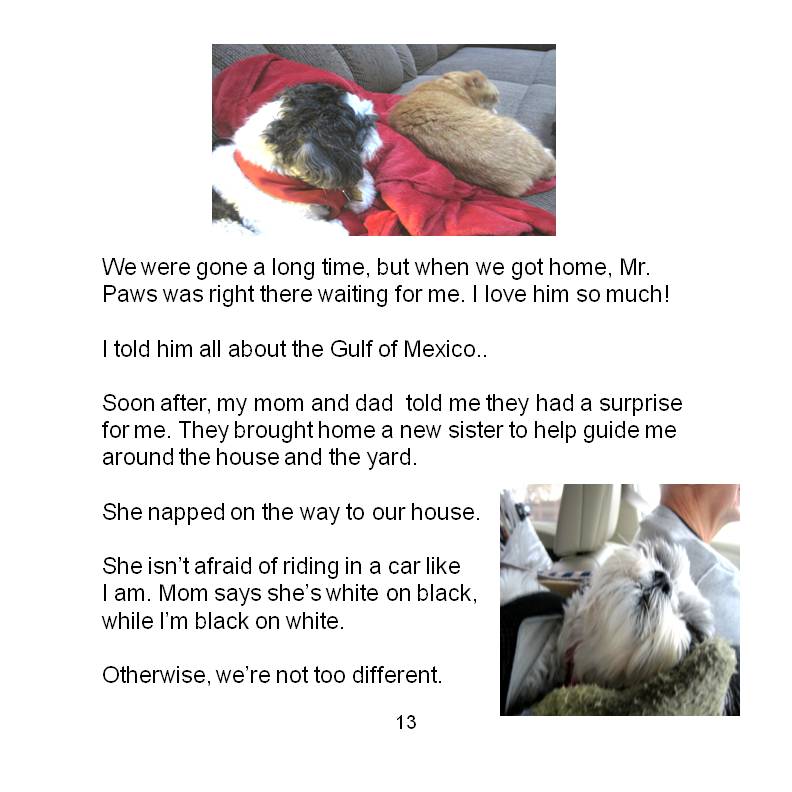 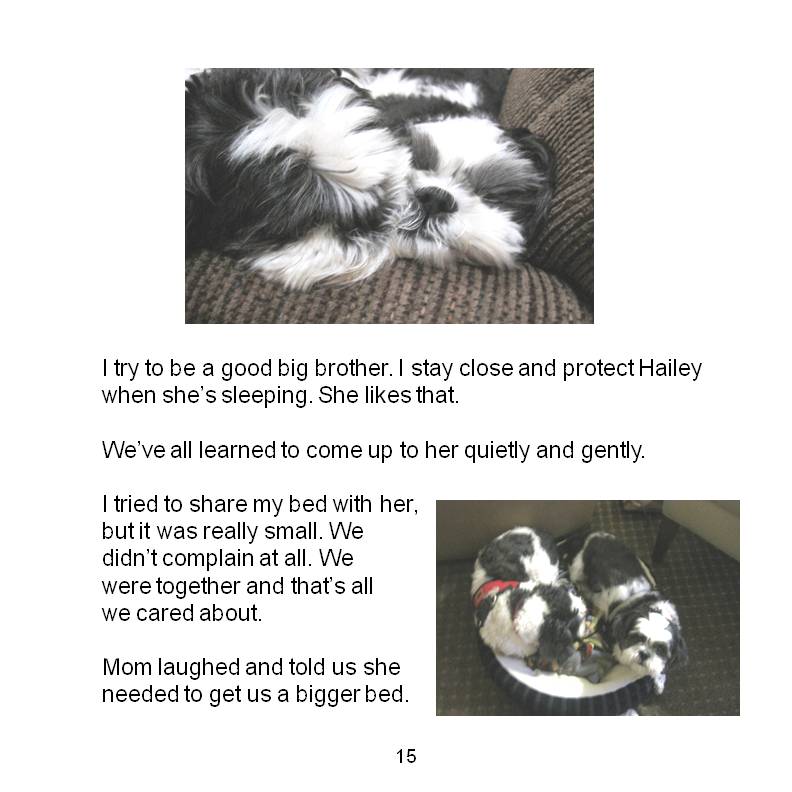 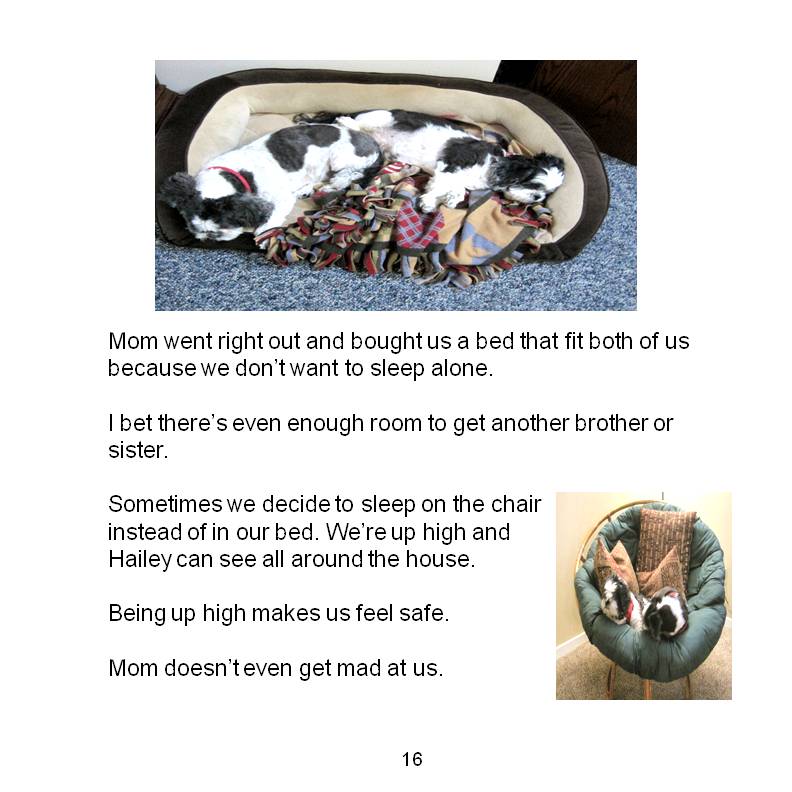 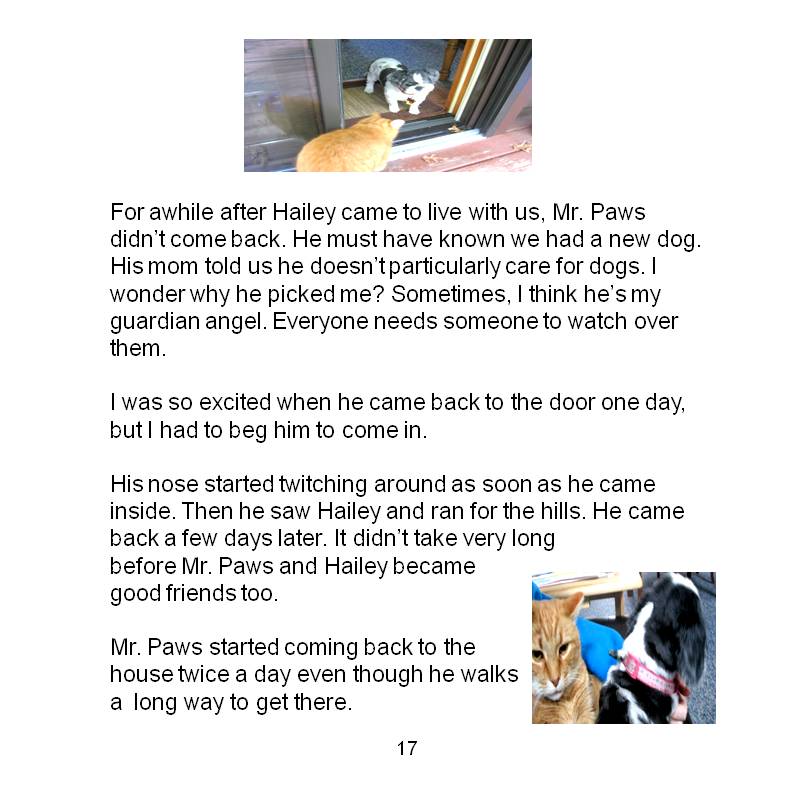 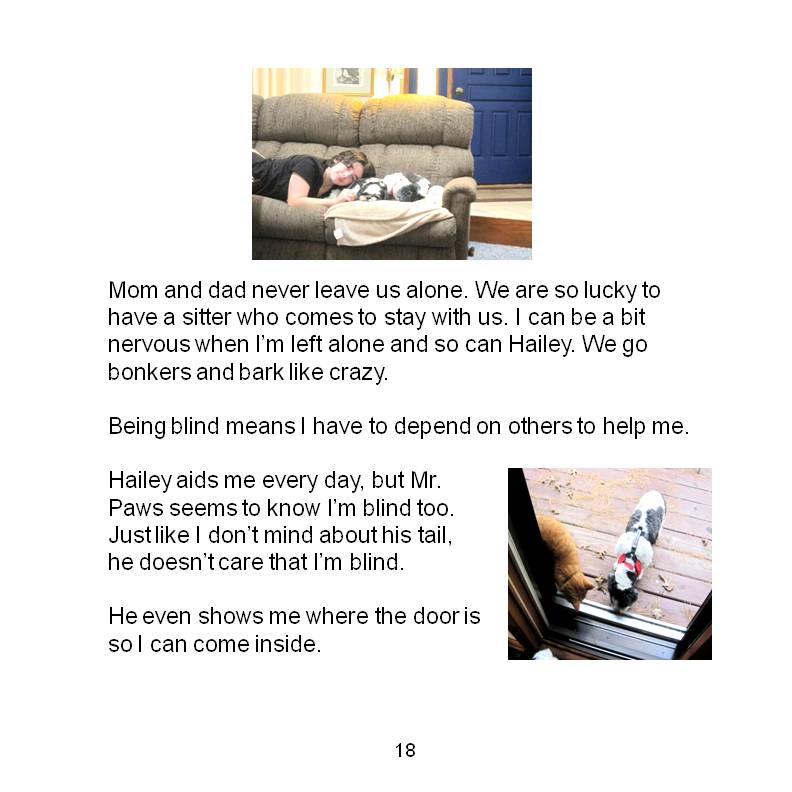 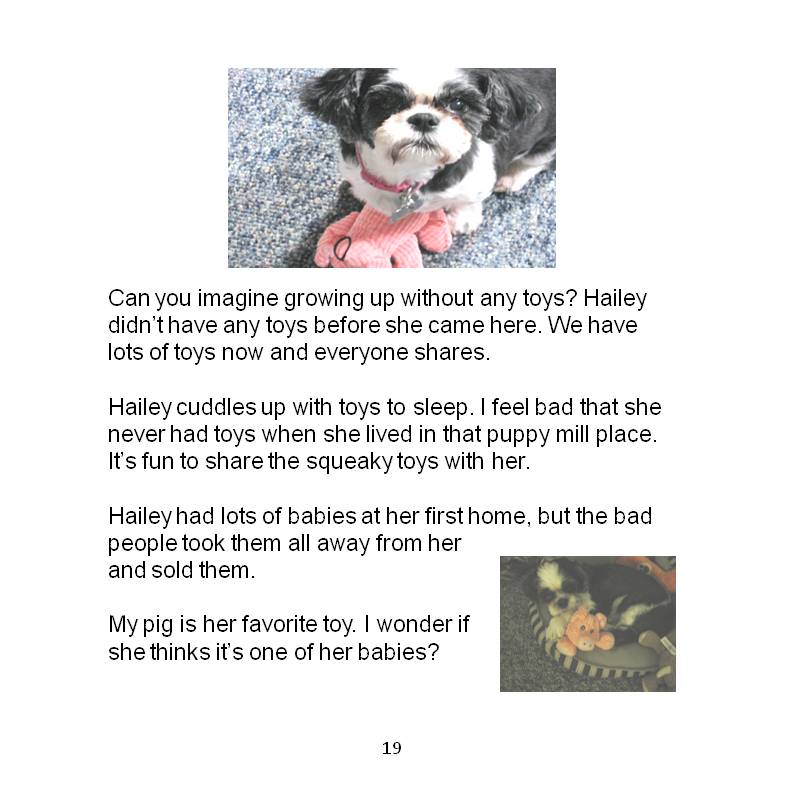 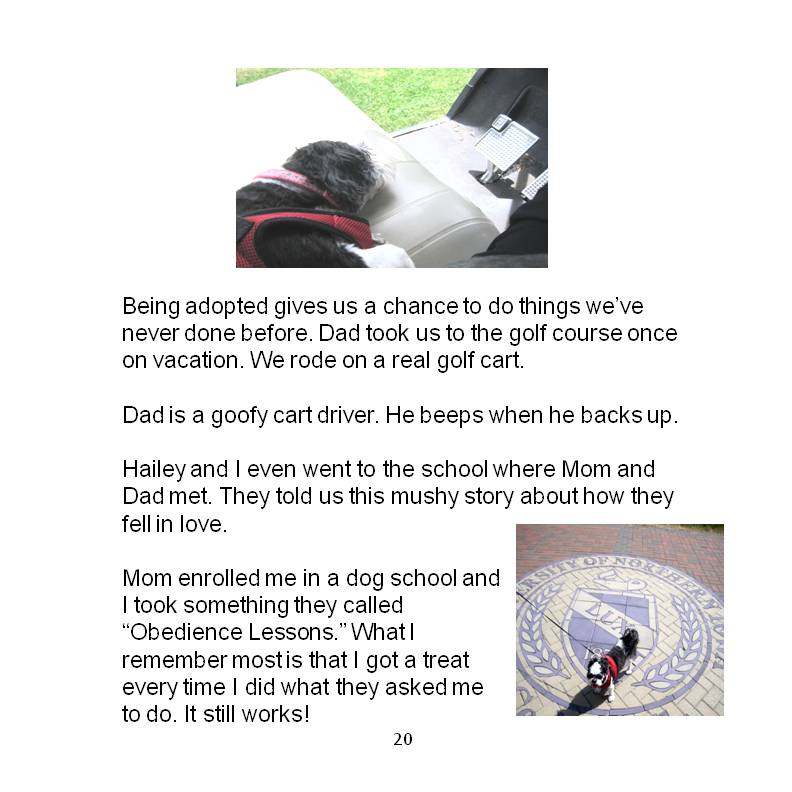 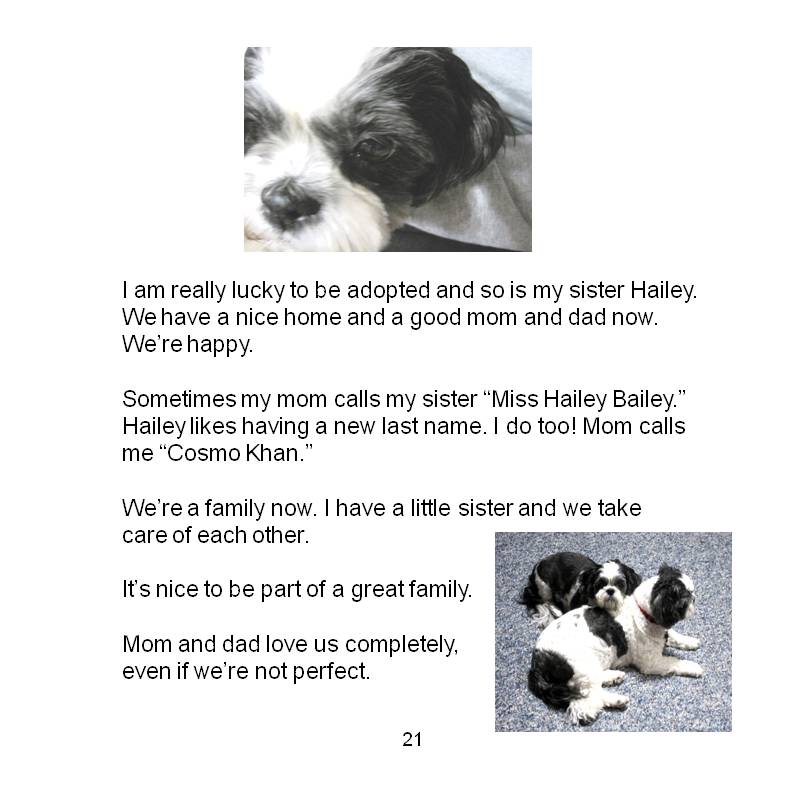 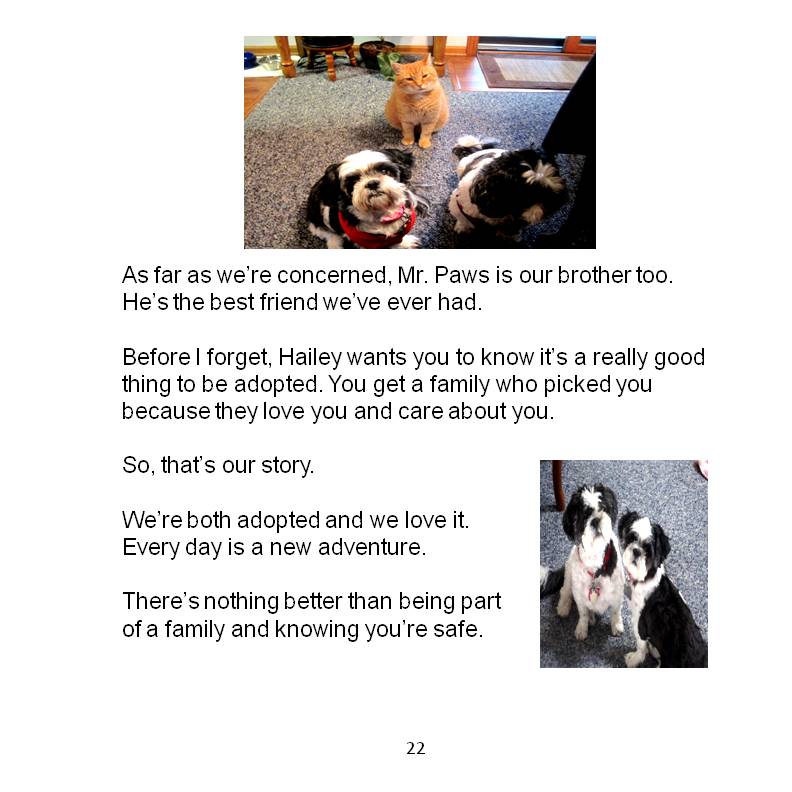 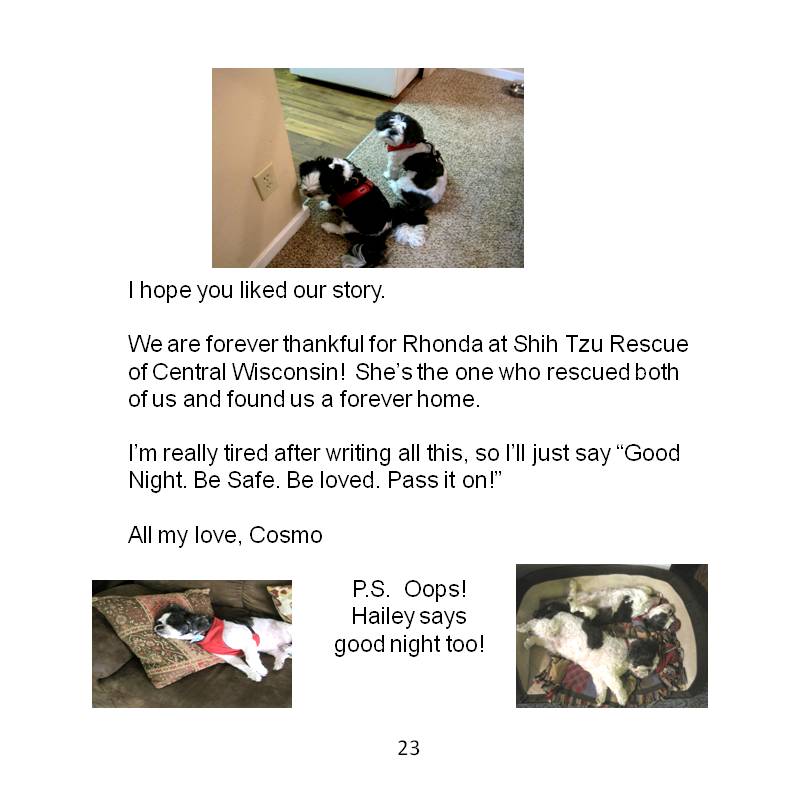 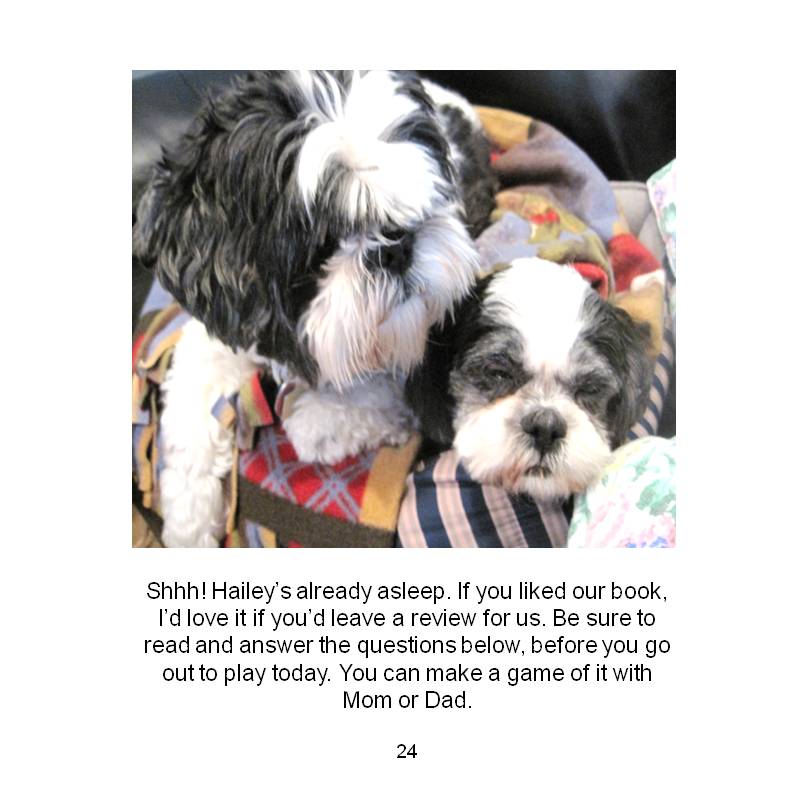 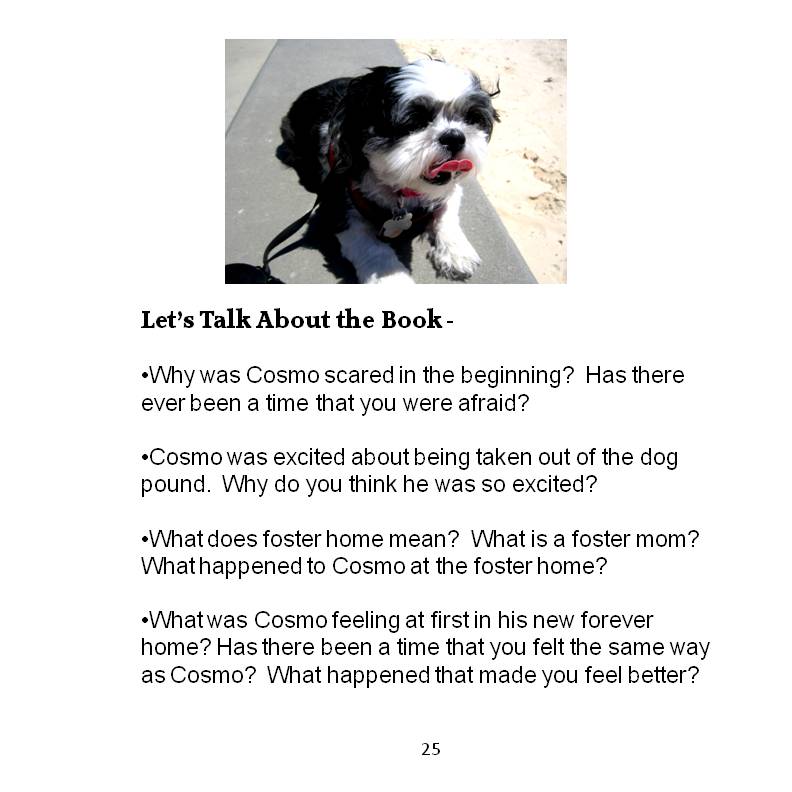 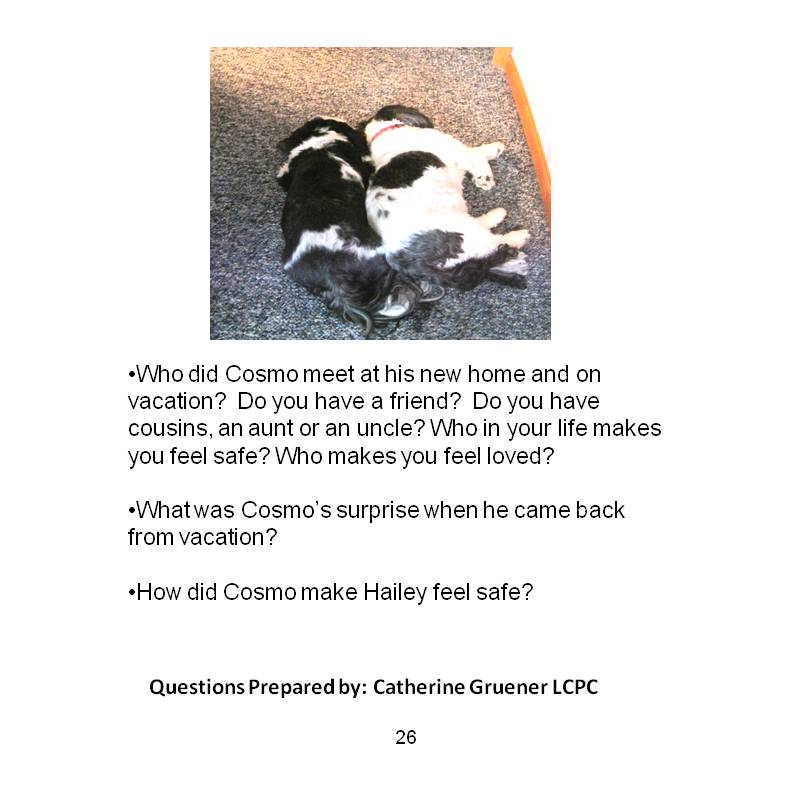 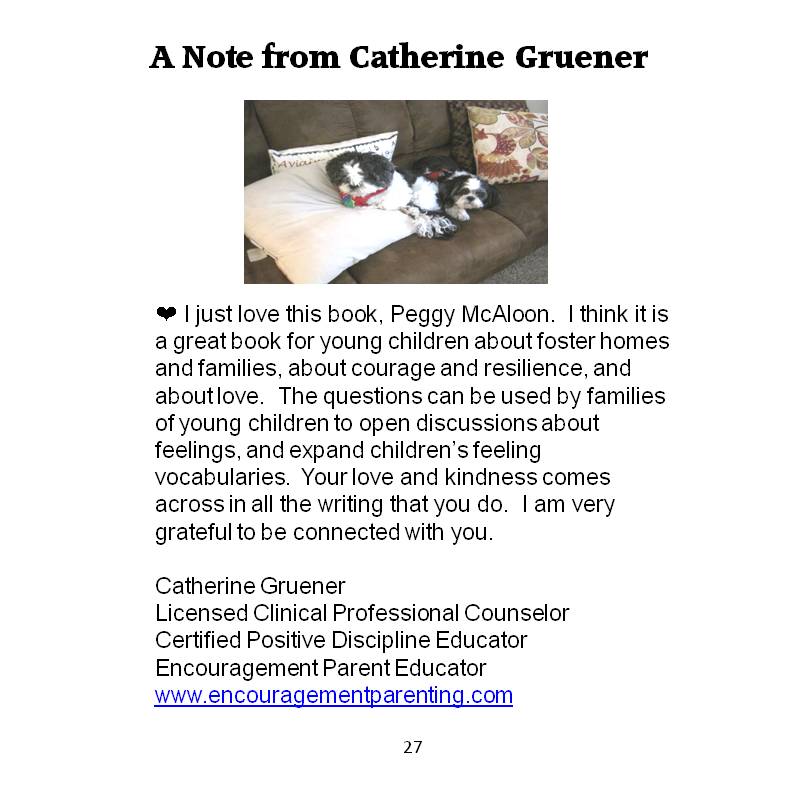 The Magic of Adoption

This post represents about 50% of the book. Adoption is a difficult topic, especially for older kids who remember what life was like prior to their adoption. I can honestly say that if I’d been asked to list attributes, our new grandchildren definitely fit my criteria. Yes, they continue to have some meltdowns, and like Cosmo, their needs are far greater than most kids.

When we decided to adopt Cosmo, I mentioned to my husband, “Where is it written that I don’t have the strength of character or enough heart to learn how to adapt to a dog who can’t see?” What I saw in Cosmo, was a little guy who simply wanted to love and be loved. Our grandchildren are no different. Color and background have nothing to do with the feelings of love. The world opens up when you finally see those first few glimpses of trust.

Helping Kids – Even Those Who Are Adopted

My goal is to inspire kids to be kind to others and to allow them to stand up to the myriad of social injustices they will meet along the way. All of us deserve a chance at happiness in an environment that feels safe.

We’ve known for a couple of years that Cosmo has a liver that simply isn’t working correctly. We’ve been able to keep him healthy and happy with the loving help of our vets in Menomonie and those in Ocean Springs.

Last Thursday, we realized something was terribly wrong. We took him to the vet and discovered his pancreas is now also failing. We’ve been trying to get him to take the new medicine and eat, but it’s not going well. This is the little dog who saved my life during an asthma attack. He is the most cuddly dog I’ve ever had. If we lose him, it’s going to be impossible to deal with the loss of our best little friend. Hailey watches over him constantly, as she always has. I really worry what she will be like if we lose him.

And so, dear readers, please send positive thoughts our way. We hope it isn’t the end of the road for Cosmo, but the memories of the wonderful years we’ve had with him will live forever in our hearts.

Cosmo and I both pray there is someone in your life who will find hope in his story. Everyone needs someone to love them and friends who are constant.

There are two more sections to the book, but I didn’t have room to put them here. If you want to find out more about Shih Tzu’s, check out Cosmo’s foster mom’s site.

The Adoption of Cosmo Update

Cosmo became very ill at the end of November. He’s been treated for liver problems for three years, but now his pancreas was involved too. The vet did everything he could to help Cosmo get well, but on Saturday our beloved little dog laid down and refused all food and medication. On Monday, December 4, I asked God for a sign that this was really the end and it was time to say good-bye.

At 9:10 A.M. on December 4th, Cosmo crossed over the Rainbow Bridge. Hailey and I got in the car to drive home from the vet’s office. As I turned on the car, the radio sang these words: “Sleep in Heavenly Peace.” On the drive home, every couple of miles, a beautiful male pheasant stood at attention at the side of the road as we drove past. I’ve driven this road hundreds of times, and I’ve never seen a pheasant before. It felt like an honor parade.

I take comfort in believing Cosmo will be reunited with his original owner today, an elderly gentleman from Milwaukee who preceded him across that same bridge many years ago. This isn’t the first time I’ve heard God’s word. He has always held me up during the difficult times, and this was no different. His messages were humbly accepted. Good-bye, dear little friend. Thank you for all the blessings and love you added to our lives!

2 thoughts on “The Blessings from Adoption Abound”