We were down south for the winter when I received the call that mother was dying. Nothing prepares you to release someone you love into the realm of an angel.

She had struggled for years with bipolar illness and only weeks earlier had been sent to the hospital from the nursing home because she was highly manic. They found her eating the dirt out of the flowers I sent for Valentine’s Day. When I asked her why she was eating the dirt, she mumbled something about it being an antidote for something that was poisoning her.

By the time I booked my flight early the next morning and reached her, she could no longer speak. She was not agitated, just delighted to have me beside her. Her only way to communicate was to nod her head with a yes or no.

I spent that day calling all the people she loved and asked them to talk to her. I firmly believe the loss of those we love is easier if we have the opportunity to say goodbye.

My oldest son was in Europe and went into the Sanctuary of a church after talking to her. I knew his heart was breaking. He begged me to let the doctors put in the stomach tube and keep her alive until he could get home.

The stomach tube was a huge problem for me.

At Christmas, I brought Mom to our home in Wisconsin and for the first time in years spent a pleasant week with her. I was hesitant when she asked me to start writing some things down. She wanted to be sure I knew what songs to play at her funeral and who would be designated to carry the casket. I chided her at the time and told her we didn’t need to do this at Christmas; we had plenty of time. She was insistent.

She also started talking about the beautiful soul who had been in the other bed in her room. My mother explained the stomach tube the doctors surgically installed in her friend. She said her dear neighbor ended up suffering another six horrible months. She asked me never to allow them to do that to her.  I made a promise.

When the doctors had called from the hospital, they told me they would have to insert a stomach tube. I nearly fainted as I heard myself repeat mother’s words. I could not approve something I had promised her I would never do. They decided to send her back to the nursing home on comfort care. I needed to come quickly.

After I had finished the phone calls, I asked her if she wanted communion. She nodded yes, and I called her minister and asked her to come to the nursing home. She was struggling so hard to breathe. She couldn’t eat because everything was aspirating into her lungs. She was burning up with fever because she had contracted MRSA, a contagious and antibiotic-resistant infection. She kept trying to say something, but I couldn’t understand her words. It finally dawned on me that she was asking for ice. She loved crunching on the crushed ice when I was a kid, so I brought her the ice to help cool her body temperature.  She patted my hand and tried to smile, but one side of her face was hanging down. She had suffered a stroke before I arrived. 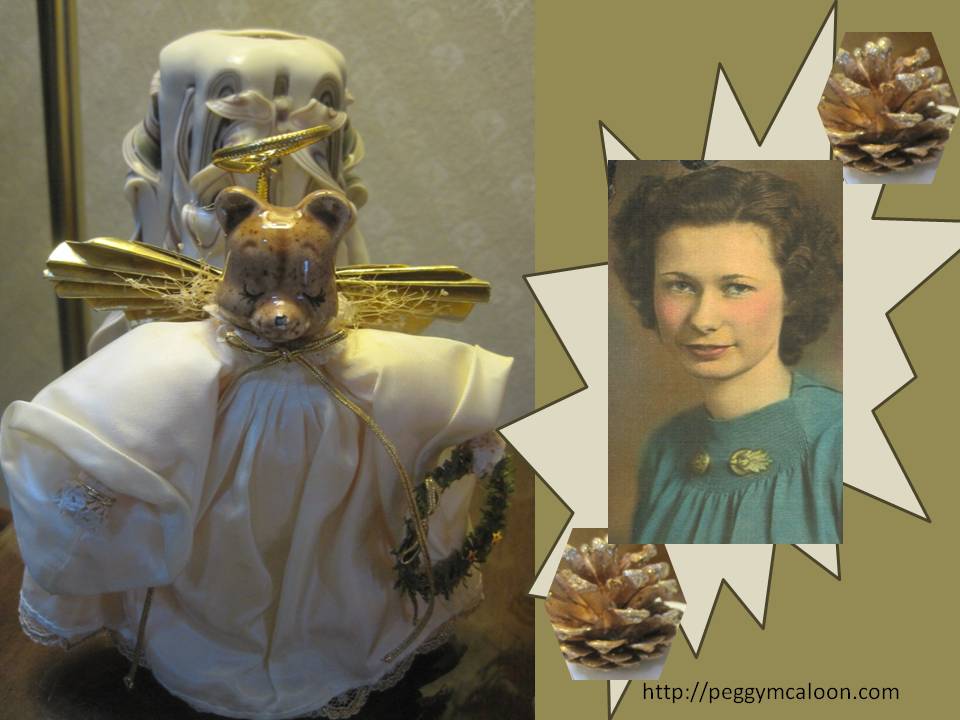 Do Something to Help My Mother!

I wanted to scream at people to help her, but she was on comfort care and at 94 I knew she was ready to make the final journey…I was suffering more than she was.

She sat bolt upright at about 1 AM on my last night by her side. She struggled, but she did say three last words to me: “Am I dying?” Family and friends have asked what my answer was. I told her the truth, and that seemed to calm her.

We all drove down to Iowa for the funeral and then I flew back to the coast for the rest of the winter.

When I returned home in the spring, I planted a memory garden with her favorite flowers and the red bud tree she so dearly loved. I purchased two angel statues and placed them among the flowers. Each morning when I arose, I went out to the deck and tried to have the conversation I so desperately needed as her child and was unable to receive on her final day.

(I had to stop the story here for awhile. The tears began to flow, and I couldn’t  see my computer screen)

I looked out over her little garden, remembering all the beautiful moments we had after I became an adult. She had become my best friend. She was no longer missing as she had been so much when I was a child.

And then it happened.

A monarch butterfly flew up to my face. It hovered there for a moment and then it flew over, and a wing brushed my right cheek. I couldn’t breathe. The butterfly flew around my head, and again the wing touched my left cheek. It had hovered for only a moment before it flew down and the fluttering wing brushed the hand that was resting on the railing of the deck. And then, it was gone.

I ran into the house and grabbed the phone. I called my oldest son. When he answered, I breathlessly asked him if he remembered “Angel Kisses.”

“Yeah, I do, Mom. You used to bat your eyelashes against our cheeks when we were little. You called them angel kisses. It made us laugh.”

“I am so glad you remember that,” I said to him. “I was kissed by an angel a couple of minutes ago, and I want to tell you about it…”

2 thoughts on “Kissed by an Angel”