Mystery in Alaska: The Yuletide Rescue

When it comes to search and rescue operations, nothing is as daunting as the landscape in Alaska. I know. My cousin has flown medical missions into remote areas of Alaska for years. That’s one of the reasons I chose Margaret Daley’s The Yuletide Rescue to read this week.

Dr. Aubrey (Bree) Mathison is picked up by pilot Jeremiah Elliot to take her home after a medical mission trip. Jeremiah took over the role of surrogate parent when her parents died. She thought nothing of his stop at a remote cabin in the woods of Alaska to deliver Christmas presents on their way back.

When a sudden heart attack strikes Jeremiah, they have no choice but to land on an open lake. Terrified when she’s unable to save Jeremiah, Bree takes the supplies she needs and burrows into the hillside to weather out the oncoming snow storm.

David Stone is a pilot with a past. Flying his plane over the wilderness that is Alaska, he spots the downed plane and sets out to save the occupants while the wolves are circling.

Neither the weather nor the threat of the heavily armed men in the white helicopter will thwart David’s attempt to get the beautiful doctor out of danger. Or, so, he thinks.

What was Jeremiah up to and how did he get a million dollars? Why did strangers trash his home? What were they looking for?

Things escalate when Bree’s friend suddenly disappears while driving Bree’s car. The chase is on. Time is running out, and Bree and David have no clue what they’re running from. Or, could they be running toward something?

“The Yuletide Rescue” is a fast-paced mystery involving two unlikely partners. Will David and Bree ever overcome the demons of the past and learn to trust again?

When Dr. Bree Mathison’s plane plummets into the Alaskan wilderness at Christmastime, her grief and panic are searing reminders of all she’s lost. With the pilot—her dear friend—dead and wolves circling, she struggles to survive.

Search and Rescue leader David Stone fights his way through the elements to save her. David suspects the plane crash might not have been an accident, spurring Bree’s sense that someone’s watching her. But why is anyone after her?

Suddenly Bree finds herself caught in the middle of a whirlwind of secrets during the holiday season. With everyone she cares about most in peril, Bree and her promised protector must battle the Alaskan tundra and vengeful criminals to make it to the New Year.

Alaskan Search and Rescue: Risking their lives to save the day

More From The Series 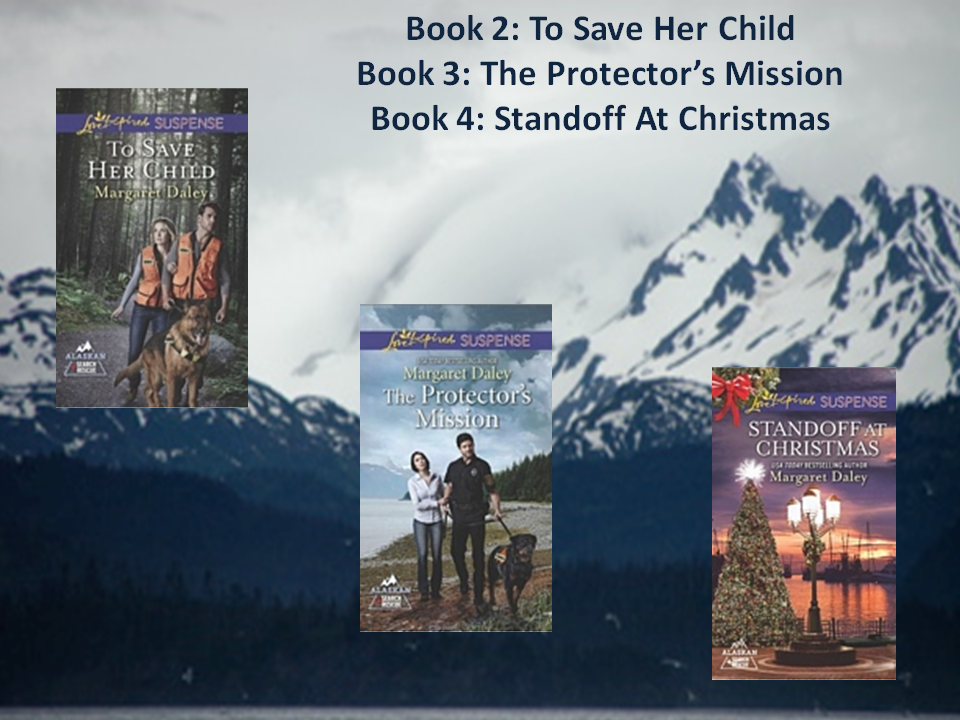 To Save Her Child (Alaskan Search and Rescue Book 2)

When a young boy goes missing from wilderness day camp, Alaskan search and rescue worker Josiah Witherspoon is on the case. The brooding ex-marine promises to find the child and return him to his worried mother.

But he doesn’t know that Ella Jackson has a secret past: A past that could put them all in danger. When tensions mount, Ella needs to tell Josiah the truth—but she can’t set aside her fears enough to trust him. Ella and Josiah are ready to risk their lives to save her son, but will they risk their hearts, as well?

Alaskan Search and Rescue: Risking their lives to save the day

Lydia McKenzie is the only living witness to a serial bomber’s latest threat. Surviving the explosion at the café, Lydia is rescued by police sergeant Jesse Hunt and his K-9 partner, a Rottweiler named Brutus.

She’s struggling to remember details of the incident. But one thing she’ll never forget is how she once felt about Jesse—the high school sweetheart she left to marry another. In charge of her protection, the guarded cop believes the bomber’s after her, and he promises to keep her safe. But as more of Lydia’s memories return, the more the vicious killer wants her dead.

Anchorage, Alaska K-9 officer Jake Nichols returns home for Christmas to recover from the accident that almost killed him—and find a little peace and quiet. But those plans are shattered when his childhood friend Rachel Hart gets caught up in a drug-smuggling ring after her aunt is brutally murdered.

Jake quickly discovers that Port Aurora is no longer the tranquil little fishing town he left behind. He promises Rachel that he’ll stick around until he tracks down the killer—and vows to protect her at all costs. Both of their lives are in peril as he battles against the Alaskan winter, a ruthless criminal…and his developing feelings for Rachel.

Margaret has been writing for over 35 years. She started writing in the late 1970s because she wanted to see if she could put a whole story down on paper. That book is still in the drawer and will never see the light of day. But she was able to finish a book, which was her goal.

She decided after that to get some help and joined a writers’ roundtable where she met once a week with some fellow writers who went over each other’s work.

Margaret sold her first book in the early 1980s and enjoys success still. She loves to tell a story. When Margaret was a little girl, she made up stories while playing with her dolls. She is the author of seventy-six books.

On long trips with her family, she would weave a story about the surrounding countryside. From those early beginnings grew a love of entertaining people with a story. She has sold nearly 5 million copies worldwide with over 90 books.

When she went away to college, she met her husband, Mike, to whom she has been married for over 40 years. He is her support and her best friend. She has always felt she was the luckiest woman the day she bumped into him on campus.

When they married, they moved to Tulsa, where she finished her degree in special education and began teaching. She loved teaching and working with students with special needs. They helped her remember what is essential in life.

She also participated in the Special Olympics as a coach with her students and has attended the State Games in May for years. Recently she retired from teaching to write full-time.

Besides teaching and writing, she is also a mother of one. Her son, Shaun, loves animals. There were times they felt they had a zoo at the house. The most interesting pet Shaun had is a leopard tortoise, which could outlive him. She has joked that his children will be inheriting a tortoise. He is married with four daughters.

When she isn’t working, she loves to read, travel, and go to lunch and a movie with a friend. She has been to many countries in the world and loves to meet new people. Her favorite place is Tahiti — Bora Bora. It is as beautiful as all the pictures portray it.

In her travels, she has found herself in some unusual situations.

Once, in London, she got caught in the middle of a protest that later turned into a riot over poll taxes.

In the rainforest of Costa Rica, she was covered from head to toe in mud and ruined a perfectly good outfit. She should have remembered it was going to be wet since it was called a rainforest.

You Can Connect With Margaret Daley Below