I’m delighted to welcome Author Wendy May Andrews as this Saturday’s Pick Author. Wendy loves to write sweet romance novels set in Regency-era England. What modern woman isn’t at some time in her life caught up in a Regency-era romance story? I know I have.

Wendy enjoys a love affair with words that started when she was only four or five-years old.  Her first novel, Tempting the Earl evolved on a dare from her husband.

Wendy May Andrews writes fiction, but all her Sweet Regency Romances find themselves situated in her beloved England. She lives in Toronto with her romantic hero and husband. The two of them love to travel and Wendy spends her free time exploring the green areas and trails in and around the city.

Sweet Surrender released 3/717 – Can a lost love be rekindled?

When Lady Julianna ended her engagement to Lord Ackerley, Viscount Beaumont, during her first Season, she left London vowing never to return.

Seven years later, she returns as chaperone to her niece and unfortunately, Lord Ackerley is also in town for the Season. Moving around the small circle of the town stirs up feelings she has kept hidden. Embarrassed and ashamed that she made a mistake in ending their previous relationship, she tries to avoid further conflict. Lord Ackerley, stunned by her second rejection, pursues her to discover the truth.

Is it ever too late for a second chance at love?

Julianna made a graceful curtsy and finally managed to raise her eyelashes and survey the room.

It was not playacting that caused her sudden intake of breath as she saw her old beau again. In fact, it took all the force of will she possessed to keep her reaction within bounds. At that first brief encounter, she had been too surprised to take in his splendour.

No one had told her the viscount had grown even more handsome in the ensuing years, the strength of his jawline more pronounced, and just the very slightest of gray at the temples in his nearly ebony hair.

Forcing her jaw not to drop open in shock, Julianna felt her stomach flutter with nerves as she gripped tightly to her friend’s hand and tried not to cause an ill-bred scene in Catherine’s parlor.

I’m reminded of the lines from Sinatra’s Second Time Around, “Love is lovelier, the second time around.” What prevented Lady Julianna from allowing herself to love again after leaving the first time? Surely there were men in her new city who noticed her.

Julianna didn’t end up in a new city, she went home to her brother’s estate and helped him raise his children after his wife died in childbirth. She has been preoccupied with the children for the last seven years. Besides having little or no access to eligible gentlemen in the ensuing years, her first attempt at love has left her a little jaded.

I’m like Julianna, and ran away; only to discover years later that I could have a second chance with my lost love. This has to be a common thread in many women’s lives. Was it difficult to write about a character who is willing to walk away from everything that matters?

I have a very active imagination so it wasn’t difficult at all. While I haven’t done anything quite as dramatic as Julianna, I have experienced a complete change of circumstances by moving far away from friends and family and needing to start fresh. It can be scary but exciting too.

Can you share your launch strategies with new authors?

I have been working at building my newsletter subscription list and trying to build up a following on social media by being social rather than being all about “buy my book”. It’s a long-term project rather than having immediate results. I also rely on the generosity of fellow authors to help with promotion.

The Duke Conspiracy is a book about the daughter of a baron diplomat, and her aversion to settling to be simply a dutiful wife after a stint in Vienna where she used her talents to spy. How much research do you do in the time period to make sure the characters are true to the beliefs of the setting?

I write primarily in the Regency era so over the years I have done a lot of research as well as read extensively in the genre. Thankfully it’s a popular time period so there are many resources to ensure accuracy. I have a couple books that I rely on for time appropriate expressions, as well as history books for specific, timing related facts.

Not from my own personal experience, but some of the friends I grew up with fell in love and married. So, I have witnessed this take place. It’s fascinating to watch the transformation. And it would be lovely to have all that history together.

The Countess Intrigue is about the dangers of becoming betrothed to someone not well known during the “Season.” For those not familiar with Regency Romances, can you explain what the “Season” is?

This is the social season that revolved around the sitting of the Lords in the House of Parliament. When the lords came to London, their families often accompanied them. Marriageable daughters of the aristocracy of the time are presented to the Queen and then launched into society in search of a husband. They had balls, routs, dinner parties, afternoon visits, walks in the park, and various other expeditions all arranged in the effort to match up said daughters with suitable mates as well as keep the aristocracy and gentry entertained.

In this book, Wendy May Andrews combines romance and mystery in a tale that will keep the reader engaged from the first to the last page. Wendy, have you ever written a mystery story outside of the Regency Romance books?

Not yet, but I would love to try someday.

What was the most challenging aspect of writing this story?

The Countess Intrigue was my first sequel to ever write. This brings unique challenges because you have to respect what has already been written in the first book, keeping in mind any character description that is already in existence or “facts” that need to be kept in mind. Also, I wanted it to be a stand alone, so I had to explain a few things about the first story without giving away any spoilers for anyone who hadn’t already read The Duke Conspiracy. But it was great to get to spend the extra time in that little world I had created. 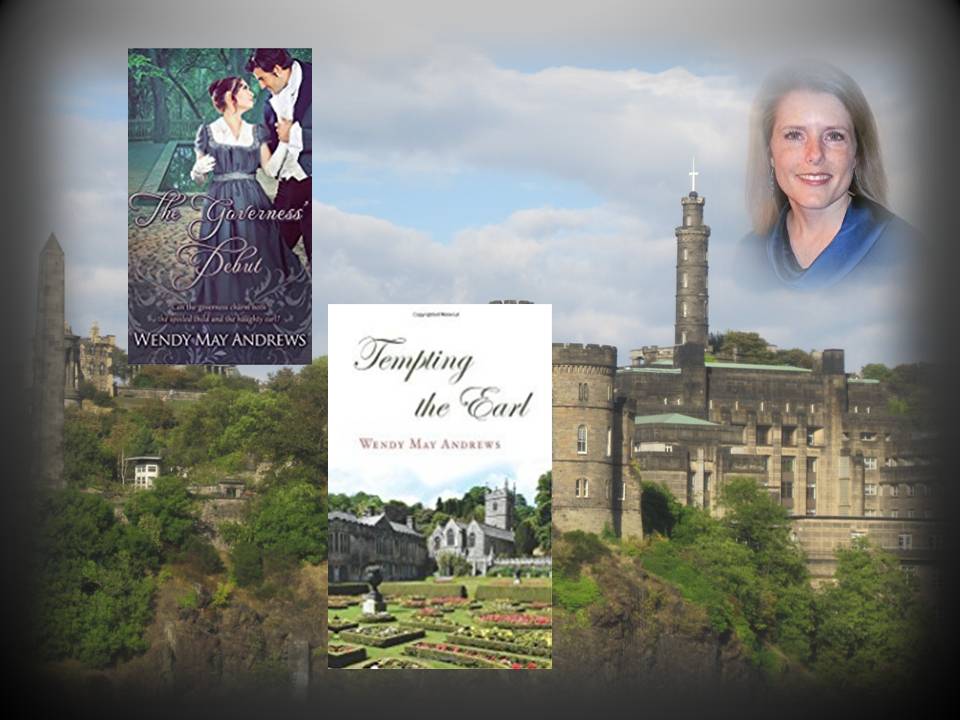 In The Governess’ Debut, Miss Scott comes from the elite of the area, but her inheritance is squandered by a brother who thinks only of himself. The only logical position to support herself comes in the form of a governess position with a young girl who has already destroyed three governesses. Can you describe Lord Astley’s daughter before Miss Scott becomes her new Governess?

She’s a spoiled brat on the one hand, but, really, she’s just a lonely girl who has lost her mother and is acting out in reaction to her circumstances. Miss Scott is too young to understand and no one has gone to the trouble of taking a firm hand with her.

What is it about Miss Scott that clicks with a little girl who’s lost her mother?

Felicia is an orphan so she can relate to Penelope. She doesn’t coddle the girl but she firmly sets some boundaries. In short, she “gets” what Penelope is going through and they hit it off.

The theme of Tempting the Earl, is the story of Emily, who is masquerading as the Earl’s servant. In the era of Regency Romance, how can a young woman be put in such a compromising position? (Not asking for any spoilers here.)

Obviously, it would be rare, but if you read the book, you’ll see that it’s plausible.

What makes the Earl’s love interest, Maude, not the right choice for the young earl?

She’s too cold. Maude is TOO appropriate. She only thinks about saying the right thing and acting like a future countess. I think she’s reformable and should get her own story one day but for now, she’s not right for Philip.

Did you do any special research for this particular story?

Yes! Tempting the Earl was my first book so REAMS of research was needed! Everything from location to setting, descriptions of the house and everyone’s clothes needed to be researched. 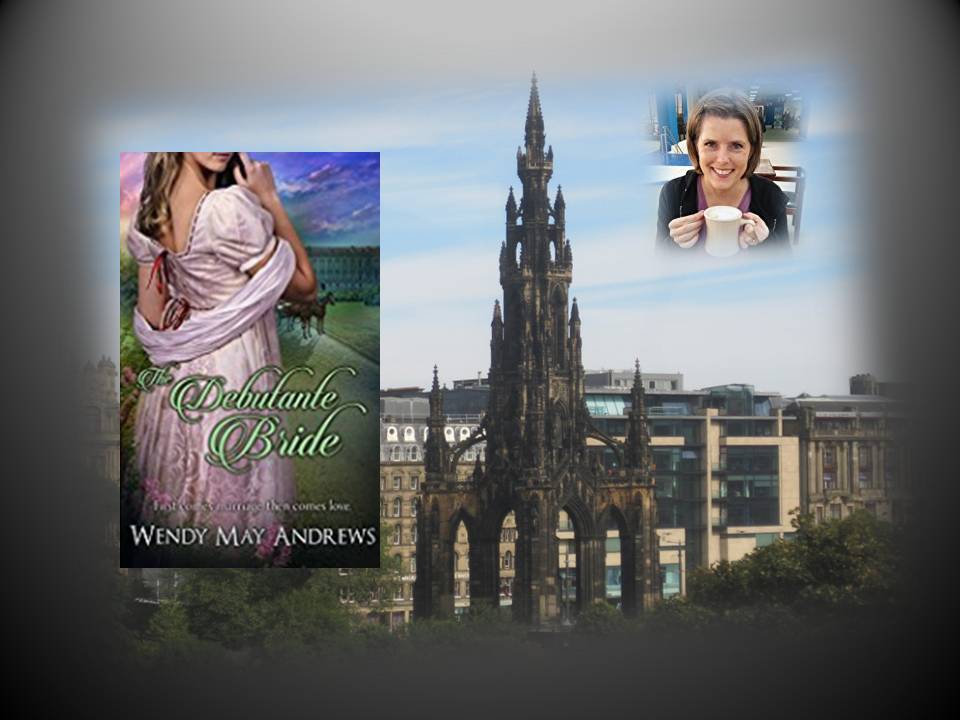 Miss Elizabeth Dunseith, Beth to her friends, grew up in genteel poverty, happy despite her abusive father and weak mother. When her father sells her to the highest bidder in order to pay off his gambling debts, she fears what her future will hold but is relieved to get away from home with her new, handsome husband.

Lord Justin Fulton, Earl of Westfield, is confused by the contradictory behavior of his purchased bride. One moment she is haughty and cool, the next she is warm and endearing. When his sister refuses to help establish his new bride in Society, Justin turns to a friend’s wife to show Beth the best way to navigate the politics of the town.

Their growing attraction just seems to confuse matters even further. Will these two be able to see past their differences to make it to happily ever after?

I apologize, Wendy May Andrews, but I wasn’t aware that brides could be bought and sold in England in those days. What can you share with us about this practice?

In a certain way, considering that dowries were usually involved as well as the enlarging of dynasties, marriage was a fairly commercial transaction in those days. It still is today, in some cultures!

If this book were to be made into a Hallmark movie, who would you want to play the character of Beth?

I think Kiera Knightly would do a fabulous job with Beth’s character.

How do modern women align with Beth’s character?

Obviously, in our modern age, no woman in the developed world would find herself in exactly Beth’s position. But many of us can relate to feeling like a fish out of water. And if anyone has had a difficult home life, you could relate to the challenges she faced or the motivations behind some of her choices.

If you could spend a month anywhere in the British Isles, where would you go and what would you do?

Oh! This is tough! I love everywhere I have seen thus far in the UK. But if I had a month, I would love to do a walking tour in the Cotswolds.

Which Regency Romance Authors do you enjoy reading?

My absolute favorite is Georgette Heyer. She was my inspiration for writing Regencies. But, I also enjoy Julia Quinn, especially her early stories. I love the humor in her books.

What’s one thing most readers don’t already know about Wendy May Andrews?

This is a hard question! I’m a fairly open book… That said, I guess I never, or rarely, talk about my brothers. I’m one of three siblings. You see, I’m the only girl in the middle of two brothers. They are fantastic, I love them dearly, but we are quite different from each other. Also, I’m the only writer in the family, but my younger brother IS an avid reader.

Thank you for joining us here today, readers and Wendy May Andrews. I really enjoyed getting to know more about you and your books and I know the readers have too.

Readers, you can connect with Wendy May Andrews at these sites: