As we prepare for the annual St Patrick’s Day Parades down on the Mississippi Coast, I’m proud to remember that an Irish immigrant fathered my grandmother. He arrived from Ireland on what the Irish refer to as a “Coffin Ship.” This little boy lost both of his parents on the long journey from Ireland to the dream of new life in the United States.

He didn’t know the date of his birthday because he was so young when his parents died. My great-grandfather remembered next to nothing of his parents. A cousin of his mother and father arrived on the same boat. Afterward, they took the child to Virginia, where they raised him as their own.

I often wonder about another cousin who made the same trip. Patrick Kennedy arrived in Boston in 1849. You are all familiar with his son, Joseph P. Kennedy, Sr., the man who fathered a candidate elected as President of the United States in 1960. Did they come on the same boat? He and my grandmother are close in age, and Rose Kennedy communicated with my grandmother. Does that mean the families lived close in Ireland or were they scattered across the suffering landscape?

The Irish Potato Famine is a period in our history of tremendous suffering for my Kennedy ancestors. Starvation became the leading cause of death. To stay in Ireland invited the diseases the people didn’t have the constitution to fight.

The height of the immigration movement from Ireland to the United States came, during the 1845-1852 period. At the time my Great-grandfather stepped aboard the Coffin Ship, unscrupulous landowners evicted an estimated half million Irish citizens from their small cottages.

Ireland, at that time, belonged to the United Kingdom of Great Britain and Ireland.

What I find fascinating is that the journey of the Coffin Ships could take anywhere between 40 days and three months. Historians attribute much of the difference in time to the skill of the captains and the quality of the boats.

By June of 1847, nearly 40 Coffin Ships lined up along the St. Lawrence River. The sheer numbers of patients overloaded the medical facilities here. They couldn’t get to all the people who contracted typhus on the trip over. The captains forced the Immigrants to stay in the holds of the ships, where lice carried the disease to those not yet ill.

Hundreds of bodies were tossed overboard into the St Lawrence River because the land of promise didn’t have the capability to address those afflicted with typhus and dysentery. I’ve often wondered if my Great-great-grandparents were dumped into the ocean or the St. Lawrence River. Those who perished are lost to us forever.

My great-grandfather was between four and five years old when he lived through the nightmare of the Potato Famine Migration to the United States of America. 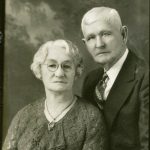 The Hope of a New Nation

This orphan grew up here in the United States and married. He had two daughters and four sons. One of his daughters was my grandmother.

Eunie Mae Kennedy was the daughter of the couple pictured. She became the inspiration for the Fiorin, Eunie Mae, in my Elle Burton series.

One of the most delightful things that happened during my author journey occurred when the first book, “Elle Burton and the Reflective Portals” was made into an audio book.

L.C. Kane produced the audio book for Audible. As I listened to the story unfold in another’s voice, I cried out in delight when the voice given to Eunie Mae had an Irish accent!

The beauty of this incredible land is that my grandmother married a boy who came from British parents. His ancestors were wealthy landowners in England and received one of the original land grants from the King of England. I descended from the poorest of the poor and the elite of England.

We celebrate St Patrick’s Day in America as we do every year. You’ll find green beer and green beads depending on what part of the country you visit.

It’s appropriate to honor people who suffered so much to come to this land. But, regardless of our heritage, we should celebrate the freedoms we have gained here in the United States.

I came from both poor immigrants and the elite who found favor with a King. Because of that, I am humbled each and every day to know that dreams can come true in this nation. ‘

We have built a country with the blood, sweat, and tears of generations who came before us. Therefore, we have a duty and a right to enjoy and protect the bounties of this place of dreams realized.

May you experience the Blessings of the Irish on this St Patrick’s Day, regardless of your country of origin. St Patrick’s words give us all hope for a future filled with the realization of our dreams.