You get a sense of a man with a great sense of humor when you read the following short biography about Steve Demaree.

Steve Demaree’s third-grade teacher wired him in his desk. In his sophomore year of high school, he climbed out the window to escape detention. Today, he sits in front of his computer murdering people, while his wife of forty-three years tries to raise him without much success. His daughter repeated her mother’s mistake and is currently trying to raise another mother’s son and two dogs. 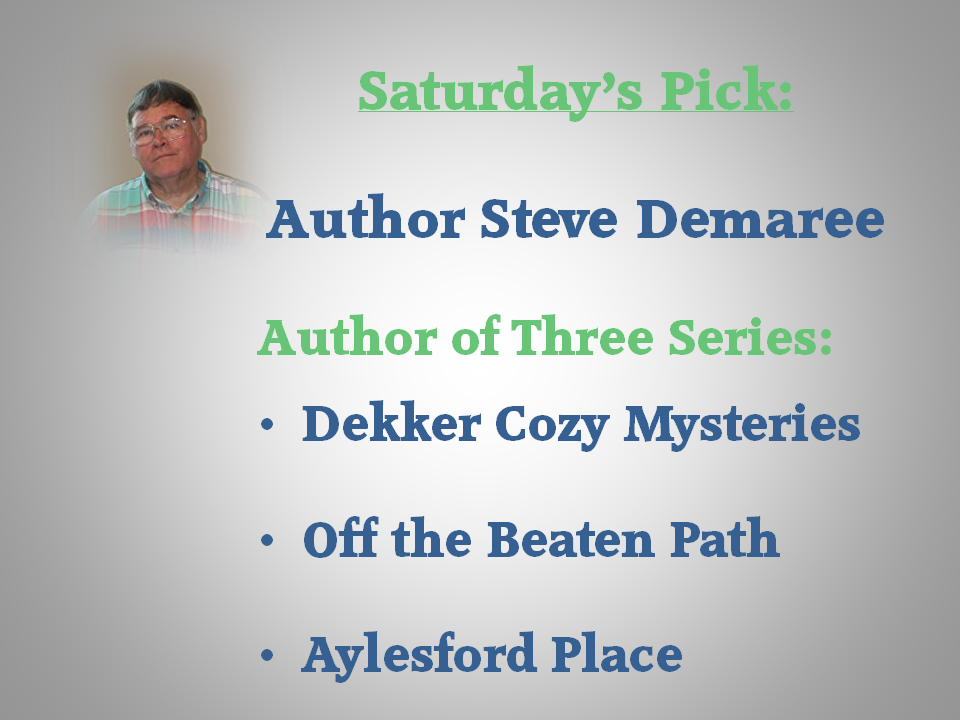 Steve, you grew up in Lexington, KY. I think I was only six or seven when we drove through your state, but I can still close my eyes and see bluegrass waving in the wind and the foothills in the distance. What is your favorite “Go-to Place” in Kentucky?

Well, I like going to The Cheesecake Factory, but I guess I’d say Mammoth Cave; although the last time I went there and went on the four-and-a-half hour tour, I was just hoping to get out of there alive. Everything seemed to be uphill, which doesn’t make a lot of sense in a cave.

One of your books describes life in Lexington, KY. What is one of your best memories of those times?

There are so many; going to the downtown movie theaters where you could stay all day for a quarter, reading my Hardy Boys books, playing baseball, writing letters to my pen pals all over the place and getting a note back in a few days.

Don’t tell anyone, Steve, but I couldn’t wait until my brother picked up his newest copy of the Hardy Boys! I loved those books.

Your Dekker Cozy Mystery Series is extremely popular. Are any of the characters a bit like you?

In most ways, Cy is either just like me or completely different than I am. We both love to eat and read mysteries, but I’m married, and he isn’t, I like sports, and he doesn’t, and I don’t have the evil next-door neighbor that he has in Heloise Humphert, but we both have a wonderful sense of humor. Like Cy, people have to go to therapy to forget me.

Are there any more books planned for the series?

Only if I want to keep eating. People who don’t know me love my books. I’m already working on the thirteenth book in that series and know what fourteen and fifteen will be about.

If you had to pick a favorite in the series, which book would it be and why?

Mine would be Murder in Gatlinburg (Book 7), but that’s because I love going to Gatlinburg on vacation. The one I recommend most is 52 Steps to Murder (Book 1). In my opinion, that one and Two Bodies in the Backyard (Book 11) are the two with the most humor, but Murder at the Art & Craft Fair (Book 6) may well have the funniest scene.  People seem to like these mysteries for four reasons. One, they love my characters. Two, they love the humor. Three, they love that my books have no profanity, sex, or gore. And four, they like the idea that they are hard to figure out whodunits.

How did you choose the settings for the books in the “Off the Beaten Path Mystery Series?”

Two of them take place outside of Lexington, KY, where I live. One of the others occurred in several places in Kentucky and was actually the first one I wrote. The other one takes place near our favorite vacation place, Gatlinburg, TN.

I’ve been in love with the Smokey Mountains since childhood. Why did you choose a cabin in the mountains as the backdrop for “A Smoky Mountain Mystery?”

I wrote it right after I wrote Murder in Gatlinburg, and I wanted to write two books that take place in that area which are distinctly different. My wife and I stayed in a cabin there once, so I thought that would be a perfect setting. Every book in the series takes place in some out-of-the-way place.

Which book in the series was the most fun to write?

A Smoky Mountain Mystery and Murder in the Dark. They were different from anything else I’d written at the time but were like some of the books I read.

Is there such a place as Aylesford Place?

Yes and no. It was named for my favorite street I lived on growing up, Aylesford Place. And that street consisted mostly of wonderful, older people.

No character in the book was based on any neighbor who lived on my street, but some were similar. I mention the people on the real Aylesford Place in my book Lexington & Me. I talk about some of those citizens in the book.

The real Aylesford Place was mostly three-story brick or siding homes, like the ones in the book. But, the street didn’t dead-end into a park, as it does in my book. Also, we didn’t celebrate all the well-known and little-known holidays they celebrate in the book.

I simply have to ask: Do you or your wife take part in paintball games?

No. That’s the one thing I wrote about that I have no knowledge of.

Tell us a little about this series.

There is enough bad in the world and other people’s books.

They go to the same church, which is on the street, and they celebrate most holidays together. There are some laugh-out-loud moments. One woman told me she laughed so hard she fell off her couch. It has touching moments. It has nostalgia. People who have read it tell me it’s the neighborhood they would love to live in.

You’ve written other books that are not in a series. How did you decide to write a devotional?

I’m a Christian. I had already written several books by this time. So, I wondered if I could write a devotional book that people of various denominations would like.

Also, I had heard about two men who read the complete Bible in three or four days. I’ve always enjoyed reading devotional books, like Guidepost. So, I took a few weeks and read the entire Bible.

Each time I came to a verse that I felt would make an appropriate addition for a devotional book, I jotted it down. I didn’t count them until the end, and when I did I had 373 verses.

Then I went back and reread it. If I felt that I had a good devotional for that verse, I wrote it. If not, I waited until I felt something that should go there. It’s the hardest book I ever wrote, but I think it’s my best. It took me a year-and-a-half to write it, while I wrote the first draft of the first Aylesford book in only eleven days.

Tell us a little about “Stories from the Heart.”

Stories From the Heart came about after I was in charge of a Thanksgiving dinner and program at our church. I felt I should be on the program too but somehow felt that if I were to sing or play a musical instrument, it would either drive people to pray or from the church. I wasn’t sure which.

So, I thought of writing something. I was a movie critic then but had never written a book. I think God got me out of bed in the middle of the night to write one story each night two nights in a row. I shared them at that church program, and they were well received. I continued to write them until I’d written several dozens. I came back from speaking at a Christian men’s weekend and felt God was telling me to start an e-mail ministry. I’d only had

Then, I came back from speaking at a Christian men’s weekend and felt God was telling me to start an e-mail ministry. I’d had an e-mail account for six weeks at that time and only had it because our daughter’s boyfriend’s dad told us we needed it. I didn’t do anything for two weeks, but since the feeling to do this ministry hadn’t gone away after two weeks, I sent out an e-mail with my testimony and three very short stories I’d written to

A Break From Writing

So, I didn’t do anything for two weeks. But since the feeling to do this ministry hadn’t gone away, I sent out an e-mail with my testimony and three very short stories I’d written to twenty-something guys whose e-mail address I had. I told them if they wanted any more they needed to let me know.

Ultimately, I figured a couple of them would ask for my stories, they would tire of them in a few weeks, and I would be finished writing them. I also asked them to share them with anyone they knew who might enjoy them or to send me e-mail addresses of anyone who might like them.

After six weeks, I’d heard from over 1,000 people who wanted to receive my stories. Those who identified themselves lived in 32 states and five other countries.

Being the lazy person I am, I was able to go out into all the world without leaving my computer chair.

After two months, I was hearing from 100-200 people a day. I found out what it was like to become a priest or Dear Abby because some wrote to confess their sins and some wrote to ask my advice. Also, I’m quick to say that no one who knew me personally did either. Anyway, a few years later, when I felt led to do so, some of these stories became my first book. I ended up writing three of these books before I wrote the first Aylesford Place book and my mysteries. But, they are not now available. I may make them e-books some day.

Thank you so much for sharing your thoughts and books with us today, Steve.

You can learn more about Steve Demaree and his books at these links: