Bokerah Brumley is a speculative fiction writer making stuff up on a trampoline in West Texas.

When she’s not playing with the quirky characters in her head, she’s addicted to Twitter pitch events, writing contests, and social media in general. She lives on ten permaculture acres with five home-educated children and one husband. In her imaginary spare time, she also serves as the blue-haired President of the Cisco Writers Club.

Lev is a whale shifter with a memory problem.

For the last one hundred sixty years, he has been unable to piece together what happened to his wife and son. Memory repression shouldn’t happen to whale shifters, but the case just won’t crack. When a mysterious woman knocks on his door and unloads a bombshell, Lev discovers that his son may still be alive… and it’s up to Lev to save him.

Woe’s ongoing obsession with hunting her husband’s murderer has left her mentally and emotionally exhausted. But when Lev asks for her help, Woe can’t tell him, no, and she agrees to take a temporary reprieve from her vendetta.

Together, they catch the first paranormal train out of the Big Apple and find themselves inside a hidden realm fraught with dangers beyond anything either of them has faced.

With lives hanging in the balance, Woe must learn how to let go of her painful past, even as Lev swears to drain the seven seas to recapture his.

*** A clean read free of graphic language and explicit sex. ***

Congratulations on the new release!!

Woe for a Faerie – Keepers of New York (Book 1): The Protagonist Woe, is ripped from the spiritual world and into the physical world with the loss of her beautiful black wings. How did you develop the challenges she would face before breaking free of her despair?

Thank you so much for having me, Peggy. It’s great to be here. 🙂

First, Woe has to learn to deal with the sensory information that pours in. I imagine life as an angel is rather different from life as a human. Woe meets a fellow and finds a purpose as part of a team, but on her terms. She learns to be independent, but also that family—blood or not—helps to fill the void.

One of the readers wrote this in their review: “B. Brumley’s writing seizes you right from the start and thrusts you into a paranormal world, throbbing with monsters and angels. At once luminous and dark, it will take you on a journey through the grittier parts of New York and beyond.” Which segments of New York did you highlight in this paranormal romance?

I focus a lot on Central Park and the surrounding area (Manhattan mostly). Also, I mention local landmarks and lesser known details about them throughout the series.

If you could pick the three primary characters to perform this as a movie, who would you choose and why?

Albert Finney or Rod Taylor would play Lev. I mention this in Leviathan’s Rise, but Lev reminds people a lot of Winston Churchill. It might be a weird choice for one of the main characters in a shifter novel, but it made sense to me. Lev’s back story ties into Moby Dick and Jonah’s Whale. He’s white whale when he’s shifted.

Lyndsy Fonseca could play Woe. I think she’d make a good one.

Ewan McGregor would make a good Jason, I think. He’d need a beard, but he could pull that off easily.

In the second book, Leviathan’s Rise: Keepers of New York (Book 2)  the whale shifter, Lev, has struggled for one hundred-sixty years to discover what happened to his wife and son. He suddenly learns his son is alive and needs his help. Then, he enlists Woe to accompany him on a paranormal train to a hidden realm fraught with dangers beyond anything either of them has faced before.  What do you believe are Lev’s strongest character traits and how do you blend them with Woe’s passions?

Lev is extremely loyal, and he likes to take care of those he loves. He also has a tendency to believe his first impression about a person, but he doesn’t jump to overreaction. After losing his family, this is amplified, and his desire for a family that can be his grows until his desire to believe good about others can be used against him. He believes the best about everyone he meets. It’s these character traits that get in into trouble in Leviathan’s Rise.

Are you planning a third book in the series?

Victory’s Kiss will be out by the end of 2017, I think. I also have a prequel planned that will tell the back story of the holographic The Librarian (you meet him in Woe for a Faerie and again in Leviathan’s Rise).

Agent Ordinary received Honorable Mention in the 2016 NYC Midnight 10th Annual Short Story Challenge. How did you become involved in the contest and would you recommend it to others?

I would recommend it to others that enjoy short story writing. Actually, I found the NYC Midnight Short Story Challenge last year while I was hunting for contests to enter. Deadlines keep me writing, and I was trying to work into a new habit of writing every day. I had a list of contests and anthologies that I wanted to submit to. It worked. I write almost every day now.

Which genre do you prefer writing in – Mystery or Paranormal?

So far, I’ve been writing in Science Fiction and Fantasy. Paranormal romance or fantasy romance or urban fantasy… My Keepers of New York series is all of those things. Although, I haven’t tried mystery yet. I think I’m going to try writing a contemporary romance soon, just to shake things up and give my brain a break from hanging out in Manhattan.

Feather (The Hotel Paranormal) is also a novel with Manhattan as the background. A very plain Jane Jones, a peacock shifter, discovers she’s the target of an assassin when all she wanted to do was have a relaxing vacation. What makes Jane unique as a peacock shifter?

Well, The Hotel Paranormal is not in Manhattan. It’s in a “side reality” that’s attached to ours but not in ours. While Jane Jones’ story begins in Manhattan (she’s a character from my Keepers of New York series), it continues to the hotel.

Does Jane have an ally at the hotel for paranormals traveling in the Big Apple?

The Hotel Paranormal is an interesting place. There have been many stories written in that location by many different authors. If you like paranormal romance, check it out.

The Hotel Paranormal is the place for supernatural beings looking to get away from it all. Beings like werewolves, vampires, elves, sprites, djinn and more check in from all over the world for business and pleasure — and sometimes for both.

Welcome to The Hotel Paranormal… 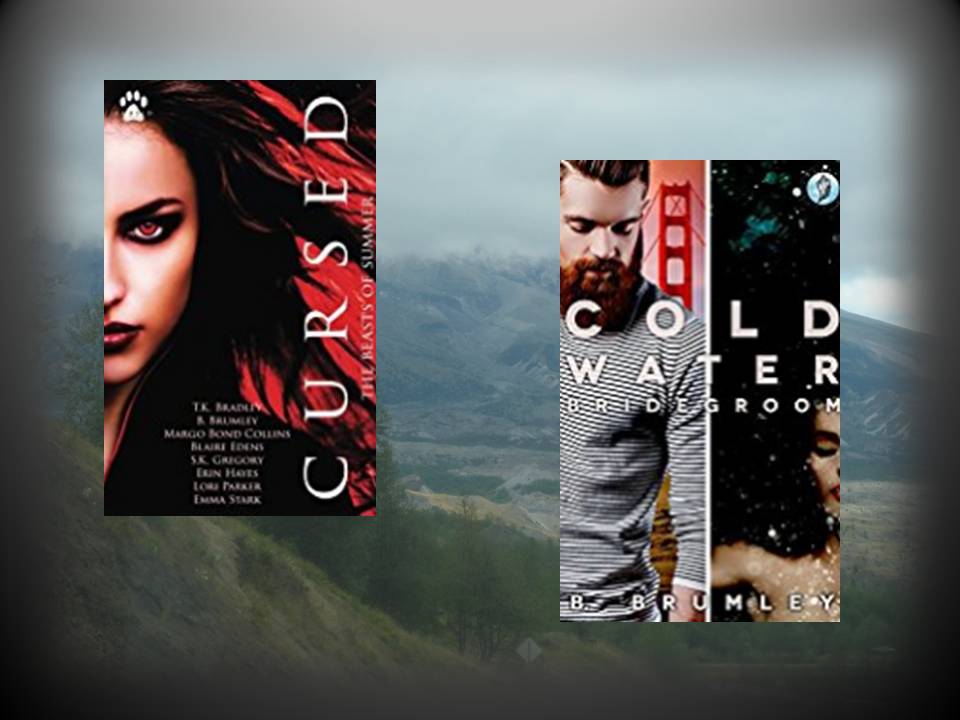 In the Anthology, Cursed, you bring Woe back. Woe is not only trying to face life without her precious wings, but is also worried about meeting her new in-laws. How does Father Jason fit into this tale?

The Cursed anthology contains the second novella that you’ll read in Woe for a Faerie. Woe for a Faerie is Woe’s story split into two novellas. For reader ease, I put them together and released it for free. I knew Leviathan’s Rise and Victory’s Kiss would each be a novel length, so it seemed like the best way to include Woe’s part of the story in my series.

Cold Water Bridegroom: Fins & Scales #1  This novel features an artist named Calder Brumen who has a fascination with all things of the sea, but most especially a dark haired mermaid named Gaire. It appears Bokerah Brumley has a fascination with mermaids too. How did you research a creature which lives beneath the waves?

I researched oceans, old legends, and myths about mermaids and water creatures. The stories have been around for a long time. It’s quite fascinating to read them all and then create my spin on it.

How many books are you planning in this series?

Fins & Scales will probably be a trilogy of novellas. The next one, Mermaid in Vegas, will be about Calder’s mom. She’s trapped in Vegas and forced to perform in a mermaid tank at a casino. I’ll probably make the third one about one of the twin-sister mermaids that appears in Cold Water Bridegroom.

Will Gaire and Calder play a role in Bokerah Brumley’s next book?

Oh, definitely. They have to save Calder’s mom. They probably will play a lesser role in the third novella, though.

If you could live as a shifter for one year, what would you choose and where would you live?

If I could live as a shifter for a year… Well, if you know me, you know I love peacocks. I might like to try that for a year if I could, but I’d live at home. We have a twenty-acre permaculture farm that we’re building in West Texas (I blog about it from time to time). I’d stay there. It’s our piece of heaven.

What books do you enjoy reading and who are your favorite authors?

Tell us one thing no one knows about Bokerah Brumley.

I’m nearly the only person on Google with my name. There are two other baby girls that have been named after me, but most of what pops up in Google is all me. (:

Thank you for joining us here today! We can’t wait for the next book to be released. Please come back and tell us all about it.

You Can Connect with Bokerah Brumley Here