This week’s Saturday’s Pick is Arthur Daigle who grew up in the suburbs of Chicago, Illinois, a short drive on I80 from where I grew up in Iowa. He’s a man who could have helped me immensely in life had I known him earlier because he has a degree in biology from the University of Illinois Urbana-Champaign. (It was not my best subject, but I did learn how to dissect a frog efficiently!)

Arthur Daigle followed his heart and became a zoo intern at the Brookfield Zoo, an assistant fisheries biologist at the Max McGraw Wildlife Foundation, and a research assistant at Morton Arboretum. (Again, his background would have been infinitely critical when I began a journey to figure out why the green scum on my lake was killing the wildlife and causing me to have massive asthma attacks after we bought our lake home in Wisconsin!)

He has been employed grading high school essay tests and as a garden associate most recently due to the job market that tends to ignore mature and seasoned workers today. In his spare time, he loves to write and is an avid gardener and amateur artist.

Arthur Daigle is the Author of Four Books:

William Bradshaw King of the Goblins, William Bradshaw and a Faint Hope, William Bradshaw and War Unending, and Goblin Stories. These books were almost inevitable given that the author has been a fan of science fiction and fantasy since he was old enough to walk. Major influences include the works of the puppeteer and filmmaker Jim Henson and the British artist Brian Froud. Expect more books in the Will Bradshaw series, as according to those who know him, all attempts to stop Arthur from writing have failed.

#1. Events in my childhood inspired much of my writing. So tell me, did you have dreams of goblins in the closet or did you just really love all the fantasy books in the library?

I was always a fan of science fiction and fantasy, but what inspired to write goblin stories was the work of Jim Henson and Brian Froud.  Together they made a movie called Labyrinth, which depicted goblins as comical, dirty and mischievous.  I loved the film and decided to make my goblins even more dysfunctional.

#2. If you had to pick another hero who is like William Bradshaw, who would it be and why?

I intended Will to be the common guy stuck in bizarre situations that should be beyond his ability to survive, much less defeat.  He’s not very strong, fast, smart or experienced, but he is stubborn and sees the best in others.  As such I wouldn’t compare him to a hero so much as to men who find themselves in tough situations and take a stand.

#3. Please describe the average goblin and how they interact with William.

Goblins, as a rule, are short, stupid and mildly crazy.  They can eat anything that was alive in the last century, including dirt.  Goblin skin colors run the rainbow and are something they don’t notice or care about.  They wear rags or cobbled together outfits.  Most goblins are poor and plan on staying that way because they know larger and stronger races won’t hesitate to rob them if they have money.

For the same reasons, goblins live in shacks, caves, and ruins far from larger races.  They view these homes as temporary and easily abandoned should attackers come.  When disaster strikes, armies invade or the creek rises, they pull up stakes and move on.  They also consider sewers a valid housing option, so cities are often infested with goblins.

Setting traps is a favorite goblin pastime.  These include pie throwers, pit traps, snares and traps that release live animals such as skunks.  They don’t much care who they catch in their traps, and neighboring goblins are considered valid victims along with enemies.

Goblins don’t understand the concept of a grudge.  They figure they can’t change the past, so there’s no point in worrying about it.  Once the sun sets they think all is forgiven, regardless of what you do to them or they do to you.

I chuckled as I read the first chapter of William Bradshaw and a Faint Hope. Here’s an excerpt from the book:

“You’re sure you want to do this?  Robbing a king is a bad career move.”

The highwayman laughed.  “You said it yourself, you’re the King of the Goblins. Those dirty little things aren’t much of a threat.”

“If there’s only one of them then you’re right, they’re normally not a threat,” Will conceded.  “But they do have two things going for them.”

Curious, the highwayman asked, “What’s that?”

“They’re very quiet when they want to be,” Will said as a mob of thirty goblins dressed in rags or miniature WW I German infantry uniforms poured out of the tall grass and ran at the highwayman.  “And there’s never only one goblin.”

#4. Kids love humor, so where did you find yours?

I found humor in lots of places.  When I was young, I watched Monty Python’s Flying Circus, Dave Allen at Large and Doctor Who on the local PBS station.  I also enjoyed the Muppets and many authors of comedy novels, such as Robert Aspirin, Douglas Adams, Aaron Williams and more.

#5. If there is one lesson you would like readers to remember when they close the back cover of this book, what would it be?

Too many men and women in the real world start life with two strikes already against them.  Give them an honest chance to make something of themselves. 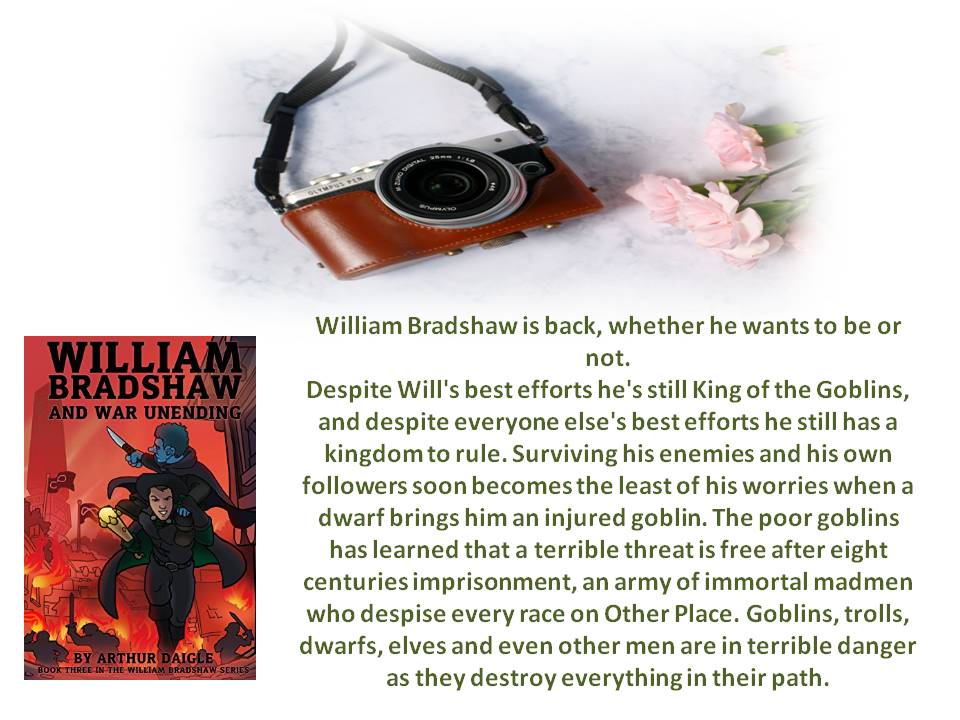 Stopping this nightmarish danger is more than Will is capable of even with the help of his goblins, troll bodyguards, magic mirror and fire scepter. But Will’s never let the odds stop him before, and he’s going to fight these monsters head on. He’s going to need help from new friends and old enemies to face a threat that not even eight hundred years can defeat.

There’s just one problem: how do you beat men who can’t die?

#6. William Bradshaw and War Unending places Will in a pretty tough place. How does he use the fire scepter to protect his friends and himself?

Will’s fire scepter is defective, just like everything else in the kingdom.  It’s supposed to have three settings, flashlight, torch or flamethrower.  The salamander living in the scepter thinks this is bunk and only generates massive fires hot enough to melt steel.  This makes using it tricky, as it could easily hurt friends and innocent bystanders.  William sidesteps that problem by only turning it on when he won’t hit anything but the intended target (very hard to do), and when that fails he clubs people with it.

#7. Which goblin is the most endearing to the readers and why?

I think the most loved goblin is Mr. Niff, who thinks he’s a hero and is totally oblivious to any facts to the contrary.  Mr. Niff once rescued a lost girl and brought her home, and ever since he’s been trying to save the day.  That’s a tall order for a short goblin, but Mr. Niff is an expert knife fighter and born survivor.  He’s also a trophy taker and is personally responsible for most of the useless junk in the goblin treasury (which is filled with junk).

#8. Does Arthur Daigle see himself in any of the characters?

No, but I’m told by people who know me I put a lot of myself into Will Bradshaw.

#9. Please describe the primary setting you were in as you wrote the third book in the series and your writing discipline.

The location where I write changes over time.  I’ve used a back bedroom, a table in the basement and now write on my bed.  I don’t ascribe anything special, as long as it’s quiet.  Book three was written in the back bedroom on an old iMac that is now sadly broken and recycled.

My writing discipline is undisciplined.  I start writing by taking long walks.  However, I bring no company, phone or music, just a bag for collecting recyclables.  I find these walks not only relaxing but help me come up with new ideas.  These are like movies scenes running in my head, each scene the equivalent of 10 seconds to five minutes of screen time.  I keep doing this until I have enough scenes envisioned and then mentally stitch them into a book.  Once that’s done I sit down and write.  I come up with a few jokes and ideas while I write, but this accounts for only 10% of my writing. Typically, I can finish a chapter a week, roughly five thousand words.  That’s not much, I know, but I have other obligations, including a day job. 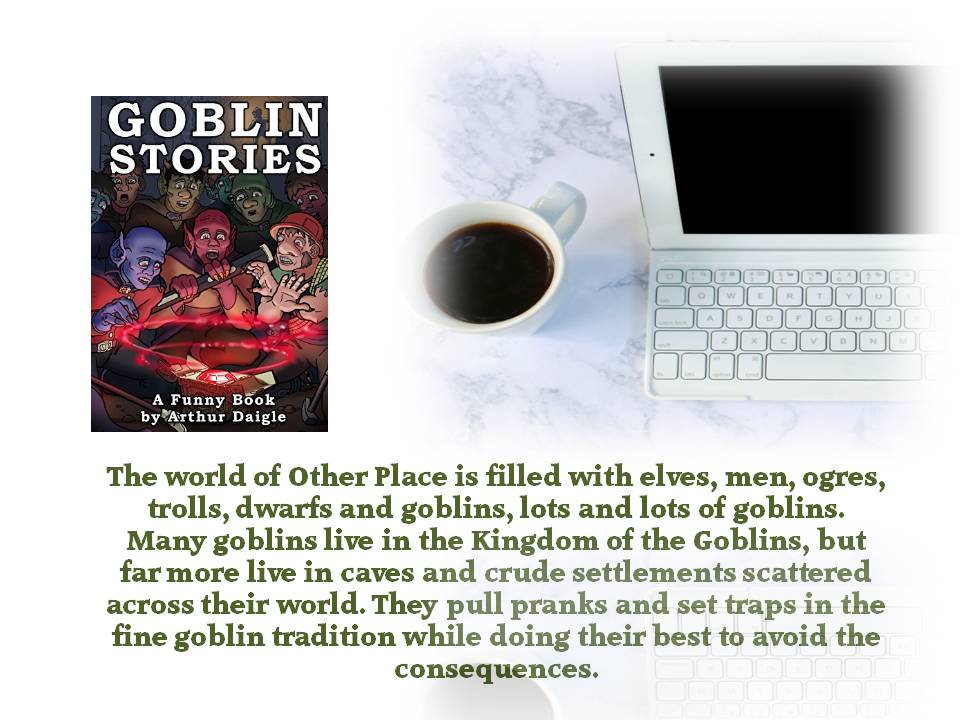 Goblins Are A Bit Crazy

At times goblins get caught up in wars, revolutions, and disasters. They run in fear from such events, as goblins know being brave often leads to being dead, but sometimes they can’t get away fast enough. Small, weak, stupid and just a bit crazy, they should be crushed underfoot when this happens…except they’re not.

They are facing an army of criminals and thieves, but the goblins aren’t running. Instead, they find friends to stand with them, be they revolutionaries, holy men, wizards or heroes. They steal powerful weapons that can tip the balance in their favor. Strangest of all, they set traps big enough to catch armies. Goblins are standing up for themselves and their friends, and Other Place will never be the same.

#10. How does Goblin Stories teach kids that befriending those who are weaker and not like us can make everyone a bit stronger?

Goblins are the lowest of the low, and have been convinced by centuries of hardships that they will lose.  Will leads them to victory in large part because he believes in them when they don’t believe in themselves.  They had the strength all along, but lacked his convictions, and when they have a leader who cares about them they’re able to go that extra mile.

#11. What tips the balance of power in Other Place?

Other Place has many magic items made by dwarfs.  Most of these items are buggy and unpredictable (dwarf standards have slipped since they went corporate), but there are fifty weapons of massive power and abilities.  Some are missing, others picky about who uses them, and a couple are downright homicidal, but if you have one you’re nearly unstoppable.  The Bottle of Hope in book two is one such an item that Will learns is in his kingdom.  The problem with having something everyone wants is people are willing to kill to get it, and Will has to worry about thieves, adventurers, wizards and armies coming for the bottle.

#12. What would you like to tell readers about this wonderful and fun series?

The book wasn’t written with children in mind.  I just wrote the kind of book I wish I could find in bookstores or libraries.  I’ve learned that kids 12-13 years old have liked it, as have college students, people in their forties and senior citizens.  So I can make you laugh whether you’re young or old.

Thank you, Arthur Daigle, for joining us today. I can’t wait to purchase the books for my grandson!

You can connect with Author Arthur Daigle by clicking the links below: