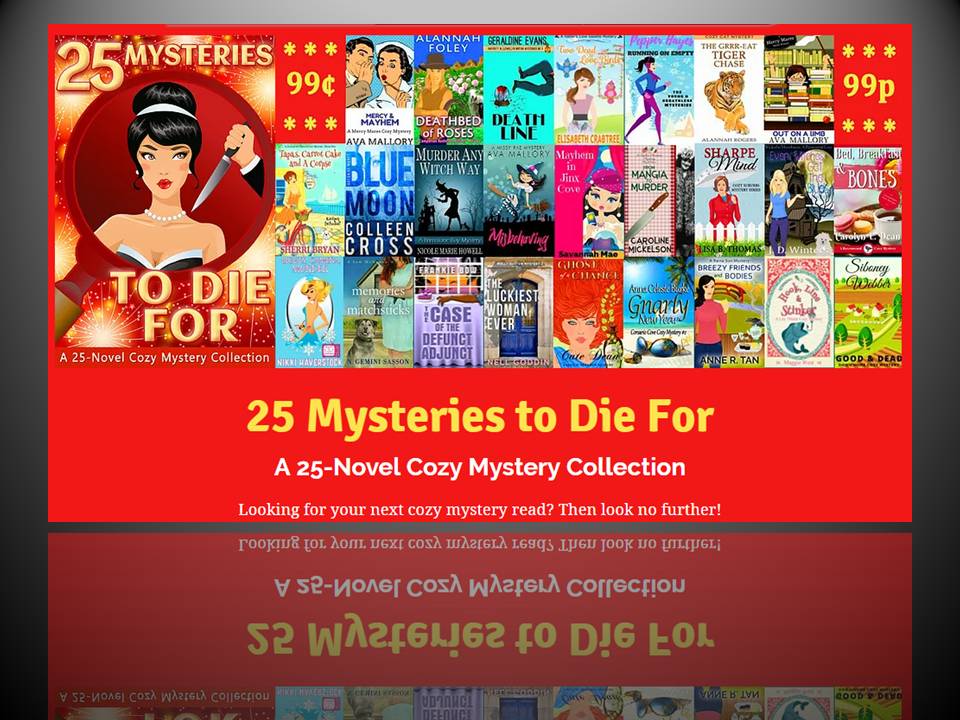 What better way to begin the Saturday’s Pick segment for 2017 than with 25 Mysteries to take you through the cold winter evenings of January? So, I went to one of the authors to explore how this collection came together. Normally, I feature only one author on the Saturday’s Pick, but I couldn’t let this amazing opportunity to pick up this incredible offer! So, I contacted Frankie Bow to tell you about her books and this special collection of cozy mysteries.

I’d like you all to welcome author Frankie Bow to my website today. Frankie joined with twenty-four other authors to produce 25 Mysteries to Die For. Frankie Bow graduated from the University of Southern California and currently works at Hawaiian Heritage Press and Kindle Press. One of her classic quotes: “I kill people for fun. In books.”

Like Molly Barda, Frankie Bow teaches at a public university. Unlike her protagonist, she is blessed with delightful students, sane colleagues, and a perfectly nice office chair. She believes if life isn’t fair, at least it can be entertaining.

In addition to writing murder mysteries, she publishes in schIolarly journals under her real name. Her experience with academic publishing has taught her to take nothing personally. 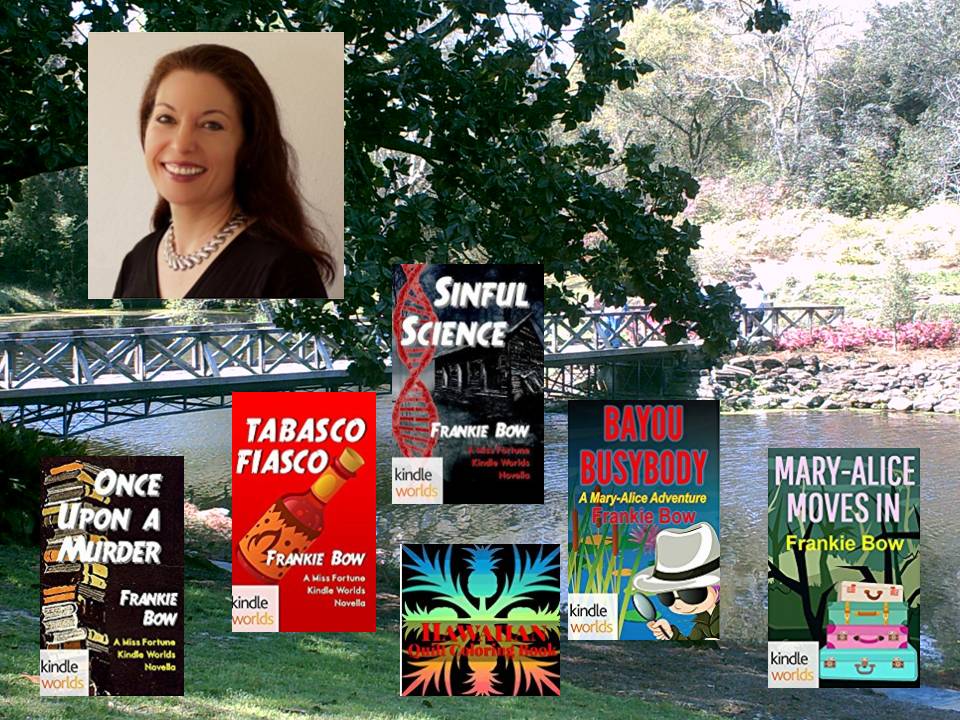 Frankie, before we talk about the mystery collection, can you tell us what your first book was and why you began writing mysteries?

I was exercising on the elliptical machine, reading a popular cozy mystery, and found myself underwhelmed with the humor. I thought, “I could write something funnier than this.” I stepped off the elliptical, went to my computer, and started writing. That became The Musubi Murder. I don’t mean to say that I’m better than a bestselling author, just that humor is very subjective.

I love the concept of the “Miss Fortune” series. Why did you decide to make Mary Alice a lead character too?

Jana DeLeon’s Miss Fortune series is so much fun both to read and to write in—it’s been described as “Miss Congeniality meets Golden Girls,” which I think is really spot-on. Her septuagenarian spies, Gertie and Ida Belle, have an archenemy, Celia Arceneaux, who is a horrible human being. I thought it would be funny to give Celia a cousin who was her exact opposite. Mary-Alice Arceneaux is sweet, quiet, and optimistic to the point of being Pollyanna-ish—yet she has her own dark secret.

Which antagonist in your novels do you love to hate?

I like writing Davison Gonsalves because he gets on Professor Molly’s nerves so much. We first meet him as an unrepentant cheater in her Intro to Business Management class. Later, she meets and hits it off with his father Donnie, and then faces the appalling prospect of having the entitled Davison as her stepson.

The other antagonist that’s fun to write is the Mahina State University Student Retention Office. The SRO wants every student to get passing grades so that the “success” numbers can look good in their annual reports to the Foundation that funds them; Molly wants to make sure her students actually learn something before they pass her class. This makes her Public Enemy Number One as far as the SRO is concerned. 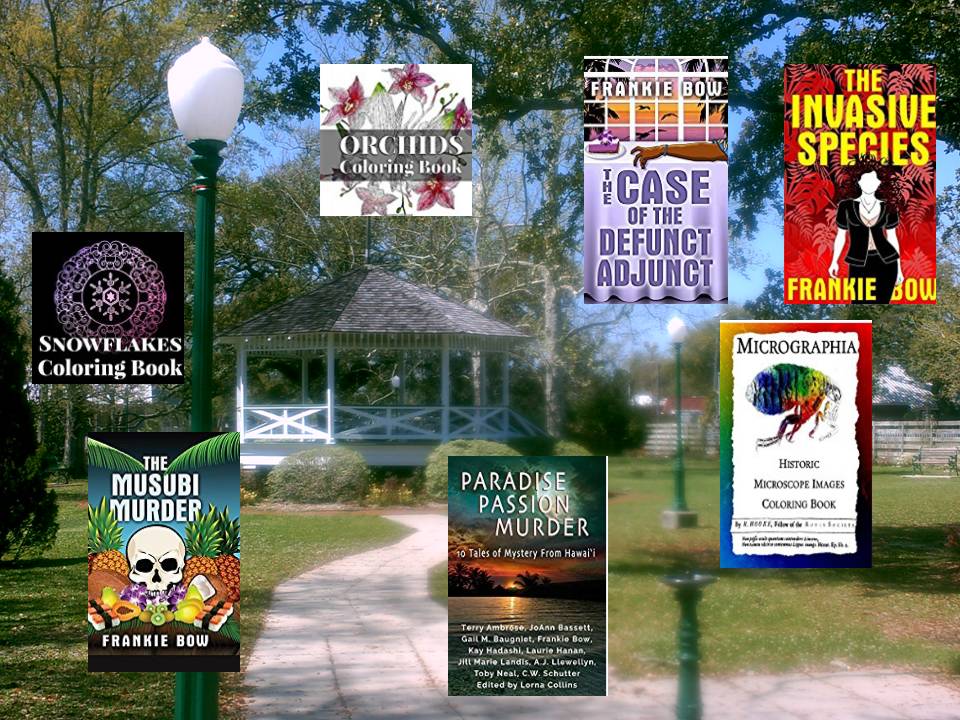 You collaborated with twenty-four other authors to create “25 Cozy Mysteries to Die For.” When did you all begin to put the project together?

25 Mysteries to Die For was the brainchild of Ava Mallory, a mystery author, and all-around genius. As the authors signed on, Ava and fellow mystery author Alannah Foley, who is a saint and a superhero, coordinated all of the details—advertising, cover art, formatting, distribution. There’s a lot that goes into a project like this, and I am delighted and honored to be part of it.

What kind of readers do you hope to reach?

Before I introduce the other authors, can you tell us if you have any favorites?

I really like the short story Trust Fall, as it starts in a setting many of us are all too familiar with: The all-day work retreat. The Trust Fall is that exercise where one person stands on a chair and falls into the crowd, and their coworkers are supposed to catch them. (Trust Fall is free right now in all formats, by the way; to pick up your copy Click Here

The List of Authors and their 25 Mysteries released December 27, 2016:

Romance, obsession, and murder are in the news when intrepid reporter, Kat Archer, becomes one of psychic matchmaker Ashley Byrd’s clients

CATE DEAN – Ghost of a Chance

Welcome to Holmestead, England ~ where an American ex-pat, an archaeologist, and murder turn this picture postcard village upside down.

Can fifth-grade teacher Lily Thistle solve a murder her first day of school in her new seaside town?

When a 500-pound Siberian tiger is stolen from a roadside attraction near the small town of Ashbrook, New Hampshire, it’s up to amateur sleuth Beatrice Young and her three crime-fighting cats to solve the case.

Jasper Moon, a seer who failed to foretell his own murder, involves DI Joe Rafferty in a tangled web of deceit.

When a paranormal festival comes to Brimstone Bay and a dead body is found in the haunted house, clever witch River Halloway must find the killer before the local witches are falsely accused of murder.

Kim and Brien’s most excellent honeymoon adventure gets gnarly when murder and mayhem arrive along with an unwelcome visitor on New Year’s Eve.

CAROLINE MICKELSON – From Mangia to Murder

The grand opening of the Mancini Private Detective Agency is ruined when a party filled with family, friends, and food aplenty turns fatal, and the word on everyone’s lips went from mangia to murder.

When Raina Sun loses her grandfather’s journal in a mugging incident and a family friend dies under mysterious circumstances during Chinese New Year, she is drawn into another murder investigation where family secrets don’t die with the dead.

Amanda Graham inherited a rundown bed and breakfast, a starving cat, and some dead guy who’s buried in her garden!

When dashing celebrity gardener, Simon Sinclair, is found dead on the Barrington-Bowles manor estate, Scott winds up a suspect. But was it the infamous Lakes Killer, or was the man’s murderer a lot closer to home?

A cranky octogenarian. A suspicious death. A paranormal twist that will change everything.

Melanie had it all until a troubling turn of events threatens to take it all away.

FRANKIE BOW – The Case of the Defunct Adjunct

Forced to attend the Student Retention Office’s summer retreat, Professor Molly brings her game of buzzword bingo to fend off boredom. But when a serial harasser collapses face-first into his haupia cheesecake, the event goes from dull to disastrous.

When a handsome stranger to the bustling coastal town of St. Eves meets an untimely end, a reluctant amateur sleuth uncovers a shocking secret that rocks the close-knit community to its core.

J D WINTERS – Even Witches Get the Blues

A psychic, a magician and a dead body can only mean one thing–Deena Sharpe has a mystery to solve.

There’s an arsonist on the loose in rural Wilton, Indiana.

Nell Goddin – The Luckiest Woman Ever

Expat amateur sleuth Molly Sutton digs into the long-hidden past to try to nail a murderer in her adopted France.

You can connect with Frankie Bow at these sites: