The Football Team Can Do No Wrong – 6 Tips on Intimidation

The Tough Guys Are Groomed for Intimidation

All you had to do when I was young was to attend a hockey or football game and watch to see which parents were screaming at their kids on the field to get a pretty good idea of which players were responsible for the intimidation of their peers on the playground.

Kids have an incredible tendency to perform like their parents do so that the worst habits are the ones our children are doomed to pick up. Scream at your kid from the sidelines to lambast someone on the field and they are just as likely to do it on the sidelines.

My son was expected to take on two to five other boys if he wanted the taunts and jabs to stop on the way home from school. Things only got worse by the time he entered fourth grade and signed up for football for the first time.

His biggest hurdle was the fact that his father had never participated in any sport. He hated sports, making it impossible for the boys to learn easily about which sporting events they might enjoy.

I came home from work one afternoon and found my oldest sitting on a rather high branch on a tree in our yard. It was evident he’d been crying, so I asked him why he was sitting in the tree.

“I’m trying to get the courage to fall out of this dumb tree, so I can break my arm and get out of football!”

I was astonished he hadn’t come to me to beg out of the sport.

When I questioned my son about football terms that afternoon, he didn’t even know what a 1st & ten meant.

Give A Child The Right Tools

All he knew for sure was that he was supposed to stop the guy in the line in front of him from getting anywhere. The intimidation he was experiencing from his coach had totally broken his spirit.

That was the only thing he knew about the sport of football. He was in the fourth grade.

I showed up to practice that afternoon without my son. I talked to the coach. He was a player for the Vikings Football Team. He was intimidating, to say the least; a hero to every man and boy in the state of Minnesota.

I explained that my child would not be allowed to participate any longer because I had misgivings on his instruction in how to play the game and in sportsmanship. I tried to be incredibly polite in my tone, but his face did turn red as I spoke.

I rather doubt the man cared about anything other than his son, whom he was grooming at the expense of all the other little boys on the field. His son was accused of a serious bullying event when he was in high school. Fathers influence their young sons.

Children need to understand intimidation so they can identify what constitutes a threat. 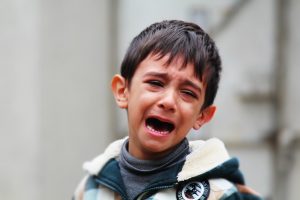 They need to be able to talk about it. When you discuss bullying, you will help them address any problems they may be having. Offer suggestions on how to respond appropriately if they are experiencing bullying.

Here’s a list of questions you can ask your child:

Start a conversation using these questions:

The above is by no means a complete list. You can formulate additional questions that address the situations your children may encounter. The point is: You need to start the discussion.

Whether your child has been a victim of bullying, is the bully, or has witnessed bullying without intervening, you cannot depend on the school system alone to stop the behavior.

Understand the Issues in Your School

During a normal conversation, ask your child to define bullying.

Now is the time to engage them in discussions about how they feel when they see someone bullied.

Ask them who they will go to for help. Determine what they want you to do if they become a victim. Be sure to ask them whether they feel leaving someone out is a form of bullying, so they understand there are many different forms of bullying.

There are no perfect answers when your child is the victim. My son struggled daily with a group of boys who ganged up on him. The school refused to do anything to protect my child.

We were still trying to figure out what we could do to help when the group of boys engaged him in my front yard.

Seething inside, I remained calm as I walked out the front door. I smiled and told them if they needed to find out who was the strongest I could referee while they took turns testing my son one-at-a-time.

The Reaction Was Expected

They all stood silent, as I explained that it was rather cowardly to be afraid to fight my son one at a time.

They all headed home, but one of the boys turned and called me a curse word.

Their disrespect for me became the primary incentive for my child to demand the others stop taunting him. My son continued to stand his ground after that day, and the bullying finally ended.

Far too many children keep the fact that they are being bullied a secret from their parents. They are one of the statistics of teen suicide. Don’t let that happen! Be proactive and talk to your kids today.

I try to remain neutral when it comes to publicly commenting on anything political. With that in mind, I still can’t ignore the message we are sending to our youth and young adults over the past few months:

One thing you need to remember in the coming months is that it doesn’t matter whether you laugh, jeer, sneer, or applaud Donald Trump’s antics on the evening news, you are making an impression on your kid’s attitude toward bullying.

You can find the discussion sheet for the Elle Burton book here. It has some questions about bullying you might be able to use in your conversations around the dinner table.