It’s Saturday, and a new Indie Author is ready to share more about herself and her books.  These books are safe recommendations for those ages 12+ who want to read books containing minimal bad language and no sexually explicit scenes. My guest today is author Diane Rapp. 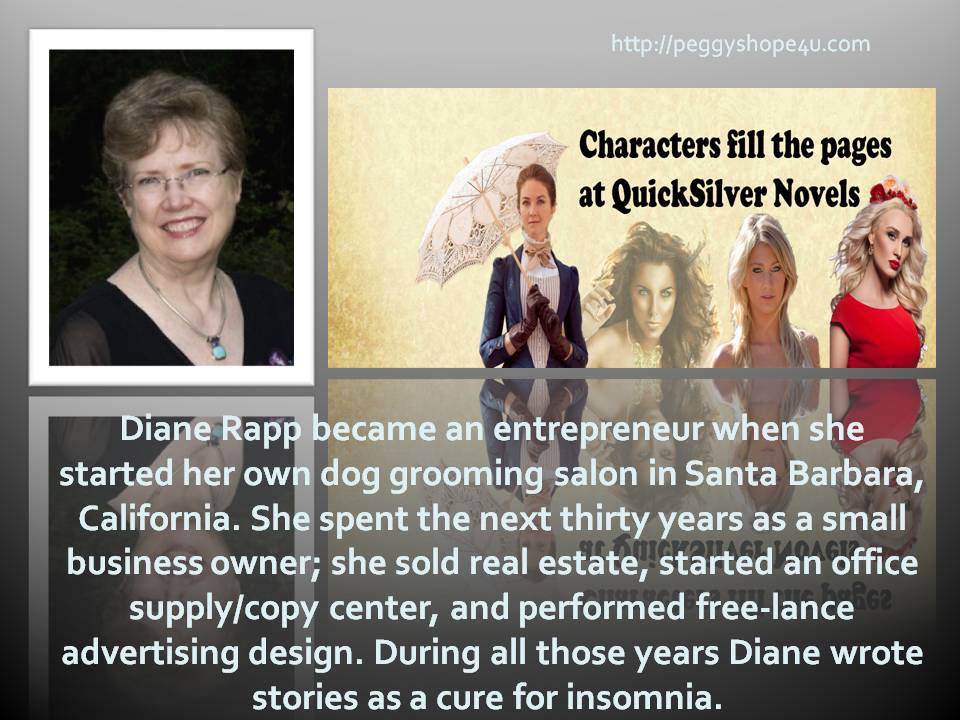 Journey from Dog Groomer to Author

Diane Rapp became an entrepreneur when she started her dog grooming salon in Santa Barbara, California.

She spent the next thirty years as a small business owner; Diane sold real estate, started an office supply/copy center, and performed free-lance advertising design. During all those years she wrote stories as a cure for insomnia. Our Saturday’s Pick Author wrote short stories about dogs for a local German Shepherd Dog Club newsletter, and then expanded to full-length novels.

After Diane and her daughter Laura co-authored a travel guidebook entitled Cruising the Eastern Caribbean (Hunter Publishing published four editions) Laura gave Diane the idea of writing a mystery set on cruise ships in the Caribbean. Murder Caribbean-Style and Murder on a Ghost Ship are the first two novels of a High Seas Mystery Series. The third book, Murder for Glacier Blue, features a wedding cruise to Alaska.  Diane sent her characters to search for a gold mine in Colorado in her newest mystery, Golden Legacy, which incorporates the Journal of a lady from 1888 into the story line.

Heirs to the Throne Series

Howl of the Wolf was the first book in Diane’s Heirs to the Throne science fiction series. It introduced the planet Drako, telepathic wolves, and the crew of the spaceship that took sanctuary in a world that banned technology.

In the second book, The Havenshire Resistance, Krystal’s teenage daughters must learn to use inherited powers and join an army of Samurai women, telepathic wolves, and commoners to save the kingdom from the evil plans of Jarrack.

Dragon Defense is the third novel in the series. Donovan’s group must train teenagers and encourage wild dragons to defend Drako from destruction by the Institute.

That’s a lineup of enough entertainment to take you through an entire summer’s reading binge.

Diane Rapp, Welcome to Peggy’s Hope 4U.  Let’s begin with your Caribbean Cruise book series. I’ve never taken a cruise to the Caribbean. What would you recommend I put on the top of my list of places to go?

My favorite island to visit is Domenica, the nature island.  It was originally a French island but gained its independence.  A large island, Domenica enjoys volcanoes, rain forest, beautiful beaches and a rural atmosphere.  It has not been ruined by tourism and the government works hard to protect its natural beauty.  In Murder Caribbean-Style, Domenica features heavily in the story line.

Are there any tips you’d like to share to help people who are planning a trip to the Caribbean to keep them safe and healthy?

Keep well-hydrated in hot climates. Wear plenty of sunscreens, hats, and sturdy shoes. (I wore flimsy sandals and ended up in the hospital with a dislocated ankle)

Don’t flash valuables around as you go out sight-seeing (Leave fancy jewelry in your cabin’s safe until dinner onboard the ship); in short, use common sense and you’ll be okay.

What inspired your Heirs to the Throne series?

When I gazed into the soft brown eyes of my German Shepherd Dog, Kriegen, I felt that he was always trying to tell me something.  I started wondering what would happen if dogs did speak telepathically to their humans.

After exploring that idea, I added other elements to my story.  I wondered what the next step in transplants would be; what if scientists developed a way to transfer a human mind into a clone and how society might change as a result.  The ideas blended as my characters met on a distant planet.

We have lived in both Minnesota and Wisconsin where wolves roam the northern parts of both states. What gave you the idea to make the wolves in your books telepathic?

Wolves are social animals who work together in a pack to hunt, raise their young, and keep each other safe.  How do they communicate and teach their young?  It can’t all be through body language.

I wondered if wolves might develop an ability to send messages mentally; they might even be able to “host” the ancestor minds of other wolves to pass along knowledge and pack history.

Why not?  Look at your dog.  He is part of a family; sends you subtle messages until you do what he wants.  Dogs are descendants of wolves.  I describe the way these packs developed in The Alphas, a prequel to Howl of the Wolf.

Your epic fantasy carries an underlying theme of the importance of independence. In an election year, that’s a topic on the minds of every citizen. Why did you decide to write about democracy in the world you’ve created?

People who fought for their freedom were willing to die for it when they established this country.  We may be in danger of “trading” our freedom for gifts from the government.

If people in the future exchanged their freedom for immortality, would the price prove too high over time?

I imagined a society where the administrators of the Transfer process indentured millions of people to work off the debt incurred from getting the medical treatment.

Eventually, everyone became a “slave” to the corporation. Governments lost power and failed. Wars broke out; the Institute expanded its influence throughout the galaxy, and suddenly the value of human life became worthless.  The scientists who invented the Transfer process became a threat to the Institute, and assassins were sent to kill them.

One scientist (Dr. Alexander) and his team escaped to a distant world where technology is banned, and wolves speak telepathically.  The human government is a feudal system where a king rules.  How can these heroes survive and make life better on their adopted planet?  They introduce free enterprise, the right to vote, and the concept of self-government!  These freedoms disappeared in the past, but my characters learned from mistakes in history.  The Council of Elders that governs the Wolves must decide whether to let humans live in their world.  Humans must obey the code of proper behavior.

I have to mention your time as a dog groomer and the fact that no one wants to groom our little blind dog because he’s a fast moving target. Did that part of your life have any influence on writing The Alphas?

Yes, it did.  I learned to groom dogs because I planned to become a professional dog handler.  Every new dog groomer attracts customers with biting dogs.  I groomed dogs that used me as a target and learned to deal with them gently.  Sometimes I had to tranquilize a few before I rapidly shaved them down; before they woke up ready to bite me.  Also, I developed a way of laying a poodle across my lap to groom the feet (while the dog’s head was under my arm)…they often fell asleep during the process.

My dream of becoming a dog handler changed.  I discovered that I hated the life of traveling to dog shows with a dozen barking dogs in tow, and gave up that idea for selling real estate.  I never gave up my love of dogs, and we always have at least one dog in our family.  Kriegen passed away a couple of years ago, but we found a new best friend, a very smart Standard Poodle.  Bentley may appear in one of my future stories.  He’s an acrobat, full of energy and mischief.  We love him!

When you read books, what’s Diane Rapp’s favorite genre and why?

I love science/fantasy.  My favorite series was Anne McCaffery’s “Dragon Riders of Pern” and I enjoyed Marion Zimmer Bradley’s Darkover Series.  I also love to read cozy mysteries.  I have an entire collection of Agatha Christie and Arthur Conan Doyle.  When I plan to write in a chosen genre, I read books in that genre to get my mind into the right atmosphere.  I often reread old favorites to see how the author created their magic.  When I wrote Golden Legacy I introduced a historical character, so I read some historical novels in preparation.  The language is very rich and difficult to achieve without sufficient research.  I had to investigate clothing, items that had been invented by 1888, and the process of mining and producing electricity from rushing water.  I doubt I’d do that again but loved the result.

Who’s your favorite character in your books and do they have the character traits of someone you know?

I modeled Kayla, the heroine in my mystery novels after my daughter, Laura (with her permission).  Kayla has the mannerisms and the personality of my favorite girl.  Laura’s husband, Darren is the model for the character of Steven, a proper Englishman, but Darren never worked for Interpol or performed magic.  That comes from my imagination.

As I said earlier, my beloved German Shepherd Dog, Kriegen, was the model for the main wolf in my Science/Fantasy series.  He looked like the beautiful dog on the cover of THE ALPHAS.  He was intelligent and loyal.  We miss him a lot.  I have enjoyed writing about the villains in various stories.  Villains are so much fun to thwart!

Why did you begin writing stories? 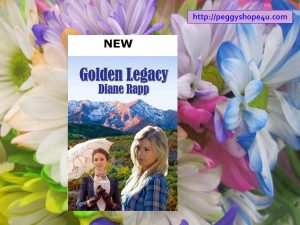 I made up stories since grammar school, but I started writing a lot when I suffered from insomnia as an adult.  I was a Realtor, and the market began to collapse, which made me worry about my clients.  To fall asleep, I read books and then started making up my stories.

It got to a point that I had to write the story down, or it would keep me awake.  I kept pieces of stories in various files until I retired and got serious about writing.  Frequently, I took classes, read books about writing, and I resurrected those pieces to create full novels.

The resulting novels were rough, needed a LOT of editing.  I hired an editor to go through one and learned more than all my college classes.  Eventually, several stories hung together and became a series.  Now I still think about characters before I fall asleep and “dream” up new plots.  My characters drive the plots, often changing things that I thought would happen.

What’s the one thing you’d like people to remember about you and your books?

I want readers to feel that I have entertained them, perhaps made them think about something in a new light.  If I can take a person on a journey with my characters, then I have been successful.

In closing, is there anything else you’d like my readers to know?

I am working on a new science/fantasy novel about the other three scientists who invented Transfer.  Each scientist escaped during the same period that Dr. Alexander and his team fled to Drako.  Where did they go?  What type of planets did they choose to live on beyond Drako?

What eminent danger could make them risk coming back together?  One character resembles a space pirate, another is meticulous and works with robots, while the third loves ocean creatures.  You can imagine where these stories will go.

I’m delighted you joined me today, Diane Rapp! Come back and visit us anytime!

Thank you, Peggy, for inviting me and taking the time to ask probing questions that pertain to my style of writing.  Often I find interview questions are too generic, but this time it was a real pleasure to answer intelligent questions.

You can find Author Diane Rapp at the links below:

Readers, please use the comments below to share your thoughts on Diane Rapp’s books.