It’s another Saturday and this week’s author pick for the kind of flinch-free fiction you enjoy is a fellow ‘Clean Indie Reads’ author from Indiana, D.C. Claymore. Claymore has always had a keen interest in science fiction, and that interest has fueled his imaginative stories. Like many writers, Claymore wrote his tales for years with little thought of publishing a book.

He completed his first Sci-fi novel in 2013 with the encouragement of his wife. The Crystal Conflict preceded Evil Rising in 2014, which won an honorable mention at the Los Angeles Book Festival (March 2016). The third book in the projected 13-book series, The Warriors of Eda launched in February of 2016.

Welcome to my website, D.C. Claymore! I understand you have long been a fan of Star Trek.

How has that influenced your creation of plots and characters who are led on a rollercoaster adventure to other planets by Biron Coomra and his comrades to battle the Forces of Darkness?

Star Trek broadened my imagination.  Not just the idea of life elsewhere, but even more so into the implied technology used in the series.  I was fascinated with how such ideas could be made possible through the plausible application of modern science.  Plus each episode of Star Trek took society’s troubles and showed us a hopeful future where we could work beyond them.

Similarly, Biron boldly barges in when he sees someone in trouble.  He stands up for the weak and pushes back against the powerful, making him many enemies.  Biron has a temper that tends to obscure his gentle nature.  He cares, sometimes to a fault, which gets him into many demanding situations.

You were born in Shelbyville, Indiana, a town of just under 20,000 people sitting in the middle of farm country. How has the farming community influenced you as a writer?

For one, I never got too busy to dream.  So, not growing up in a big City helped.  Always asking ‘what if’ then using my imagination to work it through.  That’s how I started my “character” as I called him.  Not having a father or any good role models left a void in my life which I filled with my “character”.  I dreamed up many adventures that became the seedbed for my book series.  It grew as I did, becoming my personal world where I worked through my life problems.

What is your all-time favorite Sci-fi television show?

I have many shows I liked because of the various themes.  Besides Star Trek, there was Battlestar Galactica, and of course, Firefly.  Each one ‘spoke’, if you will, of hope in different ways.  Even when things become stacked against you and your outlook is bleak, you keep pushing on for the hope that lies ahead.  We all need hope.  A twelve-year-old dreamer even knows that.

I have to tell you; I’m so jealous of your position as an IT administrator and the lift that gives your efforts to market your books. Have you ever considered building simple websites for authors as a side-profession?

I used to be a programmer.  It’s a high-stress job with a quick burnout if you’re not careful.  Unfortunately, I burned out long before website programming became the big thing.  That made me sound old, I know.  I used to build computers after that while being a freelance computer tech.  But that became problematic when everyone wants you to teach them how to use it once you build it.

Certainly, I don’t mind helping where and when I can.  It’s polite and a kind thing to do.  But as for getting back into programming, I will humbly bow out, my dear.  Maybe once I finish writing, I may reconsider.

Is it true your wife is your biggest cheerleader and adds some expertise most of us don’t receive in our author journeys? I’ve learned she’s a former TV anchorwoman/reporter/producer and the editor of your books. How has her expertise streamlined your production process?

First off, it cuts down on the cost.  Editing can be expensive if you want a quality story for your readers.  I’m a technocrat, as my wife calls me.  Intricate plots, technologically plausible societies, and knowledge of the occult add depth to the stories.  My wife adds the icing that rounds out any edges, helps the words to flow even better.  I would go as far as to call her my co-writer.  She’s brilliant, beautiful, and a hard person to pull a fast one on.  Can’t obfuscate a non-answer around her.  That’s what I get for falling for an ex-reporter. 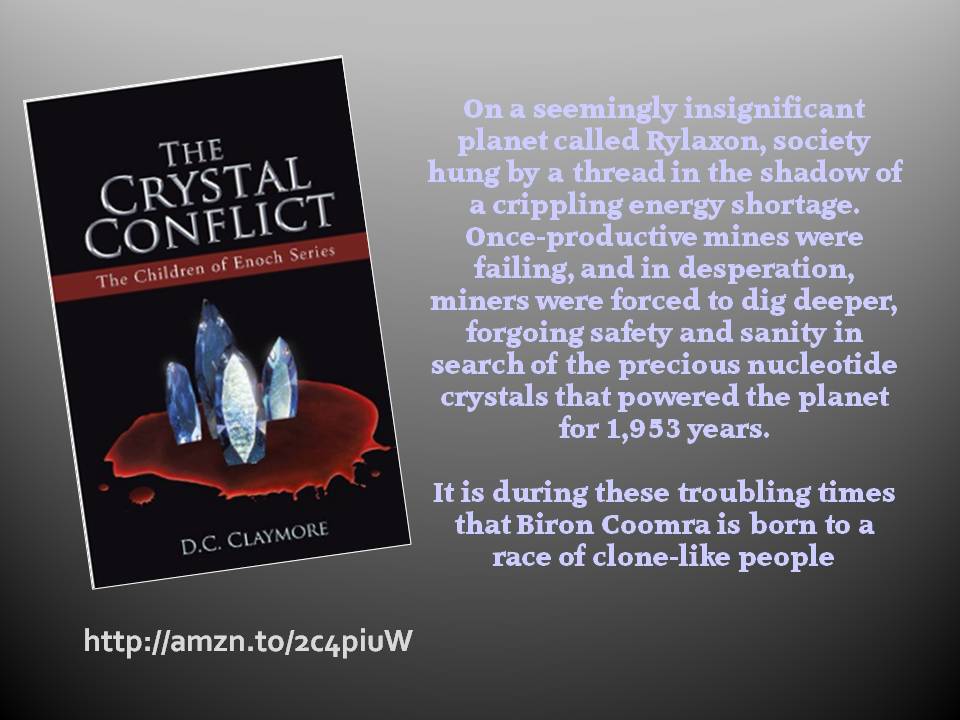 D.C. Claymore has been creating sci-fi fantasy tales since he was about twelve years old. His Children of Enoch series is the product of thirty plus years of his vivid tales and fanciful imaginings. He never expected to become an author. He penned his creations as a tool to encourage his wife, a budding wordsmith and former TV journalist, to write her stories.

When did you develop the inspiration for the planet Rylaxon and the society there? Is there anything in that society that mirrors a concern you have about your planet?

Where to start; Rylaxon and its people are the epitomes of human nature.  The people look so similar that they all appear to be clones of each other.  But even when everyone looks the same, people still find reasons to hate, belittle, and even ostracize others.  Bigotry is a learned trait even if you have hyper-science, flying cars, interplanetary communications, and space travel.  If we can’t accept our small differences, how can we expect to be any better with others who appear nothing like us?

What are Biron Coomra’s most fascinating character traits?

Biron once said, “I’m a mutated, trans-bio, half-breed witch in a society that despises uniqueness.”  Despite being labeled King of the Cedos (the genetically unfit), he cares for others.  He’s a boy finding his way in a society that scorns him while taking the time to help those in need.  In case you’ve never guessed it, I’m Biron Coomra.  There’s a bit of me in all the characters in the series.  Each one was written to connect with someone who reads the stories. 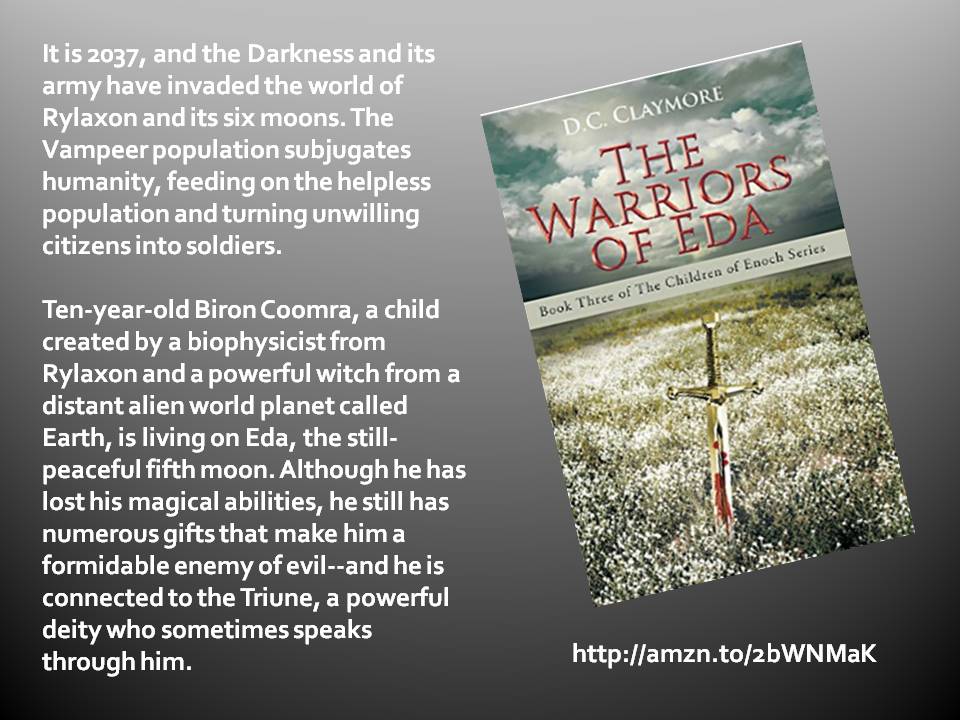 I understand you’re a minister in your community. How has your belief system influenced the Triune in The Warriors of Eda?

In many cases, we are given the opportunity to learn about ourselves as we grow.  Everything isn’t instantly given to us by just asking.  Not every question gets an answer.  The non-answers can seem uncaring.  Sometimes the quiet can be deafening.  The Triune guides Biron to help the boy become more than he could otherwise, a helper for the helpless per se.

How has the Earth changed in the year 2037? Did the witch escape to Eda for a reason?

The time given is the year on Rylaxon.  You reach Earth through the Gateway, a wormhole that formed in the midst of three orbiting singularities in the next quadrant.  But due to the rotational influence, the exit point on the other end of the wormhole travels back and forth along Earth’s timeline (Likewise, if the person journeys in the other direction).  So coming out at an exact time is a complex set of gravitational and temporal calculations that I won’t go into.  (Big Smile)

The witch came back with the biophysicist who visited Earth.  She wasn’t fleeing anything or forced to travel.  The surprising reason is woven into the story line so to reveal it would destroy some of the surprises within the whole series.  And I do promise several such surprises. 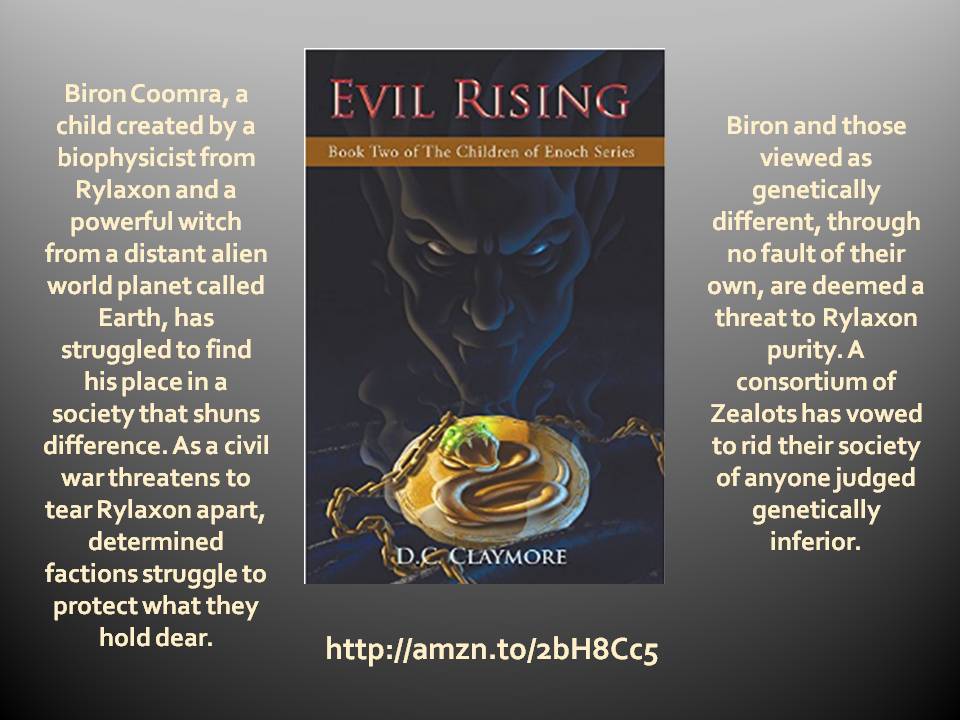 Who is your favorite character in Evil Rising and why?

Biron has always been my favorite; he’s me in so many ways.  But I have such a connection with all the other characters too.  Nimrod, the nanobot-based automaton who is full of logic and always so curious.  Sentinel, a Guardian, who is all about honor, but filled with silent pain.  Biron’s sister, Velma, who is gifted with Magik (not a typo) at such a young age must learn to use it before it takes control of her.  Every character struggles.  Each character grows, learns, hurts, loves.

It’s hard to love just one of the characters.

D.C. Claymore, was it more fun writing about the protagonist or the Zealots?

I’ve heard that some actors find if more fun playing evil characters versus good ones.  But in the story, both sides have funny moments.  I would say I enjoyed it equally.  Here’s why.  As I wrote, it was like the characters had a life of their own.  I wrote down what they did in my head and from time to time twisted the plot to cause more problems.  The one question I kept asking myself as I wrote it out, “How could it get worse?”  Usually, I find a way to cause even more havoc in their fictional lives.

I understand you’re very close to publishing the fourth book in the Children of Enoch Series, “Out of Time.” What can you tell us about this one?

As the series progresses, I keep adding more science fiction/fantasy ideas into the story.  The first book has witchcraft, demons, space travel, hyper-science, and cybernetics in it.  My second book introduces automatons, seraphim, cloning and additional genetic manipulation to create a new race.  Book three introduces super-science and another new race. We’ll see that book four adds the element of time travel.

Teaser for “Out of Time.”

On the eve of battle, Biron does the unthinkable.  To help a friend deal with the loss of a loved one, he changes time.  But, he soon learns his actions caused the unintended deaths of millions of people.  To restore the future, he must go against his Warrior code and kill an innocent boy.  His mission to retrieve the life-saving crystals for Eda takes a deadly turn when he’s trapped deep underground in the flooded mine.  With the forces of darkness rallying for war, will he be able to save himself, yet alone, time?

Watch for Book Four, Out of Time, to be released soon!

You can find D.C. Claymore at these locations:

Thank you for joining us today!

This is your opportunity to ask D.C. Claymore more about his books, using the comments below:

Please add any additional contacts you wish above, and change or delete/add any questions that will help you on the release of the newest book!! Good luck! Peg