Dianne Harman draws her stories and characters from a diverse business and personal background.

She owned a national antique and art appraisal business for many years, left that industry, and opened two yoga centers where she taught yoga and certified yoga instructors. She’s traveled extensively throughout the world and loves nothing more than cooking and playing with her dog, Kelly.

Being a dog lover and having attended numerous cooking schools, she couldn’t resist writing about food and dogs. She is the author of four cozy mystery series: Cedar Bay, Liz Lucas, High Desert, and Jack Trout. Each of these books contains recipes from her travels. She is also the author of the award-winning suspenseful Coyote Series and the Teddy Saga.

Some books in her cozy mystery series have been designated by Amazon as All-Stars because of their sales, and Dianne has been named by Amazon seven times as one of their most popular authors.

She invites you to visit her website and sign up for her newsletters. You’ll receive free books and have a weekly chance to win a Kindle.

Welcome to my blog, Dianne Harman! I so love Huntington Beach, CA and used to travel there frequently with my job. Have you always lived there?

We’ve lived in Huntington Beach for over forty years, so I guess that’s pretty much a lifetime!

What are some of the unique aspects of life in California that sneak into your writing?

My High Desert series is set just outside of Palm Springs. I suppose there are elements of California in all of my books, whether the setting is in California or not. I’m writing a book now where one of the characters is looking at opening a restaurant in Laguna Beach. Certainly, all three books in the Coyote Series have a lot of California in them from the setting to specific places, as do the two books in the Teddy Saga.

I’m intrigued with your Coyote Series novels.  Blue Coyote Motel won some recognition. Can you tell us a little about the series and your inspiration for it?

It’s kind of interesting. My husband and I were in Palm Springs for a wedding in October. It was 107 degrees out, and the air conditioning was so quiet that day. For whatever reason, I said, “Wouldn’t it be wild if someone put a feel-good drug in the air conditioning and everyone felt good all the time?” My husband looked at me and said, “There’s your book. Write it.” I started it that afternoon, and that was the beginning of my writing career.

You have three sets of books available in the Cedar Bay Cozy Mystery series. Do you anchor the series with the location, the characters, or both?

All of the above. The main setting is a small town on the Oregon Coast, but I love to travel, so Kelly and Mike have been to places such as Cuba and the East Coast. I like to incorporate my travels into my books. The main characters are in each book and some others appear from time to time.

When did you first start publishing your writing?

At a rather advanced age. I began when I was 68 and four years later, I’ve never stopped! What a ride it’s been, one I certainly never planned on!

I’m in complete awe of your prolific writing. How many books do you publish on average each year, and how many hours do you spend writing each day?

Thank you. Since I’ve started the cozy mysteries, I publish around 12 books a year. Those are shorter and have a pretty devoted audience who wants more! As far as writing each day, I have to say that a fair amount of time is spent on marketing and then usually several hours on writing. I’m in a unique position, and I’m well aware of it. My husband is retired, my children are out of the house, and I don’t work outside of the home so that I can devote myself to this. Most people don’t have that luxury, and I consider myself to be very lucky because I do.

I think with all this writing, we’re all curious about how you spend your free time. I understand you love to cook, as I do. Is that one of your primary passions?

Yes, it’s been a passion of mine for years. My husband was a California Senator and as such, we entertained constantly. I also prepared five-course dinner fundraisers when he was in Sacramento. I’ve indulged my passion by attending a number of cooking schools, both in the United States and elsewhere.

Please go to www.dianneharman.com and you can download all of the recipes that are in my books. As far as a favorite, I just like to eat and cook! 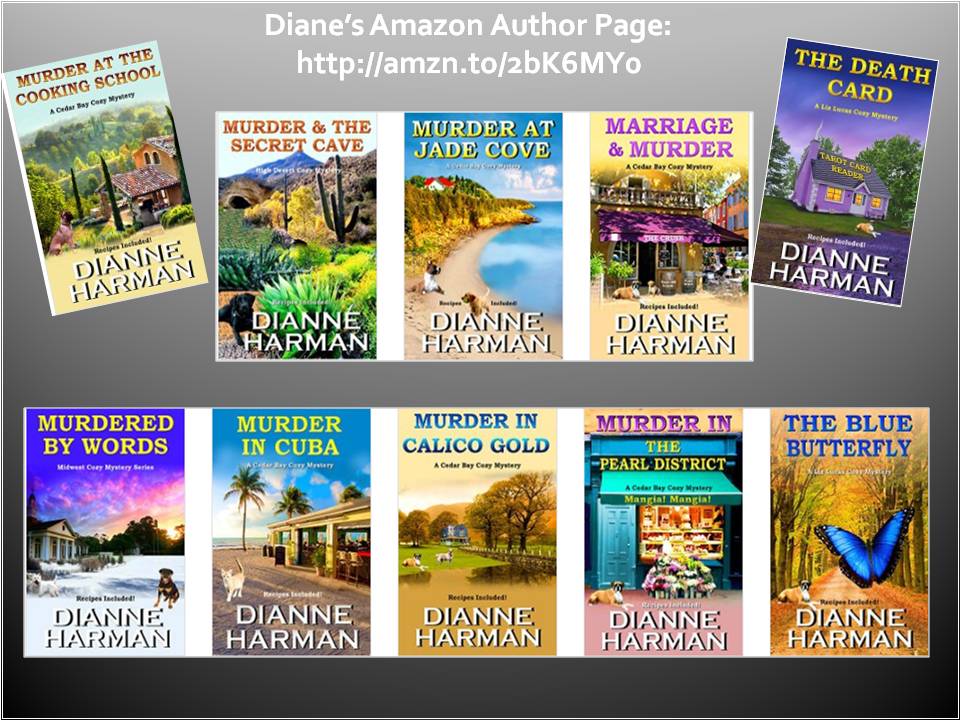 Is your High Desert Cozy Mystery Series based on trips near Los Angeles? (Be sure to let us know if the puppy gets to go too!)

High Desert takes place outside of Palm Springs. My husband’s uncle and three other artists lived in a compound about thirty minutes from Palm Springs. It was fabulous – kind of fairy-like with a central courtyard and trees covered in twinkling lights. I’ve never forgotten the uniqueness of that compound, and I incorporated it into the series. And yes, we have taken numerous trips there. The latest being a scouting trip for Murdered by Country Music, which is loosely based on the music festivals there. And puppy does go, although she finally has reached the status of not chewing everything in sight!

Congratulations! I understand your Murder on the East Coast sold over 1,000 copies in the week following publication in August, with over 40,000 pages read. What’s it like to have a raging success right out of the gate?

It feels good. I love when readers enjoy my books. That’s the icing on the writing cake for me.

Your Liz Lucas Cozy Mystery Series would be a perfect addition to the mysteries on the Lifetime Movie Channel or the Hallmark Movie Channel. I can see these as movies involving Liz at the Red Cedar Spa and her husband Roger Langley, a criminal defense attorney. Who would you like to play your leading characters in the movie series and why?

Thank you! As far as actors, I have too many favorites to pick from. I’ll leave that to the readers. 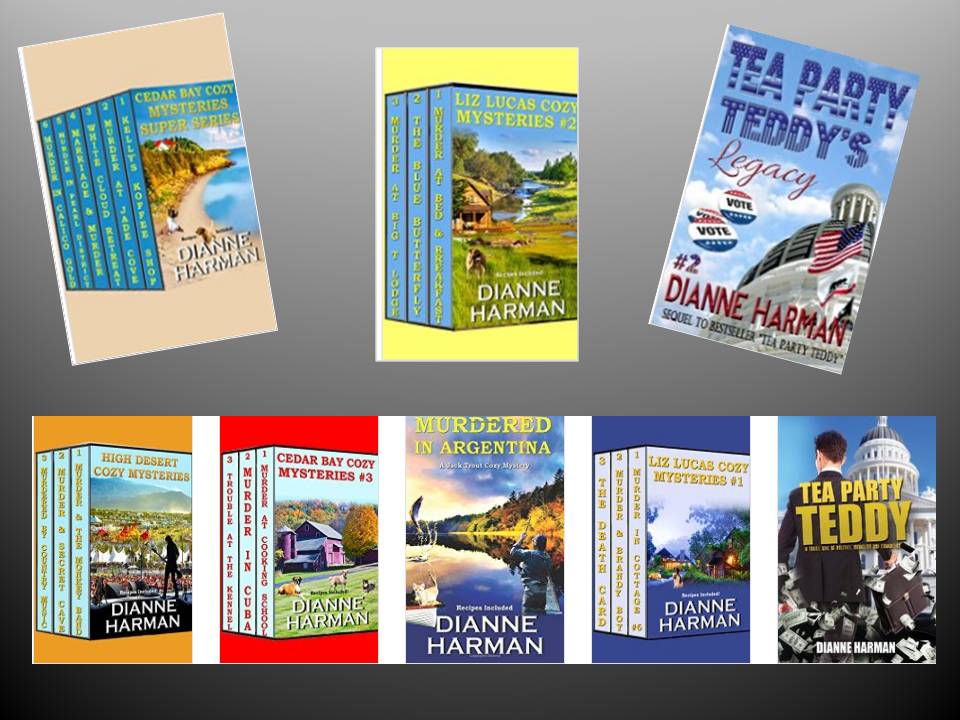 This is the blurb from your book Tea Party Teddy:

Tea Party Teddy is a political tell-all novel about Sacramento, California politics – the public corruption, infidelity, and greed. Teddy, a newly elected Assemblyman, is elected because of his hateful anti-immigration platform. When he gets to Sacramento, he struggles with the temptations that ultimate power affords. His world slowly unravels as he succumbs to the power of his office. The ultimate irony occurs when his wife becomes romantically involved with the founder of the Republicans for Latinos. This is the book Sacramento politicians said shouldn’t be written. Although the characters are fictional, the events and places are well-known to Dianne Harman, wife of a former California State Assemblyman and Senator.

I would think Tea Party Teddy and Tea Party Teddy’s Legacy are extremely popular in an election year. The political arena is ripe with inspiration for writing, but it’s a bit removed from your cozy mysteries. What passions drove you to write these books?

I think there’s a lot of apathy around politics. It’s certainly not the most popular genre, and in some ways, I think people are fed up with it. That being said, yes, there definitely has been more interest lately. I titled it Tea Party Teddy, and it was published long before I’d ever heard of Ted Cruz. The name just seemed to fit, but it’s not about him.

Murdered by Words is the only book in the Dianne Harman Midwest Cozy Mystery Series. Having lived in Iowa, Minnesota, and now Wisconsin, I do have to warn you the pups on the cover should be buried in the snow up to their little eyeballs to be more realistic for this area. What’s the location of the next book, and why?

The location of that series is a small college town in Kansas, probably because I went to a small college town in Kansas. And as far as the dogs, I freely admit I took literary license with them in the snow! The finishing touches are being put on the second book in that series, Murder at the Clinic. I was at my acupuncturist getting treatment for low back pain – too many hours at the computer – when I said to him, “What would happen…?” He looked at me and answered, “In twenty years of treating people no one has ever asked that. Your mind doesn’t work like normal people.” I agreed and told him I thought normal was highly overrated, and thus the book was born!

Another question we’re interested to learn the answer to is which series has provided the greatest challenge to you in writing and why?

I’ve had fun writing all of them, and I don’t think one series is more challenging than another to write. I just sit down, sketch out who’s going to get killed and who the suspects are, and I go from there!

Which series brought you the greatest satisfaction in your creative endeavors and why?

I get a lot of feedback that people love the banter between Kelly and Mike in the Cedar Bay Series. I’m glad people find enjoyment from a healthy marital relationship, considering what is always in the news!

Share something with us that readers don’t currently know about Dianne Harman:

I have to start my day out with a crossword puzzle and Sundays are my favorite. I almost feel sad knowing I’ll have to wait another week for the long puzzle. Yeah, I know, that’s kind of pathetic.

I want to thank you for doing such a beautiful job with this interview. I really appreciate it. Thank you so much for having me!

It’s not pathetic at all to do crosswords. We do that every Sunday down on the Gulf Coast in the winter months!

I’d like to thank Dianne Harman, a Bestselling Amazon Author of Cozy Mysteries & Suspense novels, for visiting my website today. To get several of Dianne’s books for Free, please go to http://www.dianneharman.com