Elle Burton and the Reflective Portals 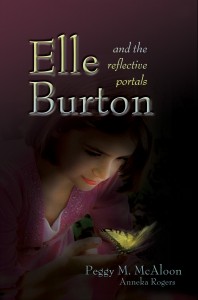 Elle Burton is an ordinary kid…or so she thinks. On her tenth birthday she encounters Eunie Mae, a tiny, fairylike being who comes from a world called Fiori. She begins a journey that leads her from this world into another dimension through reflective portals where creatures called Fiorins are linked to all human life.  Other than some children under the age of eight, the only human beings who can see Fiorins are guides—people who have been chosen to help protect the children of Earth.

Being a guide seems like the opportunity of a lifetime. Elle has always loved helping others, and now she’ll have magical assistance. But not everybody wants her to succeed. There are evil forces that do everything in their power to keep the guides from offering support to those in need.

Join her as she enlists the Fiorin warrior Amadeus and others to help her protect the human children against bullying and physical abuse. The children at risk Elle encounters are dependent on her decisions and quick responses.  Travel with her to Fiori and discover magical foot lockers, spider elevators, and the beloved Pegasus. Join her journey on the crusade to protect the world’s children.  Her journey to adulthood begins as she completes the three challenges, predicted centuries ago.  She is a modern-day role model who embodies everything that is good in this world. Will she be strong enough to combat the problems children face in the 21st Century?

“Elle Burton and the Reflective Portals” can be found  on Amazon and other online sources or at:

“Though Elle Burton and the Reflective Portals was written for a younger audience, I found myself quickly involved in the story line and pulling for Elle and her friends, both human and not. Who would know the little guys would have some of the same qualities and problems as the rest of us.”

“This YA fantasy novel is a breath of fresh air.”

“Elle deals with everything you could imagine-monsters, magic, bullying, even death. Yet, through all that, she stays strong and always makes the right choices. Elle is a great role model for kids, and I would recommend for everyone to give it a read! I can’t wait for the sequel!”

“The book will take your through an emotional journey through the eyes of a child and perhaps your own personal journey as well. I am excited to read the next book….”

“I started this book and honestly was hooked in the first 10 minutes. It’s an excellent story, so well written, and had me captivated the entire time”

“The heroine of this book, Elle (pronounced Ellie) has a kind heart and wants to help other children. Elle has the aid of magical little creatures called Fiorins and visits their enchanting homeland in another dimension. There is adventure aplenty, and a sequel is in progress.”

“Loved it! Easy read. The non-stop action keeps you engaged from start to finish. This is a book for all ages. A magical adventure. I cannot wait to read book 2.”

“This book is recommended for children but I’m an adult and I thoroughly enjoyed every minute of it, too.”

” All the children of the world could get great benefit out of reading this book. It’s inspirational and there are great lessons to be learnt about being compassionate and kind to one another. It will empower and encourage children from all walks of life to walk better paths.”

“Young children will be enchanted, teens will find it refreshing and adults will want their children to read it. Elle Burton and the Reflective Portals is a book I couldn’t put down. It is a fantasy written beautifully to the point it’s almost real.”

“Peggy McAloon has written a beautiful story about universal struggles of children. To name a few, her protaganist, Elle, deals with death, illness, bullying, good vs. evil, making mistakes, forgiveness, and responsibility. However, this author has managed to make these often heavy themes real for readers with incredible delicacy, grace, and, sheer magic.”

“It was well written and I have already recommended it to a few friends and relatives. I love how it made my imagination come back, and it brought back some childhood memories.”

“An entertaining and fun story….great message to children…how to make a difference in the world by the way others are treated and what can be done to help those who are mistreated. The fantasy makes it magical. A book to be enjoyed by adults and children alike.”

“What an adventure I’ve been on with Elle and the amazing world of childhood imagination.Peggy McAloon gently led me page by page through challenges that children face in their early years.”

“We meet spirits with butterfly wings who watch over small children—but that won’t hesitate to hack into a computer when the need arises. In this world Elle becomes a guide called to protect the children she encounters. It’s a page-turning story with monsters and magical creatures. Elle is fun and feisty and brave.”

“It is our natural instinct to protect the children in our lives, but do we protect them too much? The very real threats and issues children face today are usually swept aside in literature, because we believe that our children could not handle the truth about violence, abuse, and even bullying? However, I wonder: by all of this protecting, do we in fact leave our children vulnerable to the very real threats surrounding them? Do we prevent them from finding strength in themselves to stand up for their peers?After reading this book, I have come to a conclusion that this book should be included in every school’s curriculum, beginning with the first grades of Elementary and Middle Schools, and maybe even High School.What Ms. McAloon and Ms. Rogers have done is to create a book series with familiar elements of fantasy, that is nevertheless grounded in the real world with very real threats I did not discover until I was well into my teens. Elle (pronounced Ellie) is an extraordinary child, as well as a very ordinary little girl; she loves to wear pretty clothes, play with her friends, and does her homework regularly. However, at the beginning of this series destiny places a great honour, and a greater burden, on her ten-year-old shoulders; Elle is to become a Guide and help the fairy-like creatures called Fiorins to protect the children of our world”

“I find our society is obsessed with beauty way too much as it is, and in my case I blame the fairy tales. However, though Elle is beautiful, she is also extremely good. She is not perfect (that would be annoying), she messes up mostly because she does not take the time to think, and because the terrifying situations she is placed in sometimes scramble her brain. Nevertheless, she is a better child than I ever was. (This is probably the reason she was chosen by Fiorins.) This book, though written for children, is an enjoyable read for adults as well. I sincerely hope if there is a teacher, librarian, principal, etc. reading this review that they will pick up a copy of this book and give it a chance. I’m sure that they too would see the wisdom of  having it in their schools.For myself, I can’t wait to read the next book in the series.”

“Peggy McAloon and Anneka Rogers have created an especially gentle tale about an ordinary girl who discovers she has certain phenomenal powers on her 10th birthday. On this very day, Elle is faced with two extraordinary events, one that is tragic, one that is joyous. This is the day she learns that she can wish herself to a world filled with beauty and protection and knowledge: the land of Fiori. This is where she meets her guide, in the form of little petal soft fairy-like creature and Mother Blue, protector of all children. And it is on this day that she embarks on a journey that will not change her life forever but change the lives of thousands of other people.”

“Much like a chrysalis, Elle Burton and the Reflective Portals is a charming book that follows the evolving Elle from a sheltered, naïve kid, to a self-aware courageous young girl. Her story is woven in a way that kept this reader engaged and interested, even though this is not my favorite genre. The tale immediately brought back memories of my own childhood that had me longing, and imagining I had my own little friend that I could hold in my own hand. That and the fact that the authors used my own nickname (Ginny) for one of the primary characters. And I’m half Manx!”

“For me, as a full-fledged adult reader, the only drawback about the book is the disconnect between the characters’ emotions and some of the events in the book. As an example, right at the beginning of the book a family tragedy took place. This seemed a bit too matter of fact to me, and was over and done within a couple days’ time. I guess I wished for more soothing interaction between the grandparents and Elle.”

Catherine Gruener, the child counselor who prepared the discussion sheet posted in Google+

“Thank you Peggy for an amazing story of resiliency, compassion, and agape love, rolled into an epic fantasy adventure filled with heart-racing and heart-tugging drama. I’m glad that you took the time to introduce yourself in the community, and thank you for allowing me to be a guide, with you, in the discussions from your book.

Yes indeed, Anneka not only saved Jimmy, but brought bullying and how to deal with bullies from a community level, into a new and positive direction.

…As Peggy said, it is a fantasy book about a heroine, with the help of magical creatures and powers protecting children from these social ills. Elle not only witnesses, but engages with these issues through her personal experiences throughout the book (Kind of like spider-man only a 10 year-old  girl with magical creatures, a magical land, and magical powers that don’t come from   a spider bite. Or perhaps like The Lion, The Witch and the Wardrobe. It’s hard to compare to anything really, as it is a very unique story. Perhaps one day we will say…kind of like Elle Burton and the Reflective Portals). I also think that it is important to discuss how Elle’s magical powers and friends empower her to combat these social ills, and how we can combat social ills in safe and connected ways (since we don’t have magical powers).

I have to admit +Peggy McAloon, I have not stopped thinking of your book. The book sits with you for days, and so many questions and discussions could ensue. Two pages of questions could have been 10, but I didn’t want to over-burden your readers. Much appreciation again. Looking forward to the discussions to follow.”

This is not a book I would normally have picked to read since I write mystery/suspense thrillers. I would have missed a great read. Though “Elle Burton and the Reflective Portals” was written for a younger audience, I found myself quickly involved in the story line and pulling for Elle and her friends, both human and not. Who would know the little guys would have some of the same qualities and problems as the rest of us. And I found myself cheering for bad guys as they became better people.
Needless to say, I liked the book. Bet you will, too, if you give it a chance. After all, don’t we all have a little “kid” left in us. How sad if we didn’t!
Joe Shumock 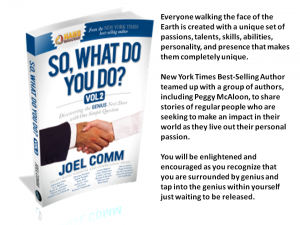 Genius Next Door with One Simple Question